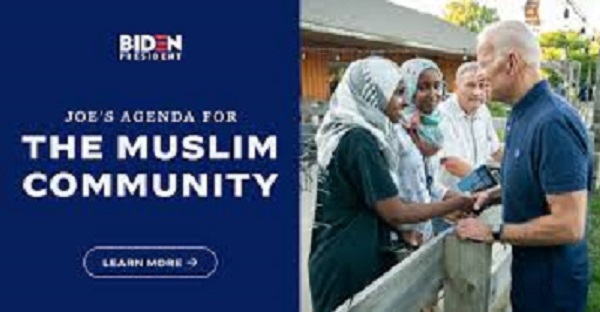 The 2020 American presidential election will be historically remembered as a unique election. A contested, undecided race is not new, but the media’s hype, backing, and declaration for one candidate are unprecedented.  Ultimately, the delay caused by the election investigation will be to expose the use of comprehensive fraud within the voting procedures of American elections, past and present. Statements by individuals witnessing voting poll crimes in the form of affidavits are appearing every day.

Once the final verdict is reached and Americans and the world are informed of who will lead the country for the next four years Americans can do nothing less than demand a permanent fix of the election process. This seems to be a goal of the current administration. This truly is unique.

If anyone thinks a presidential outcome for Biden could occur without the empowerment of Islamic radicals then think again. Take a look at the current fervor in the Middle East over Biden’s premature presidential declaration. The Muslim Brotherhood’s (MB) overwhelming enthusiasm for the media’s Democrat “President-elect” is revealed all across the Arabic-speaking media.  Certainly, they stand to gain by a Biden win and also the reverse, much to lose with a Trump win.

Muslim Americans and the Muslim Brotherhood will thrive under Biden

Some world leaders, including the Muslim Brotherhood Deputy Morshed, have already congratulated Joe Biden, the media’s unverified choice for president. The Arabic media reported that the MB issued a “victory” statement while Deputy Morshed gave the following official statement, “Biden victory proves that the American people can still impose their will.”

The Deputy Morshed no doubt refers to media reports of more than one million Muslim-Americans (the highest number ever) voting for the Democrat presidential candidate and gives credit to them for Biden’s success. According to the Al Jazeera and Anadolu Agency, Council on American Islamic Relations (CAIR) promised to deliver Joe Biden these votes. Since the Sharia sheep always follow the wolf these votes could actually prove to be legal.  Brotherhood members form the majority of CAIR’s board of directors. The pro-MB Arabic media are now highlighting how gratified Muslim-Americans are for the Biden “win.”

The Arabic media goes on to express satisfaction felt by Muslim-Americans with Biden’s pre-election promise to lift the ban imposed by Trump on citizens of seven Muslim countries, which now prevents them from entering the United States.  According to further reports, Muslim-Americans expect Biden to denounce Islamophobia and racism against Muslims in America and around the world.

Meanwhile, Arabic reports show that enthusiasm by the Muslim Brotherhood, a designated terrorist organization in Egypt, is at an all-time high with Biden — perhaps hopeful for another Obama/Biden experience like the one that elevated the MB to power not so long ago with the striking role played by the former American President and his Secretary of State, Hillary Clinton, during the wave of the infamous Arab Spring.

Besides Egypt, media from other Arab countries, sympathetic to the Egyptian Muslim Brotherhood and its activists, reported the MB openly prayed for Biden to win and watched election results closely as it reported on Biden’s progress. Meanwhile, Trump is mocked for his speech about fraud on behalf of Biden and for using the courts to resolve the issue as the MB observes the crime of voter fraud with the familiarity and regularity of one of its own candidates in Egypt.

The MB is not without a direct stake in the Biden “win” game with certain down-ticket candidates. Five Muslim Democrat congressional candidates will be newly elected if the race holds up before the courts while two incumbents could be re-elected, all from the following states: Delaware, Michigan, Minnesota, Oklahoma, Wisconsin, and Indiana – making a potential total of seven Muslim-Americans elected to congress. One hundred and ten Muslim candidates ran across 24 states plus the Capitol and over fifty percent, as it stands now, have won across local, state, and federal offices. The question is where do their loyalties lie.

According to Egypt’s Albawaba news, a research media institution specializing in the movements of political Islam, the Muslim Brotherhood’s right-hand organization outside of Egypt is the Council on American Islamic Relations. CAIR members who are also MB members donated to American candidates this cycle including Joe Biden. Brotherhood member and public relations officer of CAIR, Al-Sharqawi, played a major role in raising money for the Biden campaign, the MB reported. CAIR heavily backs US Rep. Ilhan Omar and equates her political grooming and the Biden “victory” to its pursuit of “Congressional Jihad.”

The engineers behind the American presidential election seem to have taken a lesson from Egypt’s presidential election after the removal of Mubarak in 2011. Mohamed Morsi, the Muslim Brotherhood candidate, ran against Ahmed Shafek, a former military officer and twice Egyptian Prime Minister from the Mubarak era – an accomplished and formidable opponent.

Rigging ballots, exchanging votes for cash or food, and other illegal tricks brought about a winning result for Mohammed Morsi. The final outcome was calculated after several days, and the announcement was postponed several times. The dreadfully unpopular Morsi had become president. When President Obama heard the good news of a Muslim Brotherhood president in Egypt, the USA offered congratulations to Morsi as the first foreign country to respond. Now the MB Deputy Morshed is among the first to congratulate Obama’s vice president, Joe Biden.