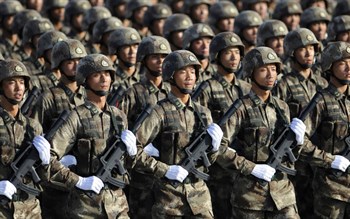 [This is an article by J.M. Phelps of One News Now based on an interview with CCNS member Col. Lawrence Sellin (U.S. Army Reserve-Ret.)]

A former Army officer contends the U.S. troop withdrawal from Afghanistan will bolster a number of geopolitical shifts, giving China an advantage in the region.

On March 25, in his first press conference since taking office, President Joe Biden expressed that the upcoming May 1 deadline to remove U.S. troops from Afghanistan will be “hard to meet,” citing “tactical reasons” for a possible delay. The United States has been at war in Afghanistan for two decades, and efforts to extricate itself increased exponentially during the Donald Trump administration upon the signing of a “peace deal” on February 29, 2020.

Under that agreement, the U.S. committed to withdrawing all U.S. military forces from Afghanistan, while intra-Afghan dialogue and negotiations between the Taliban and the existing Afghan government were called upon to resolve the conflict and stabilize the South Asian country.

One News Now spoke to Col. Lawrence Sellin (U.S. Army Reserve-Ret.) and about what has become recognized as America’s longest war. “At best, the Afghanistan conflict is a stalemate,” states the veteran of that conflict as well as the one in Iraq.

“For U.S. forces, [the conflict] ceased being a military operation a long time ago,” he admits, adding that “[American troops] merely provide an interim presence, while the Afghan government and the Taliban attempt to resolve their differences and form some type of interim government.” And this, he determines, could allow U.S. forces to leave the country, anticipating the violence to “remain at a low boil” until then.

However, the end result isn’t expected to fall in the favor of the Islamic Republic of Afghanistan.

“When the U.S. troops withdraw and, presumably, the NATO forces with them,” Sellin suggests, “the Afghan government will collapse within six months and be replaced by the re-establishment of the Taliban Emirate” – the jihadi proto-state established in September 1996 known as the Islamic Emirate of Afghanistan.

Neither the Biden administration nor Pentagon leadership wants this to happen on their watch, according to Sellin. “The U.S. troop presence will linger on until it becomes unsustainable or some type of superficially graceful exit is arranged,” he adds.

The Taliban recently threatened to “continue its Jihad and armed struggle against foreign forces to liberate its country” if the U.S. and NATO forces remain in Afghanistan past May 1.

“Without a significant escalation,” Sellin indicates, “a continuation of the jihad by the Taliban will not produce a major change in the trajectory of the conflict, [because] the Taliban knows that time is on its side and that the U.S. is on the brink of withdrawal.”

In addition, he notes, “the Taliban are being restrained by Pakistan under the direction of China because of the pending geopolitical shift in South Asia.”

The retired Army reserve officer argues that “upon U.S. withdrawal, China will determine the future of Afghanistan, which will be geographically sandwiched between two Chinese client states: Pakistan and Iran.”

Adding to the reduction of U.S. regional influence, at the end of March, China and Iran signed a massive 25-year economic and military cooperation agreement. Under that agreement, Sellin is convinced “China will exploit Afghanistan’s natural resources, and its stability under Chinese-Pakistani management of the Taliban regime, will greatly enhance the possibility of success for the China-Pakistan Economic Corridor, which is the flagship of China’s Belt and Road Initiative.”

Sellin asserts: “It will also facilitate the establishment of Chinese military bases on the Arabian Sea, providing the link between its naval base in Djibouti near the entrance of the Red Sea and the Suez Canal and China’s bases in the South China Sea.”

Ultimately, the retired Army officer concludes, “it will allow China to control the vital sea lanes of the Persian Gulf and the northern Indian Ocean” – as well as the economic and military isolation of India, a U.S. ally and formidable force of the region.

(This article was originally published at One News Now.)

One thought on “Military Veteran: China Wins When U.S. Withdraws from Afghanistan”