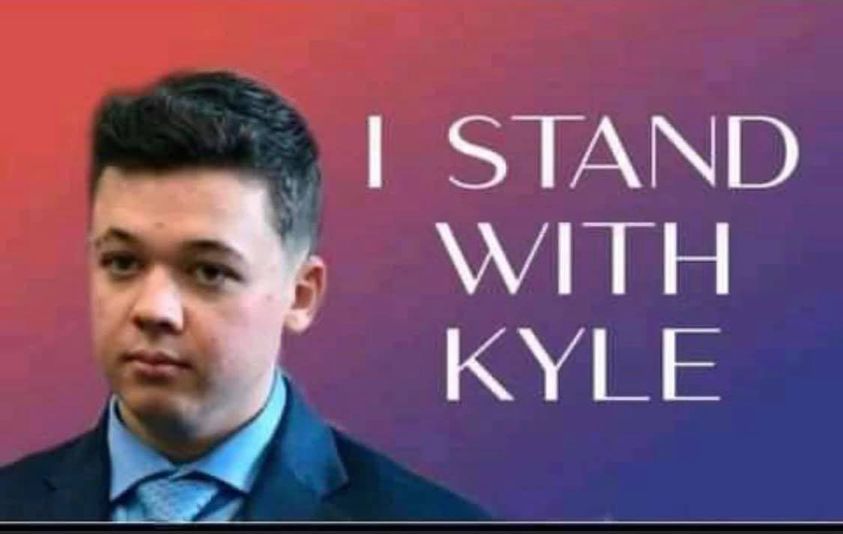 The Second Amendment right to keep and bear arms is what has really been on trial in the Kyle Rittenhouse proceedings in Kenosha, Wisconsin. His use of that “giant gun,” as the liberal cable media describes his AR-15, to defend himself has been on trial, not the rioting, looting, burning, and killing that has occurred in the BLM/Antifa riots that ravaged the nation in 2020’s “mostly peaceful” protests.

That he successfully defended himself with that AR-15 against a less than stellar cast of pursuing potential murderers that were part of a raging mob of leftist loons is irrelevant. Kyle Rittenhouse was white, male, and bearing arms the Constitution of the United States said he could, therefore he was guilty as charged. Meanwhile, actor and producer Alec Baldwin roams free after killing his Director of Photography, Halyna Hutchins, on the set of his movie, “Rust,” after failing to practice the gun safety gun control zealots scream about. Guns in the home to protect you and your family are dangerous and should be banned. Hollywood prima donnas recklessly waving and pointing guns at their movie crew members are not worthy of condemnation or accountability apparently. The irony in the Rittenhouse and Baldwin cases, aside from Rittenhouse being on trial for ending someone’s life with a gunshot while Alec Baldwin is not on trial for ending someone’s life with a gunshot, is that the only truly innocent person to die in these cases was shot by Alec Baldwin.

Kyle Rittenhouse was not chased and hunted down by the Vienna Boys Choir:

Joseph Rosenbaum, a 36-year-old residing in Kenosha, was the first man who Rittenhouse fatally shot on the evening of Aug. 25, 2020.

Drone footage of the encounter appears to show Rosenbaum chasing Rittenhouse before the teenager turned around and fired four shots at close range, fatally striking Rosenbaum.

Rittenhouse testified that he acted in self-defense after Rosenbaum threatened to kill him and tried to grab his gun, but prosecutors argued that Rittenhouse provoked Rosenbaum earlier in the evening.

Hours before the fatal encounter, Rosenbaum had been released from a local hospital in the wake of a suicide attempt, the Washington Post reported last fall.

He had pending charges in Wisconsin for alleged domestic abuse and jumping bail at the time of his death.

In December 2002, a court in Pima County, Arizona, sentenced him to a decade in prison on child molestation charges. He spent just over 14 years in prison and committed dozens of disciplinary infractions, state records show. 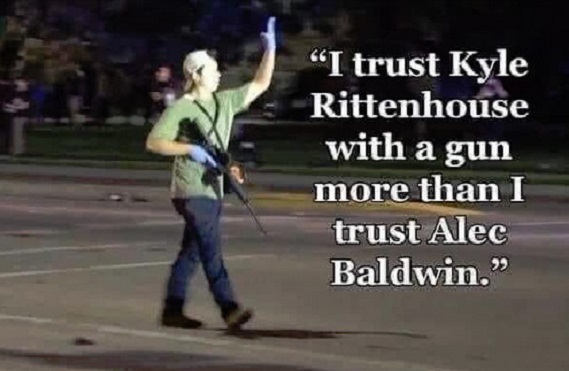 Wisconsin court documents show that Huber was convicted of domestic abuse and disorderly conduct in 2018. He also served a prison stint in 2012 for choking his brother.

Had Huber knocked Kyle, would he have continued hitting him with the skateboard till he was dead? Would he have attempted to choke Rittenhouse to death or grabbed Kyle’s gun and shot him? Kyle’s crime was not waiting to find out. Kyle’s crime was self-defense and not wanting to die at the hands of a pursuing attacker. Finally, there’s Gaige Grosskreutz, who has a felony burglary charge on his record and was illegally carrying a concealed handgun, traveled farther to get to Kenosha than Kyle did, 51 miles versus 21, and admitted under oath that Kyle shot him only after he raised his gun and pointed it at Kyle:

A third man, 28-year-old Gaige Grosskreutz, was shot once in the arm after approaching Rittenhouse with a handgun.

Grosskreutz testified at trial that he pointed his handgun at Rittenhouse before being shot, but said it was unintentional…

Grosskreutz also testified that the concealed weapon permit for his handgun was expired the night of the shooting.

The only one to live and tell about the assault on Kyle Riuttenouse, Gaige  Grosskreutz has had a, let’s say, checkered past, according to the New York Post:

The only survivor of the 2020 Wisconsin shootings by teenager Kyle Rittenhouse has a lengthy criminal record that includes burglary, drunk driving, and a domestic incident, according to a new report.

Gaige Grosskreutz, 28, was in court just six days before Rittenhouse’s murder trial — where he was a star witness — to have a recent drunk driving charge dismissed “on a technicality,” the Daily Mail reported Monday.

Yet Grosskreutz’s list of prior scrapes with the law was not revealed to the jury when he testified at Rittenhouse’s murder trial that he attended demonstrations in Kenosha on Aug. 25, 2020, to serve as a paramedic.

But records reviewed by the Mail show that Grosskreutz has a criminal record dating back more than 10 years, the outlet said.

On Aug. 16, 2020, just days before the Rittenhouse shootings, he was arrested by cops in West Allis for allegedly “prowling” when he was nabbed videotaping police vehicles in a police department parking lot around 1 a.m.

“Gaige appeared to be videotaping personal vehicles in the rear police parking lot,” according to a police report obtained by the Mail. “Gaige made clear his anti-law enforcement views. Gaige was arrested for prowling, booked, cited, and released.”

On May 9, 2015, Grosskreutz was stopped by police in Greenfield, about 40 miles from Kenosha, after cops reported he had “bloodshot and glassy” eyes — with the officers recovering a 9mm Glock 19 handgun from his vehicle.

In 2013, he was charged with smashing the bedroom window at an ex-girlfriend’s home at 4 a.m., with the woman claiming he had been harassing her on the phone.

One year earlier, was hit with a felony burglary charge in New Berlin when cops said he was caught trying to sell three stolen PlayStation consoles, the outlet reported.

And in 2010, Grosskreutz was arrested and charged with hitting his grandmother in the face during a dispute, during which he also threw a lamp and damaged a wall. 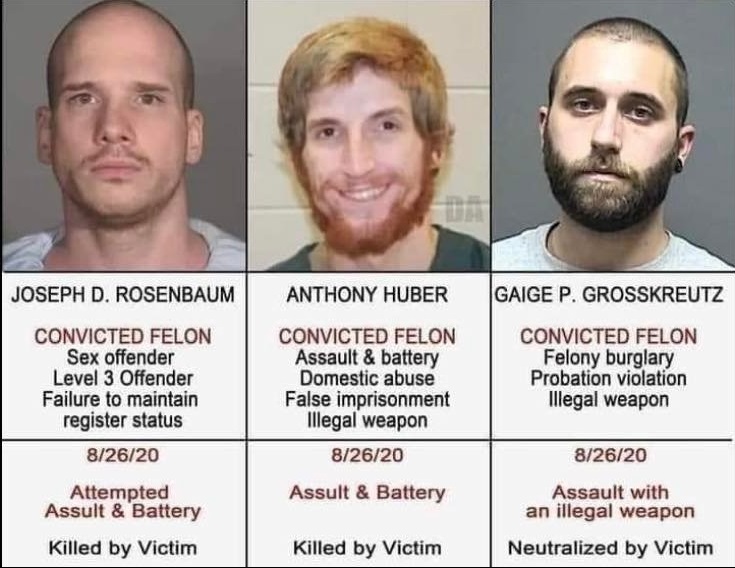 There is more, but you get the picture, Unlike Alec Baldwin’s script supervisor, these men were not innocent victims. They were malicious pursuers with ill intent.

Now we hear that a lawsuit has been filed by script supervisor Mamie Mitchell, represented by lawyer Gloria Allred,  claiming that Alec Baldwin was careless and reckless with a firearm to a point beyond belief, actually engaging in a game of Russian roulette with it:

Rust script supervisor Mamie Mitchell, the first person to call 911 after Halyna Hutchins was accidentally shot by Alec Baldwin on the film’s set last month, broke down in tears today as she announced she is filing a lawsuit against Alec Baldwin and other producers of the low-budget Western movie…

Mitchell was standing close to the Director of Photography, Halyna Hutchins, when the bullet fired from Baldwin’s gun killed her and then injured the director Joel Souza.

The suit claims assault, intentional infliction of emotional distress, and deliberate infliction of harm. It also states that the scene being shot did not require a gun to be fired…

‘I relive the shooting and sound of the explosion from the gun over and over again,’ Mitchell – a 40-year industry veteran – said, in tears recalling her memory of the incident.

‘Alec Baldwin intentionally, without just cause or excuse, cocked and fired the loaded gun even though the upcoming scene to be filmed did not call for the cocking and firing of the firearm,’ Allred said. ‘Mr. Baldwin chose to play Russian Roulette with a loaded gun without checking it and without having the armorer do so.’

So why was Kyle Rittenhouse put on trial and Alec Baldwin still roams free? Gun control hypocrite Baldwin was playing deadly and reckless games. Rittenhouse was seeking to help and protect a community under a violent siege, a community abandoned by the “defund the police” loons who defend the BLM/Antifa riots that have left dozens dead nationwide in their wake, along with billions in property damage and destroyed livelihoods in largely minority communities.

Justice should be blind, not brain dead.