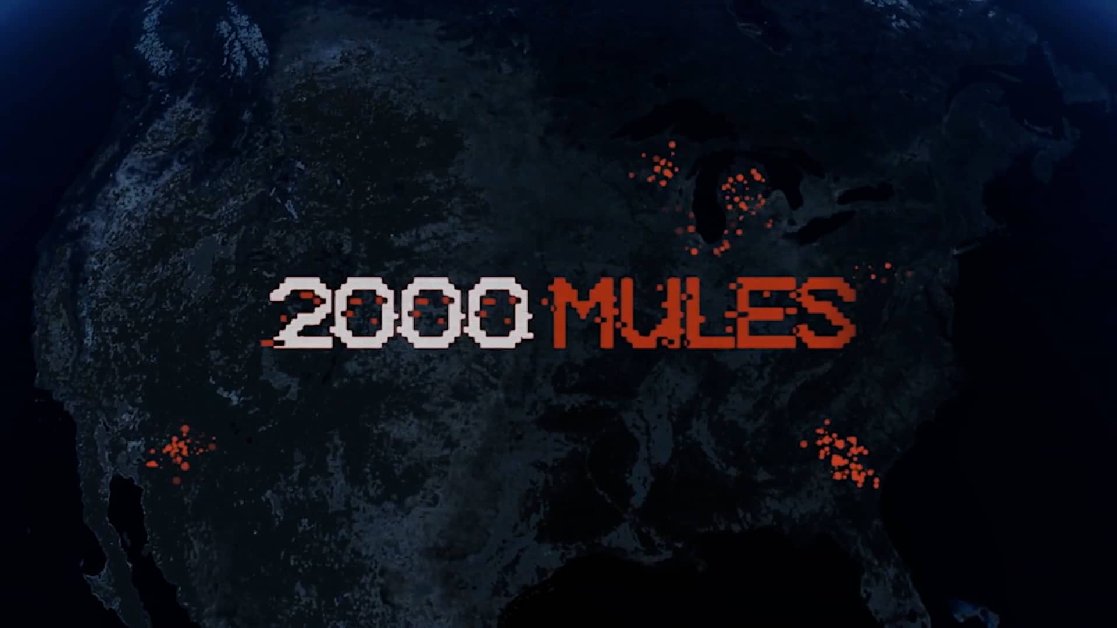 Election integrity and freedom of speech are the two most basic requirements for a democracy, a government by the people, exercised directly or through elected representatives. The 2020 United States presidential election breached them both. Unprecedented in US election history, Democrat-run cities in battleground states suspended vote counting, and then mysteriously resumed with drastically changed trajectories of the vote count. Americans went to sleep certain that President Donald Trump had been reelected. When they woke up, Joe Biden had mysteriously surged ahead to “win” the election. Americans remain shocked, confused, and angry. What happened??

Investigative journalist Dinesh D’Souza answers that question with irrefutable proof the election was stolen from we the people in his stunning new documentary film 2000 Mules. The film’s summary:

Drawing on research provided by the election integrity group True the Vote, 2000 Mules offers two types of evidence: geotracking and video. The geotracking evidence, based on a database of 10 trillion cell phone pings, exposes an elaborate network of paid professional operatives called mules delivering fraudulent and illegal votes to mail-in drop boxes in the five key states where the election was decided. Video evidence, obtained from official surveillance cameras installed by the states themselves, confirms the geotracking evidence.

THE FIX WAS IN

The 2020 presidential election was rife with fraud orchestrated by the Democratic Party. That’s not just an accusation; it’s now, thanks to bestselling author and investigative journalist Dinesh D’Souza, an established fact. With eyewitness testimony and the pinpoint precision and analytic sophistication of the forensic technique of geotracking, D’Souza demonstrates how an already corrupt system put in place by Democratic Party hacks and “community organizers” was taken over and supercharged by national-level operatives to produce massive voter fraud.

The key figure: the mule. A paid cut-out. A criminal deliveryman. The stooge found at the intersection where election cheating and double-dealing hit the road. The mule is the crook who physically takes a sack of ballots provided by shady NGOs and political machines—the “community activist organizations” made famous by former President Obama, for instance—and, like some nefarious Johnny Appleseed, dumps those ballots in collection boxes throughout a voting district. Do enough of this, and you have planted voter fraud across a nation.

Documentary filmmaker extraordinaire and bestselling author of America, Death of a Nation, and United States of Socialism, Dinesh D’Souza exposes powerful evidence of the colossal voting racketeering that you were told didn’t exist. Here you will find the receipts—the transcripts and confirmatory details—for the facts establishing 2020 election fraud presented in D’Souza’s major motion picture documentary, 2000 Mules. D’Souza makes a powerful argument that 2020 was a stolen election. More important, D’Souza proves it.

Geotracking identifies a person’s current physical location by obtaining GPS data from their smartphones or other GPS-enabled devices. The video evidence in the film documents hooded, masked, mules stuffing ballot drop boxes in the middle of the night. The GPS pings follow the mules from NGO [non-governmental organization] locations to dropbox locations, often multiple times in a single night. It is horrifying.

NGOs are typically voluntary groups or organizations, non-profit entities with a social mission like “election integrity” and “get out the vote.” Unsurprisingly, the NGOs identified by geotracking are Soros-backed entities, many receiving lavish 2020 election funding from Mark Zuckerberg. Democrats exploited the Covid pandemic to justify the massive mail-in voting required to implement their massive voter fraud scheme to steal the election.

Individuals who questioned the election outcome were smeared, deplatformed, and ridiculed. The mainstream media echo chamber insisted the 2020 presidential election was the freest and fairest election in US history. Over and over, day after day, the same election lie was repeated constantly by the media outlets.

Yet, Americans were not convinced. More and more evidence began to surface confirming their suspicions that the election had been manipulated. A protest was organized for January 6, 2021, on Capitol Hill to peacefully and legally protest Congressional certification of Joe Biden’s electoral vote win. Democrats responded with phase two of the 2020 election steal. When the protestors reached the Capitol Building, the 20,000-pound doors that only open from inside, were opened to let the protestors in—and the protestors poured in.

Challenges to the certification are heard in alphabetical order. Paul Gozar, a Republican representative from Arizona was the first to object. Objections must be co-signed by a senator. Texas Senator Ted Cruz had signed the objection. Suddenly there was chaos in the House chamber, people were scrambling for cover because of the announcement that the Capitol had been breached–how very convenient. The Democrat political theater that ensued was Oscar-worth. Investigations that clearly showed Capitol police removing barricades, and videos identifying FBI operatives were ignored. Instead, drama queen Nancy Pelosi began shrieking that the breach was a Trump-inspired insurrection, and protestors should be arrested for domestic terrorism.

Never in the history of the United States have lawful protestors been arrested and held as political prisoners without due process, until January 6th. Phase three of the Democrat election steal required incarcerating Trump supporters as domestic terrorists. Incarcerated for months on end without being charged with a crime, many are locked in their cells with no human contact for 23 hours a day, without legal representation, adequate food, water, or medical attention.

Jan 6 protesters being held in indefinite pre-trial detention in DC for as little as “trespassing” into the Capitol building have reportedly been placed on lockdown in retaliation for a Fox News show on Sunday where Mark Levin, Julie Kelly, and Senator Ron Johnson exposed how they’re being tortured, beaten, racially abused and locked in solitary confinement.…

As I reported last week, peaceful Jan 6 Capitol protester Paul Allard Hodgkins was maliciously overcharged by the feds with “obstructing an official proceeding of Congress” and faced 20 years in prison for the crime of taking a selfie on the Senate floor with others as they “cheered and said prayers.”

Not only was the US 2020 election itself as corrupt as any in a third world nation, the aftermath continues to be equally squalid. But there’s more. The Democrats found it necessary to empower themselves to be the arbiters of free speech, hate speech, and disinformation.

The fourth phase of the 2020 election steal required the institutional elimination of free speech in the name of national security. The illegitimate Biden regime has just created an Orwellian Ministry of Truth. Biden’s Disinformation Governance Board, under the authority of the Department of Homeland Security, will have the authority to determine what is and what is not hate speech and/or disinformation. This means that anyone still questioning the 2020 election can be legally labeled a domestic terrorist and subject to punishment as a domestic terrorist.

In the closing line of my latest book, The Collapsing American Family: From Bonding to Bondage I write, “Space is no longer the final frontier–reality is.” The deceitful Democrats have decided that they will define reality for you. Don’t let them.

One thought on “Election Whores of the Democrat Party”