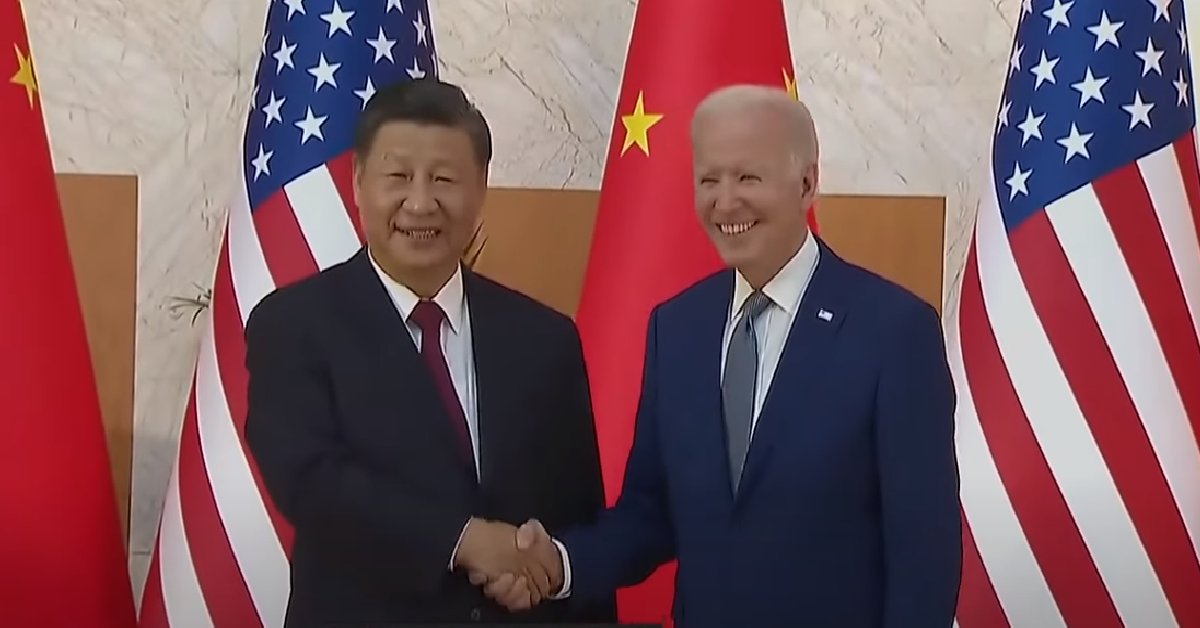 If you scan the official “readout” of China Joe’s G20 discussions with his boss, Red Chinese dictator Xi, you will begin to understand why the Communist Party of China is now ruling the world. We knew China Joe was subservient to Xi before the meeting but the official summary of what they talked about confirms that this is now “official” policy for everyone to see.

To make matters worse, there is no embarrassment over this. Indeed, China Joe has dispatched his flunkie, Secretary of State Blinken, to go to Beijing to beg for more high-level meetings, so China Joe can continue his groveling.

China Joe is continuing to fulfill the instructions of his not-so-secret boss, Barack Hussein Obama, who went to Beijing after his two terms in a meeting the Chinese press called a discussion among “veteran cadre,” a euphemism for communist operatives.

The official “Readout of President Joe Biden’s Meeting with President Xi Jinping of the People’s Republic of China” is a sad commentary on America’s inferior place in the world. China Joe didn’t even mention the China virus suffering and death unleashed on the world.

The Reuters story about the meeting was, “Biden and Xi clash over Taiwan in Bali but Cold War fears cool.”

So don’t worry: despite more than one million dead Americans, the China virus brouhaha won’t be a future factor. Let’s just put this behind us. Let’s bury the dead and move on.

One might be tempted to blame this on Hunter Biden’s financial shenanigans and kickbacks to the “Big Guy.” Money plays a role. But so does ideology. China Joe didn’t get the nickname China Joe for nothing. He functions as a foreign agent for the Red Chinese regime. It’s time to recognize this fact and NOT move on.

So when possible new House Speaker Kevin McCarthy says he wants to investigate the origin of COVID-19, let’s recognize this ploy for what it is – another failure to deal with communism and its spawn. “The Communist Party of China hid the seriousness of the disease, led a propaganda campaign blaming the U.S., used their supplies to exert influence, and continue to refuse international experts to investigate what happened,” McCarthy points out. What more is there left to investigate?  These endless investigations are just another excuse to do nothing.

In the preamble of his “Commitment to America,” McCarthy says, “As Americans, we cherish our rights to life, liberty, and the pursuit of happiness.”

What about the right to life of the more than one million Americans dead from the China virus?

The promise of another investigation is a way to avoid recognizing that China declared war on America and wiped out many of our most vulnerable citizens.

We have a national government that will not protect our country from a foreign invasion, as we see on the southern border, and an attack in the form of a dangerous virus. Under these circumstances, don’t we have a right to alter or abolish this government?

One might say the invasion is also the result of China Joe doing China’s bidding, since fentanyl is flowing north along with the mules who carry it.

Say what you like about Trump, the fact remains that China hated him, too. He acted early to combat the China virus and put tariffs on Chinese goods.  He brought kingpin designations against drug traffickers operating in China, India, and Mexico.

In his announcement of a 2024 campaign, he went further, calling for the death penalty for drug traffickers.

This is an interesting proposal, since the drug traffickers have positions in the Congress of the United States, such as Rep. Jamie Raskin (D-MD), who says that “cannabis must be decriminalized at the federal level as a matter of basic justice in the country.”

Drug trafficking has become official government policy in many states, and Raskin wants it to be official government policy at the federal level. Incredibly, ranking Republican member of the House Oversight Subcommittee on Civil Rights and Civil Liberties Rep. Nancy Mace (R-SC) also supports legalization. They held a hearing with pro-dope advocates.

House Democrats and Republicans co-published a joint memo making the case for legalization.

The Chinese couldn’t be happier. As they exert more and more control over the United States, there is a bipartisan push to push more dope on Americans, to make them even dopier than they are now. That’s just what we need – Americans getting high, unable and unwilling to do the serious critical thinking we need to save America.

There are some who blame the election results on vote fraud. I say it’s mostly because of the dopes in the population who are now smoking dope and have lost awareness of what freedom really means. They are herded to the polls or else their votes are harvested. These are the people who think abortion is health care. They think “democracy” is one-party rule. It’s what motivated them to vote Democrat. It’s why America is coming to resemble China more every day.

And that is no accident.