Why Did U.S. President Barack Obama order a military attack on Libya?  Why did he seek the permission of the United Nations Security Council, but not that of the U.S. Congress – as he is constitutionally obliged to do?

According to Radio Free Europe

Those who justify the Libyan intervention on humanitarian grounds draw much of their logic from a concept which has dramatically gained ground over recent decades. The concept is known as “R2P,” shorthand for the world’s “Responsibility to Protect” civilians.

But what does this catchy little phrase mean? Where did it come from? What are its implications?

The United Nations reported in July 2009;

The Obama administration is supporting moves to implement a U.N. doctrine calling for collective military action to halt genocide. In a week-long debate on implementing the Responsibility to Protect Doctrine, the U.S. joined a majority of U.N. countries, including Russia and China, in supporting implementation of the policy. The doctrine itself was approved in 2005 by more than 150 states including the U.S.

The doctrine specifies that diplomatic options such as internal conflict resolution, sanctions and prosecution by the International Criminal Court, should be used first. If they don’t work, then a multi-national force approved by the Security Council would be deployed.

In other words, if the United Nations does not approve of a certain government’s behavior, and that government’s leaders  will not respond to sanctions and the threat of prosecution, they will be attacked militarily.

The doctrine of the responsibility to protect was first elaborated in 2001 by a group of prominent international human rights leaders comprising the International Commission on Intervention and State Sovereignty. Under their mandate, the Commission sought to undertake the two-fold challenge of reconciling the international community’s responsibility to address massive violations of humanitarian norms and ensuring respect for the sovereign rights of nation states.

Led by Gareth Evans, former Foreign Minister of Australia, and Mohamed Sahnoun, Special Advisor to the UN Secretary-General, the Commission issued its report in December 2001. Focusing on the “right of humanitarian intervention,” this report examined when, if ever, it is appropriate for states to take coercive – and in particular military – action, against another state for the purpose of protecting populations at risk. In essence, the group concluded that when a group (or groups) of people is suffering from egregious acts of violence resulting from internal war, insurgency, repression or state failure, and the state where these crimes are taking place is unable or unwilling to act to prevent or protect its peoples, the international community has a moral duty to intervene to avert or halt these atrocities from occurring.

The “responsibility to protect” doctrine received renewed emphasis in 2004 when the United Nations Secretary-General Kofi Annan created the High-Level Panel on Threats, Challenges and Change. The Panel was established to “identify major threats facing the international community in the broad field of peace and security and to generate new ideas about policies and institutions aimed at preventing or confronting these challenges.”

With respect to “Responsibility to Protect,” the Panel endorsed this “emerging norm,” stating that:

There is a growing recognition that the issue is not the “right to intervene” of any State, but the “responsibility to protect”  of every State when it comes to people suffering from avoidable catastrophe mass murder and rape, ethnic cleansing by forcible expulsion and terror, and deliberate starvation and exposure to disease. And there is a growing acceptance that while sovereign Governments have the primary responsibility to protect their own citizens from such catastrophes, when they are unable or unwilling to do so that responsibility should be taken up by the wider international community… ”

We endorse the emerging norm that there is a collective international responsibility to protect, exercisable by the Security Council authorizing military intervention as a last resort, in the event of genocide and other large scale killing, ethnic cleansing or serious violations of international humanitarian law which sovereign Governments have proved powerless or unwilling to prevent.”

In September 2005, “Responsibility to Protect” “was once again enlivened,” this time with the “full support of the international community.” At the 60th session of the U.N. General Assembly gathering, 191 heads of state and government representatives unanimously endorsed a resolution supporting the Responsibility to Protect doctrine. This resolution laid the foundations for a new global moral compact between every State and every population on earth. As adopted, atrocity crimes “genocide, crimes against humanity (including ethnic cleansing) and war crimes” – were considered a universal concern and therefore were responsibility of the international community.

Each and individual State has the responsibility to protect its populations from genocide, war crimes, ethnic cleansing and crimes against humanity. This responsibility entails the prevention of such crimes, including their incitement, through appropriate and necessary means. We accept that responsibility and will act in accordance with it. The international community should, as appropriate, encourage and help States to exercise this responsibility and support the United Nations in establishing an early warning capability.

The support of the U.S. was of course crucial for this radical new approach to international relations. The U.S. under President George Bush would not even sign up to the International Criminal Court, a key component of the proposed new order.

Responsibility to Protect knew they would get nowhere under Bush,  but viewed the 2008 elections as an opportunity for change.

The upcoming 2008 presidential election and the general debate that will precede provide an opportunity to bring this new norm in the public and leaders’ discourse over America’s domestic and foreign policy, and to get our nation to take the necessary bold steps that are called for to implement this bold principle.

Clearly, the Obama Administration has proven far more sympathetic to Responsibility to Protect’s agenda than was that of President Bush.

While few seem to realize  the significance of the new doctrine, Responsibility to Protect convener Richard H. Cooper fully understands its transformational potential.

Yet as I write, a quiet revolution is under way. In September 2005, the United Nations General Assembly adopted a declaration – the World Summit Outcome – whereby each and every State in the world accepted its responsibility to protect populations from genocide, crimes against humanity, ethnic cleansing and war crimes. The declaration also emphasizes that if a State relinquishes its responsibility to protect – whether by will or lack of capacity – this responsibility must be borne by the international community that can decide to intervene as a last resort. In the face of mass atrocities, every nation and thus every people on earth have pledged to be our brothers’ keepers. Without fanfare and with little notice, the obsolete principles underlying the Westphalian ordering of world affairs have been dramatically rewritten. We can no longer hide behind State sovereignty, a 400-years old shield, to excuse the shameful reflex and ongoing practice of remaining passive in the face of the most outrageous behaviors…

“We can no longer hide behind state sovereignty.”

Let that sink in  reader. That is what this is all about. 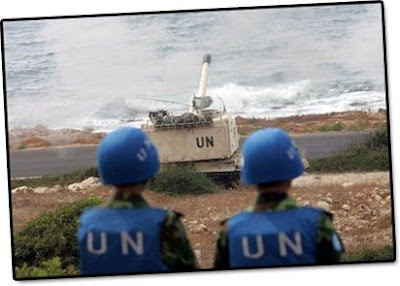 “Responsibility to Protect” means the  end of national sovereignty.  It mandates the surrender of any nation state’s legal authority over their own citizenry and armed forces to a supra-national body, with the power to sanction or destroy any deemed “rogue” nation – does Israel spring  to mind?

“Responsibility to Protect” – three little words, that should strike terror into the heart of every patriot in every free nation of the world.

10 thoughts on ““Responsibility to Protect” – The End of National Sovereignty As We Know It?”