By: Terresa Monroe-Hamilton
** A special thanks to Kadie Hicks whose research added significantly to this article.
Hat Tip: Nancy Jacques 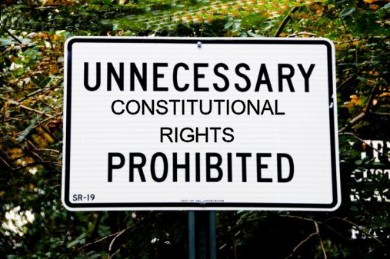 Each day, Obama‘s administration, Eric Holder, DHS and the courts are getting more and more brazen in their trashing of the Constitution. They no longer hide it. They are out in the open, shoving it down our throats, daring us to fight back. Since they know that changing our founding documents is not realistic, they are going around them via judicial activism and executive orders. Soon, a moment will come where they can do as they please and suspend our rights altogether. That moment is not far off I fear.

A blow to our Constitutional liberties occurred last week. At first, I could not believe what I was reading. Sadly, this did occur and our founding fathers must be weeping for our nation. The Indiana Supreme Court ruled in a 3-2 decision that citizens don’t have a right to resist unlawful entry into their homes by police. It means that officers may enter any residence without warrant, probable cause or permission of the owner, leaving citizens’ only legal recourse against such intrusions in the hands of police review boards or district courts.

Overturning a common law dating back to the English Magna Carta of 1215, the Indiana Supreme Court ruled Thursday that Hoosiers have no right to resist unlawful police entry into their homes.

In a 3-2 decision, Justice Steven David writing for the court said if a police officer wants to enter a home for any reason or no reason at all, a homeowner cannot do anything to block the officer’s entry.

“We believe … a right to resist an unlawful police entry into a home is against public policy and is incompatible with modern Fourth Amendment jurisprudence,” David said. “We also find that allowing resistance unnecessarily escalates the level of violence and therefore the risk of injuries to all parties involved without preventing the arrest.”

David said a person arrested following an unlawful entry by police still can be released on bail and has plenty of opportunities to protest the illegal entry through the court system.

So, now a policeman can just enter your home for any reason or no reason at all and you cannot protest it? Legality be damned, you must submit? You are kidding right? And if you just happened to be shot by the officer who just committed an unlawful entry, no one can hold the officer liable I presume. You’ll still be dead of course. Oopsie… Or how about this: the ruling creates a reasonable expectation on the part of false flag home invaders that they will not receive resistance when they assert they are the police. Feel safer now?

Incompatible with modern Fourth Amendment jurisprudence? Excuse me, but the Constitution is not a “living, breathing document.” It says what it means and means what it says, just as the founding fathers intended – period. No judge or other person of authority has the right to interpret the Constitution in light of what they consider to be “modern” jurisprudence. And telling the victim of the illegal entry that they have plenty of opportunities to protest said illegal entry in the court system is not only arrogant and asinine, it borders on the judicial form of ‘let them eat cake.’

This not only is judicial activism at its horrific worst, it sets a really evil precedent for other states. Let’s look at the Fourth Amendment, shall we:

Seems pretty clear to me. But no, this ruling was done in the name of ‘preventing violence’ which is truly a lame justification if I ever heard one, unless of course you are a progressive liberal who would trade their parking space for security. In which case I’m sure they are cheering over this monstrous decision as our individual freedoms are crushed and torn asunder by those who we have trusted to lead and protect us.

From Hot Air, you can see that the dissenting justices almost got it right – almost:

Justice Robert Rucker, a Gary native, and Justice Brent Dickson, a Hobart native, dissented from the ruling, saying the court’s decision runs afoul of the Fourth Amendment of the U.S. Constitution.

“In my view the majority sweeps with far too broad a brush by essentially telling Indiana citizens that government agents may now enter their homes illegally — that is, without the necessity of a warrant, consent or exigent circumstances,” Rucker said. “I disagree.”

Rucker and Dickson suggested if the court had limited its permission for police entry to domestic violence situations they would have supported the ruling.

But Dickson said, “The wholesale abrogation of the historic right of a person to reasonably resist unlawful police entry into his dwelling is unwarranted and unnecessarily broad.”

I agree with Bruce McQuain of Hot Air, that the justices got it ‘mostly’ right because they said they would have agreed if the ruling were limited to domestic violence. You can’t pick and choose ‘exigent circumstances’ when it comes to the Constitution. But, any excuse these days it seems will do to throw the Constitution under the Marxist bus.

For those of you who quite reasonably would say, “Oh, but they wouldn’t really do that,” an Indiana sheriff has now said that if they (the police) need to do random door to door searches, they will. How very fascist of him. From Mike Church:

According to Newton County Sheriff, Don Hartman Sr., random house to house searches are now possible and could be helpful following the Barnes v. STATE of INDIANA Supreme Court ruling issued on May 12th, 2011. When asked three separate times due to the astounding callousness as it relates to trampling the inherent natural rights of Americans, he emphatically indicated that he would use random house to house checks, adding he felt people will welcome random searches if it means capturing a criminal.

Well, actually no… It would appear people do not welcome this thuggish and brutish form of law enforcement:

The Indiana Supreme Court has received numerous threats via telephone and email following a controversial decision handed down last Thursday, May 12th, 2011, that “authorizes” police to search homes randomly according to Indiana Supreme Court Spokeswoman, Kathryn Dolan. In a 3-2 ruling in BARNES vs. STATE of INDIANA, Justice Steven David, appointed by Governor Mitch Daniels wrote that under “modern” (post-PATRIOT-Act) jurisprudence, Hoosiers must submit to the violent force of any and all UNLAWFUL searches instigated by law enforcement. The court justifies such intrusion due to individuals having better access to courts, than at the elevation of the right to common-law.

I wonder if any of those ‘threats’ included the judicious use of tar and feathers? Hmmmm… You might also ask yourself who was the person behind this judicial drama? As you can read earlier in this post, it is a man by the name of Steven H. David who authored the majority opinion. And guess what? Mitch Daniels appointed him. That’s right – the newest darling of the Republican Party for the 2012 Presidential bid. Daniels should exit stage left and I do mean left.

This is an epic fail by the Indiana Supreme Court. They cannot legally deny you your Constitutional rights. Not only does this ruling nullify the Fourth Amendment in Indiana, it does not make anyone safer. In effect, it gives the green light to officers to shoot first and ask questions later. This ruling needs to be overturned immediately and it needs to be banished to the progressive dust heap of history where it belongs. If this evil precedent spreads, the Republic will cease to exist and the home of the free will become a suppressive police state with tyrants at the helm.

Police Can Now Knock On Your Door, Listen for Sounds Suggesting Evidence Is Being Destroyed and Then Break In