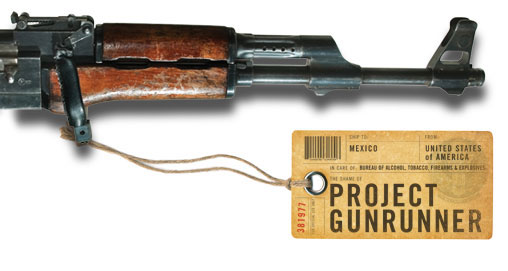 While clear-thinking Americans can agree that Obama and Holder’s Justice Department made a fatal error in instituting “Operation Fast and Furious,” whereby thousands of weapons were knowingly placed in the hands of straw buyers who illegally crossed our southern border, few are asking why such a dangerous program was created.

There was a definite agenda and we need to go back to 2009, shortly after Obama was sworn in as President, to understand its origin.

At the start of the Obama regime, Obama and Hillary Clinton publicized that 90% of the guns used in crimes committed in Mexico came from the U.S. By April of 2009, FOX News had investigated this assertion and proved it was false. Only 17% – not 90% – of the weapons confiscated in Mexico were U.S. weapons.

Mainstream media did not report that Obama and Clinton’s claims were false and, instead, perpetuated the lie and the Obama administration moved forward with Operation Fast and Furious to make the lie a reality. To date, Obama has not been held to account for the false information he and his administration thrust forward for public consumption in 2009 and by the end of this article, you will see how this fits into a larger agenda with a purposeful outcome.

The Obama administration instituted their “bottom up” program – Fast and Furious. Their plan, aptly named, was designed to quickly and deliberately put as many U.S. weapons as possible into the hands of straw buyers who would bring them across the border into Mexico and into the hands of the drug cartels. This would ensure that when those weapons were retrieved and counted by Mexico’s law enforcement units, the numbers would then show a larger percentage of weapons coming from the U.S.

Congressman Darrell Issa (R-CA) has held congressional hearings on Fast and Furious and released redacted emails which described the following (emphasis added), as reported by Jordy Yager at The Hill:

“In one of the emails, released by Rep. Darrell Issa (R-Calif.), with the subject heading “Director’s questions,” the supervisor of the “Fast and Furious” operation wrote to the assistant special agent in charge of Phoenix field operations with an Internet Protocol address for one of the video monitoring units in a gun store which was authorized to sell guns to the suspects.

The emails seem to indicate that ATF acting director Kenneth Melson had asked for this information. “With this information, acting Director Melson was able to sit at his desk in Washington and – himself – watch a live feed of the straw buyers entering the gun stores to purchase dozens of AK-47 variants,” said a Republican committee statement…

In another email dated March 10, 2010, the assistant special agent in charge of the Phoenix field operations wrote to the supervisor of the “Fast and Furious” operation and said, “Not sure if you know, but Mr. Melson and Mr. Hoover are being briefed weekly on this investigation and the recent success with [redacted] so they are both keenly interested in case updates.”

Prior to release of the emails, ATF’s letters to legislators denied that they were selling these weapons to straw buyers and in fact they “made every effort to prevent weapons from ending up in Mexico.”

However, the truth is documented (emphasis added) by Dave Workman at The Examiner, who has been reporting on this story for over four months since David Codrea (National Gun Rights Examiner) and Mike Vanderboegh (independent blogger) first uncovered the program:

“Operation Fast and Furious was an off-shoot of the larger Project Gunrunner, conducted by the Bureau of Alcohol, Tobacco, Firearms and Explosives. This controversial operation allowed an estimated 2,000-2,500 guns to “walk” into Mexico as ATF field agents were repeatedly ordered to “stand down” by their supervisors.”

“ATF agents have shared chilling accounts of being ordered to stand down as criminals in Arizona walked away with guns headed for Mexican drug cartels. With the clinical precision of a lab experiment, the Justice Department kept records of weapons they let walk and the crime scenes where they next appeared. To agents’ shock, preventing loss of life was not the primary concern.” — Congressman Darrell Issa

“The Issa/Grassley report, The Department of Justice’s Operation Fast and Furious: Accounts of ATF Agents, contains some chilling revelations:

Highlights of the report include:

Quick re-cap – Obama, Clinton and Holder deliberately instituted Operation Fast and Furious for the sole purpose of increasing the number of U.S. weapons that “walked” into Mexico. Remember some of the facts:

Why did Obama, Clinton and Holder do this? It’s obvious to even the most casual observer; they did this to further the propaganda they pushed in early 2009 – that the U.S. has a gun problem because “90%” of the confiscated weapons in Mexico are coming from the U.S. – in order to justify more aggressive restrictions on gun ownership in the U.S.

Keep in mind that when the operation was created in 2009, the Obama administration had not anticipated that it would be exposed. The Democrats had a majority in both the House and Senate and any investigation would have had to have been brought forward by their own party – which Obama, Clinton and Holder knew would not happen. But there were several things they didn’t anticipate:

Marxists will always tell you that the ends justify the means. Creating the very problem they can claim they’re prepared to solve isn’t a new tactic for Progressives, but this is only part of the story.

Congressman Issa will fail the American people if he stops short and fails to investigate and determine the true purpose of Operation Fast and Furious. To say that it was a dumb program and needs to stop will miss the true agenda behind the creation of the operation in the first place.

While the “bottom up” Operation Fast and Furious continued, so too has Obama’s “top down” operation – the United Nations (UN) Small Arms Treaty.

Did you know that the UN has an Office for Disarmament Affairs? Did you know the Obama administration has been working closely with the UN and firmly supports the UN Small Arms Treaty, which Obama and Clinton fully intend to thrust upon America?

As I reported on April 18, 2011 in the article “THE GLOBALISTS’ TAKEOVER OF AMERICA: Part 3 – WEAKEN MILITARY & CIVILIAN DEFENSE”…

“In addition, the globalists (including Obama and Hillary Clinton) intend to enact the Small Arms Treaty which will restrict gun ownership for American citizens under the UN Office for Disarmament Affairs. Harm our soldiers and disarm our citizens and America is ripe for attack and invasion on our own soil. Couple the Small Arms Treaty with the President’s Executive Order granting international police (INTERPOL) full immunity on American soil, along with the National Civilian Security Force that Obama has been creating, and the clear and present danger to America is obvious.

If the Obama administration’s agenda isn’t yet clear, despite the facts from emails, testimony, investigations, reports and the links in this article, add the fact that during the Operation Fast and Furious hearings, Mike Lillis at The Hill reported what ensued when ATF Special Agent, Peter Forcelli, stated the following (emphasis added):

“I think perhaps a mandatory minimum one-year sentence might deter an individual from buying a gun,” Forcelli said.

Maloney defended her line of questioning, saying she was “trying to figure out why … prosecutors often decline these gun cases.”

Then Paul Helmke, President of the Brady Campaign to Prevent Gun Violence, reinforced the fact that it’s really about gun control when he said in a statement on Wednesday:

“It’s also critically important that we examine why our gun laws are so weak that they make trafficking so easy in the first place.”

No mention was made by the Democrat representatives or by Paul Helmke that the Obama administration is aiding and abetting the transfer of U.S. weapons into Mexico via a program they designed, implemented and oversaw – complete with “acting Director Melson who was able to sit at his desk in Washington and – himself – watch a live feed of the straw buyers entering the gun stores to purchase dozens of AK-47 variants,” and “ATF field agents were repeatedly ordered to “stand down” by their supervisors.”

The agenda behind Operation Fast and Furious is only one piece of a larger operation to diminish and ultimately extinguish the 2nd Amendment rights of law-abiding Americans. The 2nd Amendment, as ratified by the States, reads:

A well regulated militia being necessary to the security of a free State, the right of the People to keep and bear arms shall not be infringed.