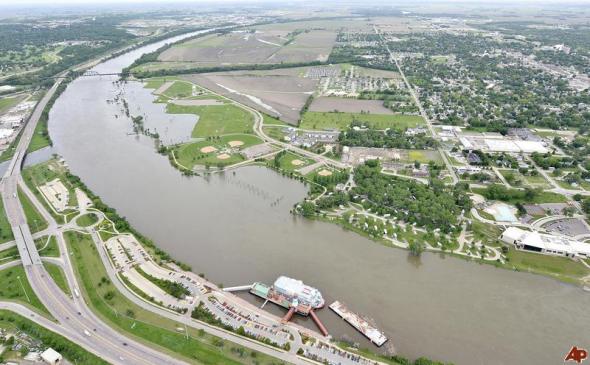 Two HUGE intel leads in my email box this morning from way-back contacts that I’ve had for years, that are actually somewhat connected concepts.

1. File this one under “Now It All Makes Sense”. A Missouri farming and ranching contact just got off a conference call wherein he was informed that the federal government is sending out letters to all of the flooded out farmers in the Missouri River flood plain and bottoms notifying them that the Army Corps of Engineers will offer to BUY THEIR LAND.

Intentionally flood massive acreage of highly productive farmground. Destroy people’s communities and homes. Catch them while they are desperate and afraid and then swoop in and buy the ground cheap. Those evil sons of bitches.

2. Speaking of evil sons of bitches, George Soros appears to be “investing” in farmground through the same puppet company that he used to get into the grain elevator and fertilizer business. The company is called Ospraie Capital Management and is buying up farmground in a joint venture with Teays River Investments as a partner. Here is that announcement:

Okay. Here’s the connection. This Ospraie outfit was a hedge fund specializing in commodities that was started and run by some cocky child who didn’t know how to trade bear markets and got his butt kicked into next week in the grain market of 2008. He also lost a fortune trying to trade RARE EARTH METALS. In fact, it was so bad that he had to shut his fund down because he had promised his investors that he would give them all of their investment money back if the fund lost more than 30% in one year. Whoopsie.

But it appears that Soros swooped in and saved the day because this Ospraie is the “co-investor” with Soros that bought the remnants of ConAgra’s trading operation and renamed it… Gavilon. In the industry, it is widely acknowledged that Ospraie IS Soros. That three-page article citation is here, copy and paste the URL into your address bar:

Bottom line: Soros, through Ospraie, is buying up farmground. Please also note that the hotlink citation above is dated June 26, 2009. My contact says this has been going on for two years – and also remember what I told you about farmground prices inflating wildly, especially in Illinois. I have personally confirmed farmground in Illinois selling for $13,000 per acre within the last month, whereas that same kind of ground in Illinois was going for $5500 per acre the day Obama was inaugurated.

Two days ago, Ann posted the following on her website.

Missouri Basin Flooding: 100% Intentional
Posted by Ann Barnhardt – June 22, AD 2011 10:07 AM MST
The Army Corps of Engineers in collusion with Marxist-Environmentalists have engineered a flood scenario that will, is, and already has killed people and will result in property damage in the multi-multi billions of dollars. And it is all intentional.

Read “The Purposeful Flooding of America’s Heartland” HERE at AmericanThinker.com

The excuse is saving the wetland habitat of the blue-butted water auk or some taurusfimus like that.

1. I’ll say what no one else will about the Army Corps of Engineers: that’s where all the C- state school engineering students end up. Let that reality compound over 30-40 years and you would be FAR better off letting Terry down at the local machining shop or Ricky over t’ the diesel garage run the Missouri River dam system.

2. None of this is ever going to stop until We The People start arresting these people, trying them for treason, and then putting them in prison for the rest of their lives. This will never, ever stop unless there are massive, massive personal consequences for these people.