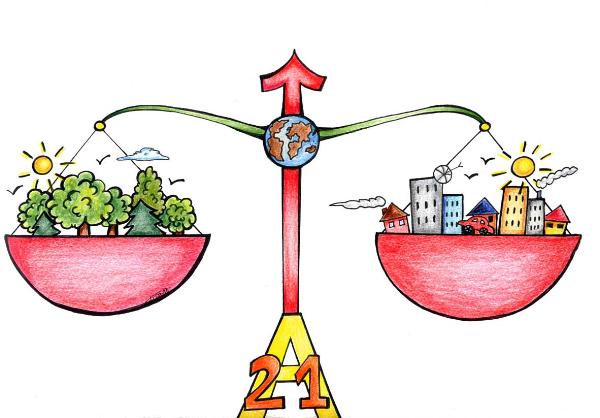 I didn’t even know about Agenda 21 until a couple of months ago. Did you know it has been around since 1992? It is quietly and stealthily being implemented throughout the United States and the world. And within its scope is contained some oldie but goody concerns that I have held for some time: confiscation of public lands by the government (the Wilderness Project), EPA over-regulation, population distribution and control and the list just keeps getting longer and scarier… Agenda 21 is a 40 chapter plan that lists a series of goals to be achieved globally. It is the global blueprint for changing the way we “live, eat, learn and communicate” because we must “save the earth.” Humans be damned.

Under Agenda 21, everything you can imagine would be heavily controlled by the government: water, electricity and transportation are just some of the areas of concentration that are targeted. This new way of living would usher in an uber-nanny state globally, the likes of which we have never dreamed of. Forget one-world government… Think one-world totalitarian regime.

So what exactly does Agenda 21 entail? It consists of 115 specific programs designed to facilitate, or to force, the transition to Sustainable Development. The objective, clearly enunciated by the leaders of the Earth Summit, is to bring about a change in the present system of independent nations. Agenda 21 is broken into 8 sections:

Think our government won’t practice and promote population control? Think again. Below is a map for your review. The red and yellow areas would be off-limits to humans under a fully implemented Agenda 21. Humans would be herded and corralled into the black areas where they would more easily be controlled. Stack em and pack em – the smart growth zones. How very 1984. Deliberate dystopia…

One can only deduce by looking at the above map, that the UN and our government expect a huge reduction in population in the United States to occur at some point. This has been planned for a long time and obviously, a majority of Americans are seen as ‘expendable.’ From End of The American Dream:

This agenda showed up again when the United Nations Population Fund released its annual State of the World Population Report for 2009 entitled “Facing a Changing World: Women, Population and Climate“.

The following are three quotes that were pulled right out of that document….

2) “No human is genuinely “carbon neutral,” especially when all greenhouse gases are figured into the equation. Therefore, everyone is part of the problem, so everyone must be part of the solution in some way.”

3) “Strong family planning programmes are in the interests of all countries for greenhouse-gas concerns as well as for broader welfare concerns.”

If no human is “carbon neutral”, then what is the solution?

To those that are obsessed with Agenda 21 and “sustainable development”, the fact that you and I are alive and breathing air is a huge problem.

Think this monstrously evil agenda isn’t progressing? Well, hold on to your hats, because Agenda 21 is moving ahead exponentially. On June 9th, 2011, President Obama signed his 86th executive order. From The Blaze:

Section One of 13575 states the following:

Section 1. Policy. Sixteen percent of the American population lives in rural counties. Strong, sustainable rural communities are essential to winning the future and ensuring American competitiveness in the years ahead. These communities supply our food, fiber, and energy, safeguard our natural resources, and are essential in the development of science and innovation. Though rural communities face numerous challenges, they also present enormous economic potential. The Federal Government has an important role to play in order to expand access to the capital necessary for economic growth, promote innovation, improve access to health care and education, and expand outdoor recreational activities on public lands.

“Sustainable Rural Communities” are code words for the UN plan for Sustainable Development known as Agenda 21. This executive order shows that the government is planning to take full control of food, fiber and energy. They also intend to fully control economic growth, health care and education. Also from The Blaze:

The new White House Rural Council will probably be populated by experts in the various fields that might prove helpful to the folks who live and work outside of large urban areas, right? Well, Tom Vilsack, the current Secretary of Agriculture, will chair the group, but let us review the list of members appointed to serve on this new council – according to the order, the heads of the following groups have been appointed:

It appears that not a single department in the federal government was excluded from the new White House Rural Council, and the wild card option in number 25 gives the president and the agriculture secretary the option to designate anyone to serve on this powerful council.

The United Nations has been peddling their Sustainable Development program for almost twenty years. The UN’s “social justice” blueprint – Agenda 21, requires governments to control almost all aspects of an individual’s life and is extraordinarily invasive and violates virtually every part of our Constitution. Americans are just now waking up to its presence and they are resisting more and more every day. The question is, will we resist enough to stop it from being ‘switched on?’ Obama is literally going around Congress and implementing this agenda regardless of how Americans feel about this fascist plan.

I don’t know about you, but I am not ready to live in a ‘green’ world that is ruled by a bureaucratic monster government that values the environment over mere human existence.

If the powers that be succeed in their implementation of Agenda 21, “Sustainable Development” and population control, how we live will change drastically over the next few years and not for the better. The collective believes resistance is futile.

Below is a video we posted some time ago. It was originally produced by the Forum for the Future, a major NGO funded by big corporations such as Time Warner and Royal Dutch Shell. In this video, the Forum for the Future presents their chilling version of the future. Are you ready to live in a “Planned-opolis?” Are you ready to use a “calorie card” and to have what you eat determined by a “global food council?” The brave new world that we will be forced to submit to (if the UN and the government get their way) is an alien idealistic version of hell on earth with a fascist tyranny that would make Mao quiver in ecstasy.

While this may seem almost comical, be assured that steps are being taken over the entire globe to implement this insanity. Huge strides are being made in accomplishing the various goals of Agenda 21. We are seeing it in light bulb restrictions, fuel and transportation advancements, energy meters, etc. We see it in the valuing of fish over humans in California where droughts are ravaging the farming communities. We see it in the choosing of the environment over farming where flooding is devastating other agricultural communities. If you open your eyes, you will see what is going on. Read about Agenda 21 and study it. It is the stuff of nightmares and all patriots should hear alarm bells ringing over this. The fascist stealth of Agenda 21 is upon us.

30 thoughts on “The Fascist Stealth of Agenda 21”