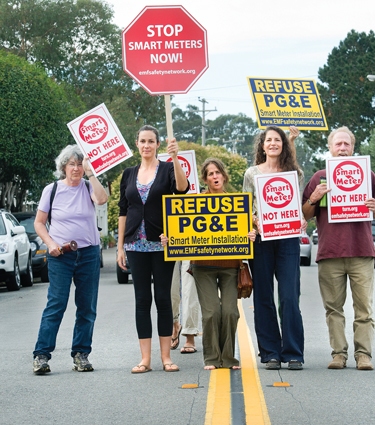 Coming soon to your home unless you stop them – and you may never even get a choice – the insidious Smart Meter and the end of privacy as we know it. People don’t want these Big Brother devices installed and watching/recording their every move. Things are about to get ‘real’ between the government/Agenda 21 pushers and We The People. And if a fight comes, my money is on the Tea Party – they are a scrappy bunch and freedom lovers to boot.

The dance has already begun in certain places around the nation. In Marin, California, residents are slugging it out with PG&E and the FCC, UCLA’s epidemiology department and the California Public Utilities Commission. Looks like the Nanny State spared no expense in the fight to control Americans and I do mean ‘control.’ From Marin Magazine:

“Smart” gas and electricity meters, so called because they use wireless signals to transmit up-to-the-minute usage data rather than requiring visits from meter readers, have been a source of controversy in California since PG&E began installing them in late 2009. Concerns about privacy and accuracy have created an upswell of opposition from Bakersfield to Santa Cruz, but perhaps none as forceful as that in Marin. Here, educated and experienced activists—many of whom have been fighting against cell phone towers and other sources of electromagnetic radiation for a decade or more—have made smart meters the latest cause célèbre. And their message, which hinges on both health and individual autonomy, is catching on. Cotati, Bolinas and Novato have joined Fairfax in opposing the meters, as have the Marin Association of Realtors and the county Board of Supervisors.

Yet PG&E doesn’t need permission from communities to install the meters. In fact, 100,000 of the 216,000 smart meters slated for Marin are already in place. Statewide, PG&E has installed nearly 8 million of 10 million meters planned and expects to wrap up the project by early 2012. Similar rollouts are happening nationwide, with PG&E leading the way.

So much for getting your permission. They are going to cram Agenda 21 and Smart Meters right down America’s throat whether they want it or not. But before you think these were conservatives objecting, look again. It was primarily liberals. I do believe that we have found a meeting place in the middle – both sides hate big, controlling government. Notice I did not use the word Progressive, as the very definition of Progressivism is a love for big government. And while the liberal residents in California are concerned for their bodily health, conservatives are concerned for their Constitutional health, rights and freedoms. Both want their privacy. Agenda 21 and Smart Meters are bad for either cause. Here is a great video that explains more about Smart Meters:

From The American Dream:

Jerry Day, an electronics and media expert from Burbank California, recently detailed many of the ways that smart meters act as surveillance devices when they are installed in our homes….

Saddle up boys and girls… Things are about to get very interesting in these United States of America. In a fascist sort of way that is.

Here we are at ‘opposites’ day again… In the name of reducing energy costs, the government wants to replace all meters with these creepy Smart Meters. The meters will cause energy bills to ‘necessarily skyrocket’ (wait, where have I heard that before?) and have a whole set of nifty nasty side effects such as failing systems and the opening of your personal information to hackers. The Feds are spending a ton of money on this conversion process and ask yourself, why is that? It’s obviously not to save money as the costs are astronomical. It’s also not to save the environment as it virtually does nothing to help it. But it does give government control over you – when and for how long to shut down your power, how much you have to pay for said power, usage monitoring, etc. This is all being done in part to catch the smallest of entrepreneurs who work from home to force them to get business licenses and submit to oversight by the government, with the added bennie of forcing many of them out of business. This is the Progressive groundwork to drastically raise the cost of energy, raise taxes and fees and to box Americans in, corralling them with judgments over their income, credit ratings, habits, etc. It’s a Marxist’s dream come true and the ultimate nightmare for freedom-loving Americans. How do you like Obama now America? Time for a do-over in 2012 – if we get that far.

Once installed, these meters will record a plethora of data concerning your personal lives and it will be stored in databases that you and I will never get access to. And the data could be wrong or flawed, but you will have little recourse to correct it. Literally life and death decisions will be made by our overlords using that data. Count on it. And unless you want to live entirely off the grid (and many are moving in that direction), you will submit. The data will be used by law enforcement and the government to ‘protect’ you. Do you really think your Constitutional rights will even figure into the equation down the road?

Welcome to a key element of Agenda 21. It is a plan by the UN not just for the US, but for the world. It will ‘fundamentally change‘ the entire planet into a Communist utopia if they get their way, ruled over by a select elite, who I guarantee, will not be subjected to the stringent rules and oversight that you and I will be.

When big business and government, along with politicians, combine to do what is best for the ‘American citizen,’ it can’t be good. GE has their grubby fingers in everyone else’s pie over this travesty. They will make money and gain exponential power doing so. For extra points class, what form of government is represented by the bonding of big business and political power?

“Fascism should more properly be called corporatism because it is the merger of state and corporate power.” – Benito Mussolini

In the end, the question is will we as Americans stand for this? I fervently hope not. Our government feels that they along with Agenda 21 are outsmarting America. Nothing could be further from the truth. Our salvation lies in figuring out how to stop this atrocity being foisted on us by those who seek the ultimate ‘change’ in America that goes along with total control of the populace. Agenda 21 and all its parts such as Smart Meters need to go immediately. Get involved locally and stop this everywhere you can. If Agenda 21 keeps growing roots, America will be subsumed into the Thing From The Green Lagoon, sucking us all down into an uber-fascist green ooze.

Power bills to soar by 30% in ‘green’ reforms

From The Radio Patriot: