This is day two of this short four day TPX touring event. Crew members had an 8 am call, organized the day’s events then boarded the motor coaches, which are now headed to Kenosha for 2:30 pm rally, then it’s on to Milwaukee for a 5:30 pm rally. They are well rested and ready to return to the battlefields of Wisconsin.

READER NOTE: I will post these early morning updates with some info from last night’s activities as a base info platform, then as tour embed Andrea Shea King reports in from the rally sites, I will update that info at the bottom. So check back as the day progresses.

Andrea has some thoughts on yesterday at her site – The Radio Patriot. Reports coming into this site from yesterday can be found there as well.

*Gov. Scott Walker faced a $3 Billion shortfall – after making budget decisions, together the Republicans and Gov were able to arrive at a balanced budget. Before Gov. Walker took office, Wisconsin had lost 150,000 jobs, placing Wisconsin as one of the worst in the nation.

*For the short time Gov. Walker has been in office, he’s created 40,000 jobs (private sector), putting Wisconsin up as one of the best in job creation. And Walker’s plan is still working as Wisconsin is creating new jobs each day – 9,000 in June alone!

*Take note of this: Push back by union organizers has nothing at all to do with budgetary decisions on the part of the Gov. and Republicans. If it did, logic would dictate that the unions would be foursquare behind Gov. Walker’s decisions as his policies are working and so too are the citizens of Wisconsin. Wisconsin voters can safely conclude that all union action against Gov. Walker and the Republicans has more to do with union power and influence and not the future employment prospects of the people of Wisconsin. Think about this before going to the polls Tuesday.

The TPX Wisconsin Tour is going according to schedule, but it’s proven to be a tough slog at times, with some incidents occurring that will be reported on at a later date. For now the focus is on meeting the voters at the rally stops and bringing home a win on Tuesday for Wisconsin.

THANK YOU to those bloggers who answered yesterday’s call for much needed coverage: Terresa Monroe-Hamilton at NoisyRoom Blog; Trevor Loudon at New Zeal; Jim Hoft at Gateway Pundit; I Own The World’s BigFurHat; Michelle Malkin and, John Ruberry at Marathon Pundit. We could use your help again today.

Kenosha and Milwaukee rallies will be updated below – stay tuned.

**The Radio Patriot has posted an update about union troubles on the way to Kenosha.

***Tour Embed Andrea Shea King reports that the Kenosha rally has concluded. And even though the venue had to be changed at the last minute due to union pressure–link above–Andrea reports the crowd was much larger than expected, upwards of 400. A very welcoming crowd, patriotism on full display. About a half dozen protesters were in attendance but didn’t cause any trouble. Our TPX crew is on the road for this evening’s 5:30 rally in Milwaukee. Stay tuned…

THE RIVOLI REVUE in Kenosha 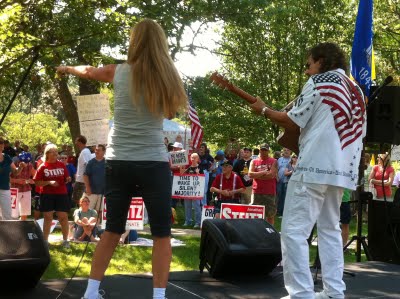 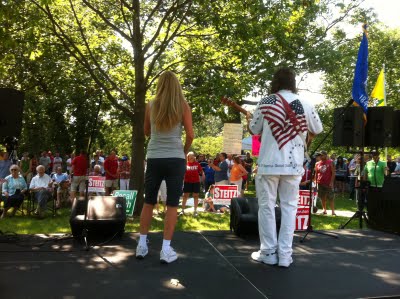 Hello everyone we’ve just finished up the Tea Party rallies in Kenosha, Wisconsin and the suburbs of Milwaukee, Wisconsin and I’ve included photographs of the event below.

I also am pleased to pass along reports on these events from some of our Coalition Partners in this effort.