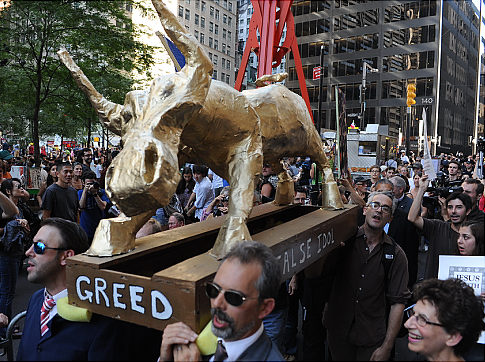 Occupy Wall Street is a movement that has been planned and executed by Marxists in America. There may be lots of useful idiots at play in the movement, but nevertheless, if you follow the money and influence, you find the likes of Democratic Socialists of America, ACORN, SEIU, the DNC, the Obama administration, the Working Families Party, the New Party, Tides and of course, that old evil spider, George Soros.

So far, so good, right? Them bad, us good… You can imagine my horror when I heard of how the left was seducing Conservatives and Libertarians to the dark side. Some of the things they say ‘are‘ what we are saying. But as Beck says, watch out who you stand next to. And while you are at it, watch out for their agenda. I fear we will lose many patriots to the Occupy Wall Street movement using the guise of stopping bailouts. Don’t get me wrong… I’m all for ending bailouts. There should never have been any – period. Just not this way. You can’t stand with Marxists and not be tainted by their goals, no matter how noble the cause seems.

Last week, I received word that Oath Keepers was joining Garrett John LoPorto and the Wayseer movement. LoPorto heads Occupy Boston. This turns out to not be quite accurate and Oath Keepers claims that LoPorto is only a volunteer. In fact, he has since been removed as even a volunteer. I’ll give them the benefit of the doubt since I know many loyal patriots who belong to that organization. They had an editor who got carried away after seeing a video and reading a book. It happens – but rest assured, that before anything like that would ever occur at Oath Keepers, there would be a full investigation and a vote on it. These are Constitutionalists and real American patriots. But I would suggest that they stay far, far away from Occupy Boston if they can. Marxists of a feather flock together and recruit heavily from the masses.

Oath Keepers is not who I am referring to specifically here. I’m referring to rank and file Americans who are hurting. Who have lost their jobs and have been unemployed for a long, long time. People who can’t figure out how they are going to feed their children and themselves much less where the rent/mortgage is going to come from. If you were scared, hungry and desperate, you’d be angry too. And many are being seduced by the Occupiers’ siren song of: ‘Get ’em!‘ But the call is a death trap that will crush America on the rocks.

Yes, there are evil banks. But you know who was behind the latest atrocity of Bank of America putting a $5 fee on debit card usage and Citibank leveling a $15 fee on their debit card users? Why, the Progressive yelling the loudest from the Senate floor of course: Tricky Dickey Durbin. The guy who added an amendment to the Dodd-Frank Wall Street reform bill that caused the banks to have to add these fees. The banks warned it would happen and it is always middle America who pays in the end. Always. And he did it because he can’t be held liable for speaking from the Senate floor and causing harm to Bank of America if it causes a run on the bank. Thanks Dick.

Yes, there are evil corporations and evil rich guys like George Soros. There always have been and always will be. But by and large, big companies and the wealthy are what create jobs and prosperity in this country. Without them, you have no America. You have Russia.

So instead of protesting the banks, corporations and feeding the ‘eat the rich‘ mantra, Americans should look to the Fed and to the White House and DC. This is where protests and anger should be leveled. Not through a Socialist/Marxist lens that focuses on wealth redistribution and something for nothing schemes. Instead of living in the freest nation on earth and having the chance for anyone to succeed, regardless of race, age, religion, sex or political bent, everyone will equally live in poverty and slavery and the elite will rule over us. That is what Occupy Wall Street accomplishes. It doesn’t address the burdens this nation is struggling under, it advances our demise at warp speed.

Here is the breakdown of the connections behind Occupy Wall Street and those who created the movement from The Blaze:

One more, Jim Wallis is out there supporting, organizing and recruiting for the movement, claiming that occupiers stand with Jesus. All I can say to Wallis is, ‘beware false prophets.’

Those are the players and they are behind the Occupy Wall Street movement. They will lure as many in as possible before the door slams shut. They’ll lure Americans in with soothing words and false friendship and camaraderie. But, it is a trap – top down, bottom up, inside out. They want people to be so desperate that they will plead for the government to come in and take over. You might get a little food and a roof over your head, but you will end your days as a slave. If you are going to fight, make it for all the marbles. Make it count and keep your freedom. Don’t answer the occupiers’ siren song.

24 thoughts on “The Occupiers’ Siren Song”