By: Old Ironsides
Conscience of a Conservative

Well, Obama’s mask is finally beginning to slip off his face. A few days ago the 2012 Obama campaign released its offical slogan, FORWARD, and immediately the origins of this favorite action word became known thanks to Obama’s greatest adversary, the conservative bloggers. From now until November the Democrats will be marching FORWARD to victory. Just as their fellow communists have done in the past. Most of those communist posters from past history were not written in English so they’re not as obvious, see the blog written by Hack Wilson, http://www.hackwilson.blogspot.com/ But, even though Obama’s Democrats left out the revolutionary soldier carrying the red flag in their poster, at least one of those communist posters from modern history is in English. And it is most convincing in its true meaning when the Leading Light Communist Organization uses it.

So now the Obama Democrats have taken the next step in convincing everyone of their true purpose, spreading the philosophy of Karl Marx. Only the Obama Democrats are being a bit cautious because they are revealing their plan in little pieces. Such as their new web site propaganda piece “The Life of Julia” wherein the Democrats show their love and compassion for everyone from the cradle to the grave. The part they left out is what they expect from you in return. 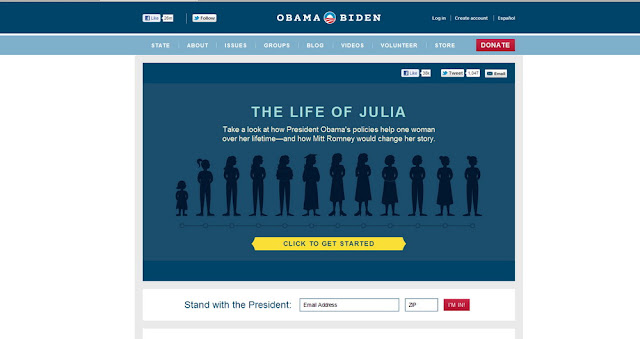 No, it isn’t Socialism, it isn’t Communism, it isn’t Marxism, its just our good old Democrat pretender Barack Hussein Obama telling America that life is better when you depend on the government to give you everything you need. Is the word “depend” the right one to use? Maybe the sentence should read: Life is better when you allow the government to control your life, because control is what the Democrats want. Too bad the wisdom of a true American patriot, Thomas Jefferson, has been forgotten by so many Democrats today. Back in the days when our Founding Fathers were creating our Republic, Jefferson argued that “A government big enough to give you everything you want is big enough to take away everything you have.” Maybe that’s why so many liberal teachers are rewriting American History today because they don’t want tomorrow’s voters to think about these things.

I know where I’ve heard that Democrat slogan before. It was first written by Karl Marx when he said: “From each according to his ability, to each according to his need.” And Karl Marx and Friedrich Engels were the authors of The Communist Manifesto. The Obama Democrats have presented the later part of the Marxist statement, the part that appeals to greed, but they conveniently left off the first part, the part that dictates what the government wants in return. Wikipedia reveals the complete origin, along with the full text in which it appeared.

The complete paragraph containing Marx’s statement of the creed in the ‘Critique of the Gotha Program’ is as follows:

In a higher phase of communist society, after the enslaving subordination of the individual to the division of labor, and therewith also the antithesis between mental and physical labor, has vanished; after labor has become not only a means of life but life’s prime want; after the productive forces have also increased with the all-around development of the individual, and all the springs of co-operative wealth flow more abundantly—only then can the narrow horizon of bourgeois right be crossed in its entirety and society inscribe on its banners: From each according to his ability, to each according to his needs!

Then another search of Wikipedia reveals more on the application of this basic communist philosophy.

Proletarians and Communists
The second section, “Proletarians and Communists”, starts by stating the relationship of conscious communists to the rest of the working class, declaring that they will not form a separate party that opposes other working-class parties, will express the interests and general will of the proletariat as a whole, and will distinguish themselves from other working-class parties by always expressing the common interest of the entire proletariat independently of all nationalities and representing the interests of the movement as a whole.

The section goes on to defend communism from various objections, such as the claim that communists advocate “free love“, and the claim that people will not perform labor in a communist society because they have no incentive to work.The section ends by outlining a set of short-term demands:

1. Abolition of property in land and application of all rents of land to public purposes.

3. Abolition of all right of inheritance.

4. Confiscation of the property of all emigrants and rebels.

5. Centralization of credit in the hands of the State, by means of a national bank with State capital and an exclusive monopoly.

6. Centralization of the means of communication and transport in the hands of the State.

7. Extension of factories and instruments of production owned by the State; the bringing into cultivation of waste-lands, and the improvement of the soil generally in accordance with a common plan.

8. Equal liability of all to labor. Establishment of industrial armies, especially for agriculture.

9. Combination of agriculture with manufacturing industries; gradual abolition of the distinction between town and country, by a more equitable distribution of the population over the country.

10. Free education for all children in public schools. Abolition of children’s factory labor in its present form and combination of education with industrial production.[15]

The implementation of these policies would, as believed by Marx and Engels, be a precursor to the stateless and classless society. In a controversial passage they suggested that the “proletariat” might in competition with the bourgeoisie be compelled to organize as a class, form a revolution, make itself a ruling class, sweep away the old conditions of production, and in that step have abolished its own supremacy as a class. This account of the transition from socialism to communism was criticized particularly during and after the Soviet era.

4 thoughts on “From the cradle to the grave, Obama says the government should control your life.”