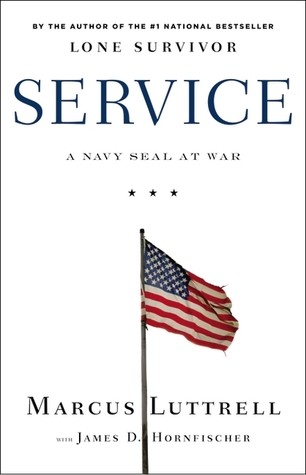 I have long admired Marcus Luttrell and I simply loved his book Lone Survivor. He’s the very definition of a brave man. A warrior who is not afraid to fight evil and take a bully all the way to the ground and then bury him. Which seems extremely fitting to me. His book Service embodies this fighting spirit. The fight is not over until you win or die – Luttrell is a fighter and a winner of the first order.

Luttrell weaves the story of the lengthy battle in Ramadi from 2006 through 2008. From bloody battles to red tape with bureaucrats – you get an inside look of what it is like to be on the front lines and you get a sense of what the term ‘Service’ truly means. It also causes a mixture of emotions in me to rise to the surface. Pride in our military warriors, because they are the very best of us; anger at our leaders who tie our warriors’ hands and exponentially raise the risks of getting killed in combat and sadness at what we are becoming at the hands of the Progressives.

From Bookworm Room – an excerpt from Luttrell’s book on a battle that went awry for the SEALs:

When the QRF [quick reaction force] arrived outside [the building being attacked] with a couple of Bradleys, the squad moved quickly downstairs and lined up to break out of the house. They tossed two smoke grenades outside to cover their exfil, then burst through the door. Two Iraqis were in the lead, followed by Elliott [Miller, who had shrapnel wounds and was bleeding heavily], hobbling along with help from Johnny Brands. The jundis [Iraqis fighting with the Americans] had just hit the street when the world went dark. The IED might have been dropped down on them from the roof in a backpack. Or it might have been planted in the ground or hung on the gate while they were inside. All we know for sure is that it was a trap set by enemies who were obviously wise to everything we were doing and how we were doing it. They knew that straight-on firefights were losing propositions. So they snuck around and planted their bombs where they thought we’d be. They sure got it right that time. An enormous explosion engulfed our guys as they exited the house.

The explosion killed the two Iraqis leading the way; the first man simply disappeared, evaporated by the blast, his scan remnants driving away in the air, a pink mist, while the second, partly sheltered by the leader, was nearly sliced in half at the waist. The blast still had enough force to devastate Elliott. It tore into his body wherever it wasn’t protected by body armor. His legs were shredded from midthigh down. He had a hole in his right shoulder and the parts of him that weren’t covered by plates were being eaten into by a terrible chemical residue.

Johnny was better off, but that wasn’t saying much. Both his feet were attached to his ankles only by the Achilles tendons.

Looking down at Elliott, Dozer saw that his friend’s legs seemed loose and detached in the bloody mess of his pants. The steel rifle magazine stored in his front vest pouches had been dished in by the blast. Elliott’s watch was charred and black but, amazingly, still kept time. Only his body armor saved him from being killed instantly. Dozer ran his hands under Elliott’s plates, checking his torso for wounds. As he removed Elliott’s gear, Dozer realized he didn’t have the first idea where to begin treating such a seriously wounded man. That was when he heard another explosion, a smaller one, go off in the courtyard. A grenade. The insurgents were still out there, probing them, probably planning another attack. (Service, pp. 145-147.)

And that is just a taste of the excitement and action in Service. It is a book you cannot put down and gives you even more respect for those like Marcus Luttrell and the SEALs. These are truly my heroes. He fought for God and country. He fought for us. The warriors in our military fight every day in the same vein and put their lives on the line in the noblest of duties. If you like clear cut good and evil and a fight where good wins (unlike politics typically), this is a terrific read. I got a second copy just to pass around – that’s how much I love the book. But it is also a book about loss and recovery. A book about God and service. It will humble you and make you thankful for those who go where others won’t or can’t.

Authors send me books all the time. I have a massive stack that I need to read and review and I love doing it. But for the first time in my life, I went to a publisher and asked for a copy. Luttrell’s books are just that good. I hear Father’s Day is upon us and this would be a great gift.

Navy SEAL Marcus Luttrell returned from his star-crossed mission in Afghanistan with his bones shattered and his heart broken. So many had given their lives to save him-and he would have readily done the same for them. As he recuperated, he wondered why he and others, from America’s founding to today, had been willing to sacrifice everything-including themselves-for the sake of family, nation, and freedom.

In Service, we follow Marcus Luttrell to Iraq, where he returns to the battlefield as a member of SEAL Team 5 to help take on the most dangerous city in the world: Ramadi, the capital of war-torn Al Anbar Province. There, in six months of high-intensity urban combat, he would be part of what has been called the greatest victory in the history of U.S. Special Operations forces. We also return to Afghanistan and Operation Redwing, where Luttrell offers powerful new details about his miraculous rescue. Throughout, he reflects on what it really means to take on a higher calling, about the men he’s seen lose their lives for their country, and the legacy of those who came and bled before.

A thrilling war story, Service is also a profoundly moving tribute to the warrior brotherhood, to the belief that nobody goes it alone, and no one will be left behind.

Hello all… Today, I am reading from the letters of Ronald Reagan. He confirms everything I have been reading and studying up on and I mean everything. Reagan was at one time a Democrat and voted for Roosevelt during his time in college.

Reagan later learned that both the hard core radical liberals and socialists/communists had hijacked his beloved “loyal opposition” party. He also discovered that the Communist Soviet Union had a hand in this political penetration. Even as President of the S.A.G., he was fighting Communist infiltration in Hollywood. Reagan was leading the fight long before Glenn and Rush… Reagan had written a book about this warning all about Communism worldwide and about American socialism as well.

As President of the United States, Reagan revealed his historical knowledge on both America and the world around him. As I read his letters, I note he had been reading the very same books I have been reading: George Washington, Cicero, Adam Smith, Thomas Jefferson, John Locke and oh yeah, that small 4 page document, the US Constitution.

I have Reagan’s speeches from when he was President and these revealed a leader reintroducing Americans back to the founding father’s principles and common sense values that defined America and separated her from the other 3rd world Communist hell holes. His wide knowledge of basic capitalist economics is what set him apart successfully from Jimmy “malaise in America” Carter.

Reagan’s humor and attitude even in the worst of times was and still is today second to none. (In 5 minutes the bombings in Libya will now begin – a Reagan classic.) Reagan earned the respect he got from both enemies and colleagues alike.

Reagan’s letters reveal a man, husband, dad, leader and a fighter for America. This bit of history will piss off Democrats… Reagan and John Wayne have two things in common. Both were good friends and both, long after their deaths, are still the most popular and famous icons among both average Americans and the military. No president in 30 years has ever beaten Reagan’s popularity within the military. Not even the last Bush in office beat him and the troops love President Bush.

Reagan has been the only president to take down a Communist empire without a shot being fired. Reagan was a leader who knew the value of staying out of the way of the people and let Americans rediscover what they believed in… themselves and in America.

In the wake of the coverage of Brett Kimberlin and his tactics, RedState.com editor Erick Erickson found himself the victim of a “SWATting.” Tony Katz speaks with former DOJ attorney J. Christian Adams of the ElectionLawCenter.com about how citizens can end “SWATting” and fight back against those who want to silence free speech.

U.S. veterans of the Iraq and Afghanistan wars threw their medals towards the site of the NATO Summit May 20, in what was called the most dramatic antiwar action by ex-GIs since Vietnam. One-by-one, 45 service members from all branches of the military took to the stage to tell their stories while thousands of anti-NATO protesters listened and cheered.