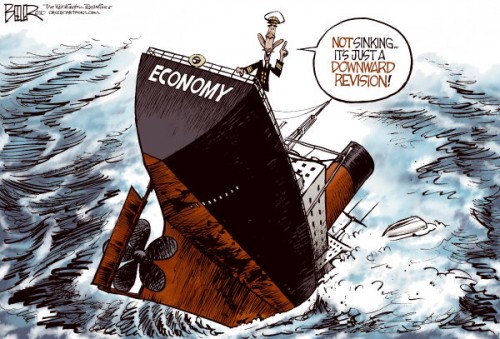 And the depths of chaos beckon while the financial sands beneath our feet shift into oblivion. Today, we offer you a metaphor salad to describe the current progress of the financial apocalypse. Yep, more happy news from the economic war front.

To say we are skating on thin ice globally as well as here in the US is an understatement of epic proportions. It’s the new and improved walking dead economies – it’s the end of the economic banking world and I feel fine. In fact, it should leave all of us breathless.

While Wall Street manipulates the hell out of the markets and bankers play games with our future (and they have butter fingers by the way), we are told to chill… everything is under control and we are in a slow recovery. Black is white; up is down. And by the way, I have a bridge that is to die for — just sign here. Never mind the second Great Depression taking place. Pardon moi if confidence is in the toilet these days and if we don’t believe the powers that be any more. We’re fickle that way.

It was claimed that MF Global was a freak – that it would never happen again. That is until PFGBest came along and made lightning strike twice in the same spot. What? Nothing to see here sheeple… Quick, invest, invest, invest! From The Economic Collapse:

All hell broke loose when the National Futures Association discovered that a bank account that was supposed to be holding 225 million dollars of customer funds was only holding about 5 million dollars instead.

So where is the other 220 million dollars?

That is a very good question.

Of course it is not a promising sign that the head of PFGBest tried to commit suicide when this news came out.

Next, we were told a wave of city bankruptcies would NEVER occur in the US, we nodded and smiled like idiots and said that we believed the weasel politicians. California is turning into Greece at an alarming rate with three cities in the last 2 weeks going toes up and many more to follow — first came Stockton, then Mammoth Lakes and now San Bernardino. Just nod some more if you get it now. From The Los Angeles Times:

The city’s fiscal crisis has been years in the making, compounded by the nation’s crushing recession and exacerbated by escalating pension costs, lucrative labor agreements, Sacramento’s raid on redevelopment funds and a city reserve that is tapped out, officials said.

And this is not unique to California. It’s happening all over the US, you just don’t see it in the press because it makes Obama look bad. Take a long, hard look at Scranton, Pennsylvania where all city employees were just put on minimum wage. They wouldn’t raise taxes (who would want to?), so the mayor reduced wages. He had to do something because they are BROKE.

We were told to have faith in global interest rates, that they couldn’t possibly be manipulated by insiders — that is until the LIBOR scandal. Whoops! In fact, watch this scandal… it will literally rock the world and bring economies to their knees. Count on it. If financial dreamers dream, then it’s nightmares all around. Welcome to global collusion. More from The Economic Collapse:

It turns out that banksters have been colluding to fix global interest rates for years.

“Liborgate” is being called the biggest financial scandal in history. Libor is important because it is one of the key benchmarks used to set prices for hundreds of trillions of dollars of loans, securities and derivatives.

British banking giant Barclays has already admitted that they were involved in manipulating Libor.

Barclays has already agreed to pay $453 million in fines to British and U.S. authorities.

But the truth is that it would have been totally impossible for Barclays to have manipulated Libor by themselves.

So who else was involved?

The Wall Street Journal puts it this way:

At stake is both the integrity of the world’s financial system and the credibility of the U.K. authorities to police it. Long before the current scandal, many European policy makers had concluded that London during the boom was the Wild West, whose loose standards are a threat to European financial stability. The Libor scandal suggests U.S. regulators have reached similar conclusions. The Commodities Futures Trading Commission, the U.S. regulatory body that first started investigating rate-fixing, left little doubt how seriously it regards the abuses it uncovered.

Get the hell out of the system, right now. Don’t stubbornly stand on the deck of a fiscal Titanic as it sinks. Head for the lifeboats and nix the suicide folks.

We were also told that Greece was an anomaly. Just another twist of fate — couldn’t happen again. Until Spain that is, who looks an awful like a repeat of Greece only worse. And as has been foretold on this blog over and over, it’s a chain reaction and more catastrophe to follow and soon. It’s summertime in Fiscal Hell, don’tcha know.

Don’t let the austerity they are pushing in Greece fool you. It consists of taxes that no one can pay if they want to continue eating. It does reduce spending and government bennies, but it is too little too late. Europe is on the way down, big time. Spain will make Greece look like a walk in the fricking park. Again from The Economic Collapse:

Can anyone still possibly deny that Spain is going down the exact same road that Greece has gone?

Could you imagine going to the store and paying a 21 percent sales tax?

Rajoy is promising that these measures will get Spain back on the right track.

Of course we have already seen how well such austerity measures have worked in Greece.

The unemployment rate in Spain is already up to 24.4 percent, and now these austerity measures will slow the economy down even more.

No wonder there is rioting in the streets. You can see high quality footage of the rioting that has been going on in Spain this week right here. At one point police were seen firing rubber bullets at the protesters.

But of course the citizens of Spain could not live way above their means forever. At some point every debt bubble ends, and when that happens the results are often incredibly painful.

You are looking into America’s not-too-distant future. Truth be told, if the Obama administration was honest about our unemployment rate, it would read over 15% and personally, I think it is closer to 23 or 24%.

So, as we gleefully dance ever closer to the global fiscal cliff — and a crumbling cliff at that — maybe just maybe we should actually look at what is going on around us globally and locally here in the US. It’s not just finances, it’s morality, ethics, our culture — the whole ball of wax and we are coming undone quickly. As a nation, we need to fall to our knees and declare a covenant with God and fast or we will realize a reckoning few can envision. Thus endeth the lesson.

23 thoughts on “Dancing on the Global Fiscal Cliff”