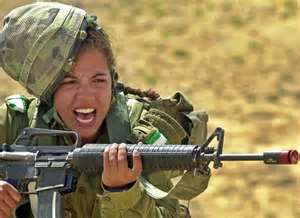 Every week on Monday morning, the Council and its invited guests weigh in at the Watcher’s Forum with short takes on a major issue of the day. This week’s question: What Is Your Reaction To The Obama Administration’s Recent Policy Change To Allow Women In Combat?

The Razor: If it’s fine for the Israelis, it’s fine by me. As far as I’m concerned in the battle with militant Islam we are all on the frontlines – men, women, old and young.

GrEaT sAtAn”S gIrLfRiEnD: Combat girls? Reckon all girls should sign up for Selective Service then…

The Noisy Room: I know that many women will disagree with me, but I think allowing women in combat and on the front lines is a horrific decision on several fronts. First of all, it is instinctual for a man to protect a woman, no matter what they say. If a man sees a woman in distress during combat, he is much more likely to put himself at risk (and the mission) and run to her aid. Physically, women are just not as able to handle the rigors of combat as men are either. War is hell and it is brutal business. It tends to haunt men for the rest of their lives as it did my father, who never spoke of WWII and the Kamikaze attack on his ship. An attack which killed everyone on the deck but my father and many of those deaths were from sheer shock. He suffered nightmares the rest of his life and woke up swinging at remembered enemies. Is it wise to subject the mothers of children to such horrific circumstances? It changes you. These men, many times, come home broken physically and emotionally. It is a sacrifice men have carried for millenia and it is a role that is meant for men to lead in. It is not a matter of sexism, it is a matter of survival. The brotherhood of the special forces shouldn’t be diminished by mixing the genders, exposing the ranks to sexual situations and tensions and feminizing our warriors. Men have always put women first, it is our heritage and we shouldn’t mess with that instinct. Let the guys be the badasses and handle the enemy – hand to hand, up close, with at least a chance of survival.

If a man is captured, he may be tortured and killed. If a woman is captured, especially if it involves Jihadists, her fate will be a thousand times worse. She would not only be raped over and over, but her death would not come quickly. She would be used as bait to kill others. Whereas this ploy does not generally work with male prisoners, it is far more likely to succeed with a female as females strike a deeper chord in our subconscious. This is why females are used as suicide bombers. While Israel’s IDF forces require women to serve three years, one can understand this because they don’t have the breadth and depth of soldiers to draw from. Until 2000, these women served in non-combat roles, but since 2000, as I understand it, they instituted an Equality amendment that provides that women can serve in any position men do. Currently about 3% serve as combat soldiers and the military leadership is having some of the same discussions we are. This does not change my viewpoint of women being on the front lines.

All of this is unnecessary. Women are great in command positions and under stress. They are great as pilots and in other positions. But on the war front, in my opinion, they are an unnecessary distraction from the task at hand. This is a further weakening of our military. It is par for the course for Leon Panetta. It is meant to appease the liberal base for Barack Obama, without an eye to the rigors of combat and the realities of war. Women now truly have an equal opportunity to be drafted and a greater opportunity to die. This is a move guaranteed to get more people killed – but hey, the elites making the rules aren’t on the front lines are they? Not yet any way.

The Glittering Eye: Since the laws capping the number of women and restrictions on rank in the military in the United States were repealed in 1967 and women were allowed in jobs in which combat was likely to be seen starting in the 1990s, women in combat have been a foregone conclusion. The challenges now are in preserving force readiness.

The scholarship on women in combat is ambiguous at best. Some indicates few issues; other scholarship suggests the possibility of extreme problems in morale. I guess we’ll need to learn to deal with them.

I have little doubt that some women will be able to deal with the physical and psychological issues of combat. The challenge will be to avoid the temptation to lower the requirements to allow more women to qualify.

Experience in civilian life with police and fire departments suggest that doing so will be quite difficult.

JoshuaPundit: The example a lot of proponents of this use is the Israeli Defense Forces, where women have been in combat situations for some time. What most people don’t take into account is that Israel’s situation is very different in many ways, and the IDF has some fairly stringent rules on the matter.

Israel has always fought defensive wars on its borders and they have been wars that have been of fairly short duration, not huge overseas deployments that go on for months. And the U.S. has an all volunteer military, not universal conscription. Having troops, reserve and regular in the field for a week or two relatively close to home is far different than the current American military experience. The IDF also has restrictions on where women may serve (Israel’s elite units like the Sayaret, which sometime perform missions behind enemy lines are closed to them). With near universal conscription, the IDF’s rate of female participation is around 34%, about double ours. But only 3% serve in active combat roles, mostly in recon, signals, artillery, field intelligence, and communications, although there are infantry positions open to women. My point here is that the Israelis understand the nature of the enemy they’re dealing with and assign all but a very small fraction of women accordingly.

Also, the culture’s different. Being a small country, a lot of people whom know each other tend to serve together in the same units. Aside from the fact that Israel’s armed forces contain a lot of Jews whose religious beliefs prohibit them from even touching a woman not a family member or a spouse, the fact that men may be serving with a woman who lives in the same neighborhood or whose family they know, along with the short, relatively close to home deployments and the extremely strict IDF regs on the matter tends to minimize harassment and sexual assaults. In the IDF, every unit with women serving in it has its own female officer assigned who women can go to if they have complaints about how they’re being treated.

In comparing this with America’s situation, several questions arise.

Given the political clout of radical feminists in America, are standards going to be relaxed simply to be politically correct? Are promotions going to be given based on gender merely to look good? There are already problems with sexual harassment, pregnancies and rape in the military because of the long foreign deployments, differences in culture, and the simple nature of human beings. Are women in combat going to have access to someone they can easily report harassment or assault to?

At a time when our military is being severely downsized and soldiers and marines with 10 and 15 years service are being pushed into early ‘retirement’ that gives them a reduced pension, does this new position mean that experienced, battle tested male troops are going to be replaced by inexperienced female troops simply because of political correctness?

The way we answer these questions will determine how successful this is. Given whose ultimately in charge of the military and instituting policy today, I’m not optimistic, but hope to be pleasantly surprised.

Bookworm Room: I think it’s a terrible idea, and I say this despite knowing that there are women out there who are incredibly strong and have military accomplishments that are equal to those you’ll find in ordinary infantry troops. I also say this despite knowing that, in various wars, when the enemy came right to the doorstep, the women grabbed their weapons and fought.

The exceptions, however, should not create the rule. On average, women are smaller and weaker than men. The only response the military can have to meet the reality that women are weaker and smaller than man is to lower standards, which puts all front-line troops at risk.

On average, men feel honor bound to protect those who are smaller and weaker, which will severely compromise overall unit safety. Guys will make stupid decisions when they see the “little sister” of the unit in danger — especially if she’s in danger of rape and sexual torture from an enemy that believes all Western women are whores.

Not on average, but every darn time, women pee standing up and, unless they allow the military to sterilize or drug them, they have periods. Another biological reality is that women get pregnant — and they’re a lot more likely to get pregnant in adrenalin-rush situations with lots of equally adrenalinized young men around. And here’s another reality: sexual rivalries will also work to tear apart unit cohesion.

No matter how you look at it, putting women on the front line is a dreadful idea, one that ignores biological imperatives and realities. In another words, it’s an idea that only a Leftist could love.

The Colossus of Rhodey: Never having been in the military, my position is the same as it was when gays in the military was being debated: I’ll defer to those with the actual experience … and NOT the politically correct politicians. As it is currently, I’ve no issue with women serving in combat roles as long as physical (and other) standards are not lowered for them. If any woman can meet the standards required for combat roles, I see no reason why they shouldn’t be able to serve in such a role.

The Independent Sentinel: Well they wanted equality and they got it.

From the male perspective, I don’t like it. Two of my sons are former marines and they both said the physical for women is about half what it is for men. That does not equate for me. They either do what the men can do or they are out.

2 thoughts on “Forum: What Is Your Reaction To The Obama Administration’s Recent Policy Change To Allow Women In Combat?”