The Fourth Amendment to the US Constitution states: The right of the people to be secure in their persons, houses, papers, and effects, against unreasonable searches and seizures, shall not be violated, and no Warrants shall issue, but upon probable cause, supported by Oath or affirmation, and particularly describing the place to be searched, and the persons or things to be seized. 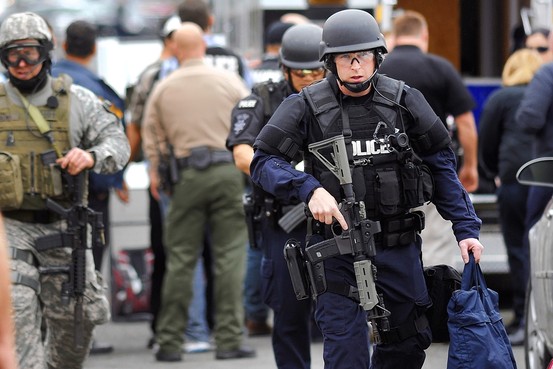 WSJ: Today the U.S. has thousands of SWAT teams. A team prepares to enter a house in Vallejo, Calif., on March 20, above.

In today’s America, we walk a razor’s edge between Constitutional rights and security. Predictably, as Benjamin Franklin correctly feared, security is winning. There is a must-read article at the Wall Street Journal that caught my attention yesterday and it starkly brings to the forefront the militarization of America’s cities: Rise of the Warrior Cop.

Americans are confused and torn over their security — just as Obama wanted. In the name of national security after 9-11, we condoned the Patriot Act (including yours truly). We made a serious error and we opened the door to ever more governmental fascism. Next came the DHS, the TSA and a myriad of regulatory, faceless enforcement bureaus who have no pity and no recognition of the rights of Americans. Now, on a daily basis, we are subjected to the degradation and belittling of those whose job it is to ferret out individuals and radical groups that would harm the US. The Secret Service, the military, the CIA and as of late, the NSA, have all been involved in scandals. All need to be cleaned up and reigned in. But things are about to teeter out of control on that front as well and many of the agencies may either be no more or be reformed into entities that are not recognizable as American, but as tyrannical forces that are the enforcement arm of a dictatorial government. That was Obama’s agenda all along. To remake America into his image, ala the Frankfurt School of thought.

Since the inception of the War on Drugs in the 1970s, no-knock, warrantless searches and seizures have become commonplace. This was accomplished under a Republican president by the way. Watergate was not the only crime of Richard Milhous Nixon or of the Congress during that time period:

At about the same time, President Richard Nixon was declaring war on drugs. Among the new, tough-minded law-enforcement measures included in this campaign was the no-knock raid—a policy that allowed drug cops to break into homes without the traditional knock and announcement. After fierce debate, Congress passed a bill authorizing no-knock raids for federal narcotics agents in 1970.

Over the next several years, stories emerged of federal agents breaking down the doors of private homes (often without a warrant) and terrorizing innocent citizens and families. Congress repealed the no-knock law in 1974, but the policy would soon make a comeback (without congressional authorization).

Whether the intentions were noble or nefarious, the results are the same — Americans have been increasingly subjected to military-style invasions of their homes and businesses, many times with either the citizen and/or cops getting killed mistakenly. On top of that, possessions and property are seized by the authorities with no provable charges necessary. The burden of proof of innocence falls directly on the citizen, which is a clear violation of Constitutional principles. The property is usually kept, auctioned off and the profits kept by the arresting authority. Correct me if I’m wrong, but that smells a lot like theft.

The latest count on SWAT teams nationally is over 1,200. Everyone has them from the IRS, NASA (what the hell does NASA need with a SWAT team?), Fish & Wildlife, the Department of Education, to every alphabet agency, state and local police force on the map. SWATting (the practice of calling in SWAT on someone you don’t like) has become commonplace. A dangerous game indeed that could get someone killed. Many conservatives, bloggers and celebrities have been subjected to this prank. Complaints abound, but prevention does not. It’s only a matter of time until someone dies and that could lead to even more violence.

The government is gleefully ratcheting up militarized police forces with the massive oversupply of weapons, ammo, armor and drones. They are using targets modeled after civilians: moms, kids, grandparents… Military type drills are being held in cities large and small all over the US unannounced – scaring the crap out of civilians. Which is their intent. And while this is going on, Obama, his minions and other Marxist factions in America are deliberately stirring up race riots and protests, poking the American badger into mass confrontation (or giving the appearance thereof) which will give them the excuse to bring their jackboots down on America’s neck, declare Martial Law and finally once and for all get rid of that pesky Constitution and put a ‘beloved’ leader in iron-fisted control of a once free and moral nation. Perhaps pinning her under the theologic thumb of Shariah Law and the Caliphate.

Time to turn back the clock:

Many longtime and retired law-enforcement officers have told me of their worry that the trend toward militarization is too far gone. Those who think there is still a chance at reform tend to embrace the idea of community policing, an approach that depends more on civil society than on brute force.

In this very different view of policing, cops walk beats, interact with citizens and consider themselves part of the neighborhoods they patrol—and therefore have a stake in those communities. It’s all about a baton-twirling “Officer Friendly” rather than a Taser-toting RoboCop. 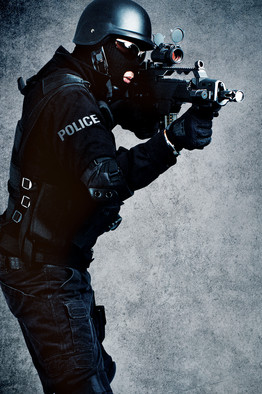 More and more, we see the recruitment of police officers whose romantic view of enforcement does not consider the rights of Americans, but rather getting home safe no matter the overall cost. What happened to “protect and serve?” It should not be “conquer and arrest.” We are playing a dangerous game without frontiers and the American battlefield is littered with the bodies of those who clearly no longer have a voice. The Constitution is being silenced and shredded along with America as a whole. I pray we can bring America back from this brink before the term “battlefield” ceases to be a metaphor and the “game” becomes a real civil war.

31 thoughts on “Games Without Frontiers – the American Battlefield”