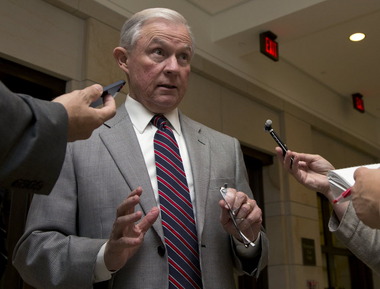 Jeff Sessions has been someone I have admired for a very long time. I believe he is a good and principled patriot. He speaks for Americans, not to them. He’s on our side on the Constitution, the economy, the military, the budget, illegal immigration and Obamacare. When almost everyone else left, Sessions stayed to support Ted Cruz. His actions speak louder than any propagandic rhetoric coming from the Progressives on either side of the aisle.

While Cruz had company while he spoke during the evening, he didn’t have much.

Cruz noted at around 9:50 p.m. ET that he was speaking to an audience of two Senators and one member of the House of Representatives. One of the two Senators was Alabama’s Jeff Sessions. The other was Mike Lee (R-Utah).

During the course of the evening, Sessions asked Cruz to yield for questions, alternately applauding the freshman senator for his stand against the health care legislation, and asking him to clarify specific points he opposes in the bill.

Cruz said of Sessions, “I appreciate his friendship and wisdom.”

How is it that Sessions made two indisputable points that were pointed out by Gulag Bound, that no one has refuted?

Sessions’ charge that they have foisted Obamacare on us to cause mass suffering and confusion:

(1) so we would become all the more helpless and dependent,
(2) so they could inflict us with direct, Marxist control of health care.

Not one RINO or Democrat has denied it. It is obvious to most Americans now that this is the case plain and simple. Once again, the silence is louder than all their pontificating.

And so, Sessions throws in with the Tea Party Whacko Birds… and we are proud to have him in our midst.

From Breitbart — a direct quote from Sessions:

“Well, there’s division sometimes just over tactics like the healthcare bill and how is the best way to get rid of it,” Sessions responded. “We’ve got a new group of very dynamic, determined new Senators that just got elected and they’re not interested in business as usual. They’re pushing an agenda they believe reflected the promises they made to their constituents when they got elected, things that they believe in.”

“I think it’s very great. I think it’s healthy,” he continued. “I think Ted Cruz and Mike Lee and Rand Paul are doing their best every day for the benefit of this country. I agree with them a lot of times on tactics and procedures, sometimes I may not, but all in all, one of the things that has occurred has been that they have been a positive force in slowing down the immigration bill.”

While Cruz was attacked from the Left and the Right, Sessions stood with him and we will remember it Senator. Count on it. Americans are watching and we know you for the patriot and unsung hero that you are.

2 thoughts on “Jeff Sessions – A Patriot and an Unsung Hero”