China, by far the largest single owner of U.S. Treasury debt, has been abandoning Treasury bonds to invest directly in U.S. land, building and businesses. Recently, China entered an agreement with the European Union to swap currencies, forgoing purchases of U.S. dollars — the world’s reserve currency — to finance transactions. Both of these activities are a consequence of the risk associated with astronomical U.S. debt, almost doubled since President Obama took office. On October 11, China called for the world to be “de-Americanized,” its leaders ridiculing Washington over the shutdown impasse. 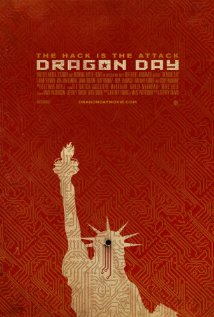 It is against this backdrop of real events that Dragon Day, a tense thriller set to release November 1st, depicts a Chinese takeover of the U.S. after our government defaults on its debt. Dragon Day Director Jeffrey Travis says, “When I would pitch the film to people, I could rarely finish the logline before the reaction was “Oh my God, that’s really going to happen”. Our joke was we had to finish the film before it became a documentary.

Given where we are today, that may not be so funny.

The story begins with Ex-NSA engineer Duke Evans, who has lost his job due to the continuing financial crisis. Forced to foreclose on his home, he resettles his family (wife, daughter and sister) in a mountain cabin inherited from his recently deceased grandfather. They have barely gotten in the door when things start happening. Lights go out, the TV goes blank and a huge airliner swoops by at treetop level, erupting in a fireball on the next mountain.

The Chinese have launched a cyber attack. A secret computer virus embedded in Chinese manufactured computer chips has allowed the Chinese military to turn them off remotely. America’s entire computer-based infrastructure comes screeching to a halt: power goes off, lights go out, autos and trucks stall, trains go off the rails and planes fall out of the sky.

Evans quickly understands what has happened. He was the NSA engineer who designed a secret government cyber warfare program he now realizes was compromised. He thought he was doing this for his country, but it turns out that many in government have been secretly working for the other side all along. TV service is temporarily restored, and the President announces what has happened, followed by an eerie red screen with the enemy flag symbol and announcement: 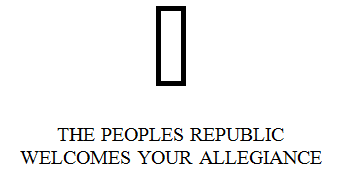 Evans destroys cell phones and anything else that can lead the enemy to his hideaway. The country quickly reverts to pre-industrial conditions, and the movie offers a fairly realistic window into what would actually happen in such a situation. Stores are ransacked. People begin to starve and die of thirst. Roving bands of thugs begin robbing and murdering.

Anarchy rules. But you are offered escape. If you willingly attach a “Citizen’s Freedom Band”, presumably you will be spared further anguish. Urgently needed food and water are just around the corner, so you think. But instead it proves to be a high tech dog collar which will kill you if you move out of your assigned zone. Surprisingly, the local sheriff’s office has a large supply of these, obviously obtained before the attack occurred.

Unlike Red Dawn and similar fare, there are no absurd heroics, or unrealistic depictions of the town forming a militia to fight off the Chinese hoards. This feels much more authentic. It depicts the kind of anarchy that reigns following major natural disasters, like Hurricane Katrina. Individuals and small groups might band together for good or ill, but organized resistance is nil.

There is no ability to communicate or travel, and food and water are almost nonexistent. Many people do what average citizens would do facing starvation and uncertainty, they put on the bracelets. It becomes obvious that many within government at all levels have conspired with the enemy, but it also becomes obvious that for most, their treason will not pay off.

While some might take comfort in the fact that this is “just a movie,” according to Defense Tech, an American-designed, Chinese-made microchip used in defense applications was recently discovered to have a virus hardwired into it. The article states:

Basically, Chinese cyber spies can use the chip’s built-in malware to decipher military passcodes and gain remote access to the chip and reprogram it to do their bidding; ‘permitting a new and disturbing possibility of a large-scale Stuxnet-type attack via a network or the Internet on the silicon itself,’…

This discovery has led experts to worry that all Chinese manufactured chips may have similar vulnerabilities.

Furthermore, the events depicted in the movie are almost indistinguishable from what would happen following an Electro-Magnetic Pulse (EMP) attack. EMP is the result of either an unusually large solar storm or high altitude detonation of an atomic bomb. It roasts electrical circuitry. As in the movie, aircraft would fall from the sky, transportation would cease, and energy, food and water supplies would vanish. Iran has conducted missile tests believed to be test runs for EMP attacks.

Evans’ neighbor Albert, a good friend of his deceased grandfather, has the only vehicle that still works, an old 1976 Ford truck, built before computer chips were used in autos, but this is quickly commandeered by the local police. Like most good characters in a movie however, the truck makes a reappearance later on. 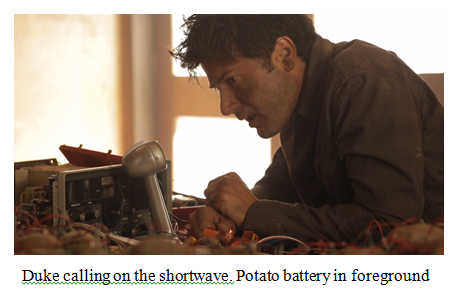 There are some gimmicks the tech-savvy will enjoy. Albert brings over an old short wave radio, but the battery is dead. If Evans can just reach his old NSA boss, he knows he can get help. He rigs up a potato battery to run the radio. Don’t laugh; they work! The only thing that bothered me was where the heck did he get all those potatoes?

It also bothered me that they didn’t appear to be using the apparently plentiful potatoes as a source of food or water when these ran short. They could have, and did give a few potatoes to two kids who came to the door begging.

But this was a small detail. The movie was fast moving and kept me on the edge of my seat. I appreciated the realism. While watching Communist thugs getting blown away by vengeful high school kids in Red Dawn was gratifying, it was also unrealistic.

A genuine takeover would not go well for such resistors. Dragon Day depicted more of the things that would really happen: friends, neighbors and authorities turning against you — even the U.S. military, I am afraid to say, as would likely happen in such a situation. At least it would now that Obama has purged patriotic leaders from the military. This movie showed a family doing its best to innovate and survive in a chaotic situation — much more believable.

I don’t want to spoil the rest of it for you so I’ll just leave it there. If you are into this kind of survivalist, end-of-the-world-as-we-know-it type film, Dragon Day will not disappoint. The acting is convincing and the entire storyline, right down to the way different people might react in such a situation, really rings true. With all the stuff going on around us in the real world, this movie is all the more frightening.

No sugarcoats here. See it in theaters November 1st. You can also get it on DVD, Blu-ray or USB wristband. They even have a “Government Shutdown” special!