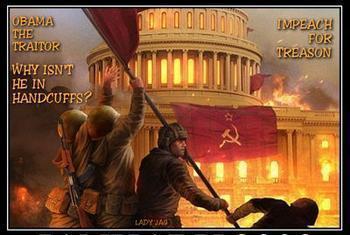 Ahhh… Raising money through paranoia. The DNC is a master at it. But is it really paranoia when they are truly after you? Impeachment is a real and growing possibility for the Marxist-in-Chief and many of us relish the coming clarifying event of historic proportions. I would pay everything I have for a front row seat and popcorn. I will record the proceedings and pass them on to my children, grandchildren and great grandchildren. I will play them at family gatherings and events. This Presidency and all his followers are THE most corrupt in history. When their bottomless nefarious deeds are dragged, screaming and bleeding into the light of day, you won’t need sitcoms or reality TV – it will be a blockbuster to remember, trust me.

Last night, the DNC sent out a panicky, beseeching email blegging for money because the big, bad Republicans are going to impeach Dear Leader. Let me clarify that… the ones with a spine are coming after him and there are very few of them. But what they lack in numbers, they make up for in courage and ethics. The Daily Caller made my evening – literally:

The email, subject line “Impeachment,” was sent to Obama for America supporters, imploring them to contribute to the DNC’s 2014 efforts. “What do these people all have in common?,” the email asked, featuring quotes from Republican Sen. James Inhofe of Oklahoma, Rep. Michele Bachmann of Minnesota, Rep. Kerry Bentivolio of Michigan, and Rep. Blake Farenthold of Texas discussing the possibility of impeaching Obama for one of his numerous instances of presidential misconduct.

The DNC email discussed the “I-Word” and said that “Republicans are actually excited about the idea.”

“Show these Republicans that they are way, way off-base, and give President Obama a Congress that has his back,” according to the DNC email, noting that Democrats need to win 17 GOP House seats to reclaim a majority.

The beasts under our beds are here folks and they wear Armani suits and Prada heels. They covet power and wealth and tell us that only they know what is best for the American riffraff, who only cling to their Bibles and guns. They are Communists and they despise you and America. I say impeach Obama with prejudice and prosecute the lot of them. Long jail terms all around and we should no longer fear the term “treason.” Oran’s Dictionary of the Law (1983) defines treason as “…[a]…citizen’s actions to help a foreign government overthrow, make war against, or seriously injure the [parent nation].” The US Constitution defines treason in Article 3, section 3 thusly: “Treason against the United States, shall consist only in levying War against them, or in adhering to their Enemies, giving them Aid and Comfort. No Person shall be convicted of Treason unless on the Testimony of two Witnesses to the same overt Act, or on Confession in open Court.” Witnesses are lining up as we speak. Obama has done this over and over… enabling Islamic countries such as Iran against us, handing the keys to the kingdom to Russia and China and breaking America financially and militarily to serve us up to other countries on a treasonous platter. The devil has been celebrating the demise of the last hope for the free world – but the devil can go down to Hades and stuff it.

Justin Amash got it right when he said that Obama’s expansion of executive branch authority is “setting the stage for something very dangerous in the future.” Obama has basically made the executive branch the controlling body, making the judicial and legislative branches merely parrots of his policies. They have been compromised and neutered. Obama does not bother with Constitutional practices, but instead uses diktats to further his agenda. Treating the American people as the Proletariat, Obama has seriously underestimated us. We do not bargain for security, hiding behind diplomacy and forked tongues. Slaves are made in such ways.

Any other president in history would have been brought down and impeached for any one of these scandals:

And that is only a very partial list. The greatest hits list goes on and on and on. It’s a disgrace we have let this go on this long and it is due to Progressives on both sides of the aisle putting money and power ahead of their constituents. A silent coup is taking place with enemies within and without in our government and Obama is leading the charge.

Impeachment… hell, yeah! In fact, both the DNC and the RNC should be very, very afraid. The RNC is coming after the Tea Party and we’re coming after all of you:

Even though Karl Rove’s American Crossroads brand has been damaged after the group declared war against conservative candidates, the group will reportedly try to influence the 2014 midterm elections by bullying campaigns and creating groups that, on the surface, do not seem to be affiliated with them.

We will not let our Republic fall and Karl Rove and the rest of the Progressive RINOs can go know themselves and pound sand:

The battle for the heart and soul of the Republican Party has begun. On one side is the Tea Party. On the other side stand Karl Rove and his establishment team, posing as tacticians while quietly undermining conservatism.

Progressives see impeachment for Obama on the Marxist horizon and Americans see the reinstatement of the Republic. The halls of power need a good scrubbing and cleaning out and the Tea Party is up to the task. Aim small, miss small, boys.