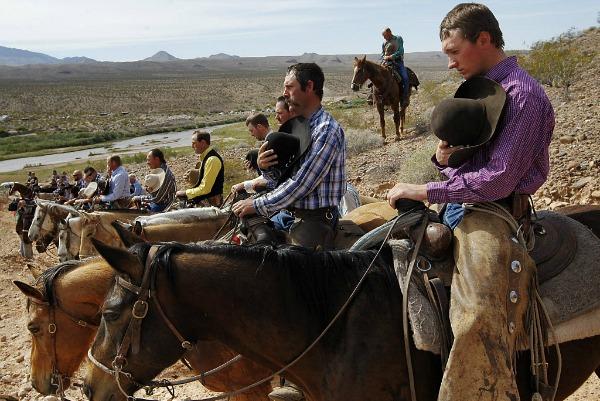 Kholten Gleave, right, of Utah, pauses for the National Anthem outside of Bunkerville, NV while gathering with other supporters of the Bundy family to challenge the Bureau of Land Management on Saturday.

On his radio show right now, Glenn Beck is talking about his take on what happened this weekend on Cliven Bundy’s Nevada ranch. He’ll be interviewing Bundy on the radio program during the third hour this morning.

But in the meantime, there’s this… a piece by Herschel Smith that (coincidentally) echoes what Glenn is saying today. Here’s the link to Glenn’s thoughts. And here’s what Herschel Smith wrote in the same vein. Glad there are men with this vision and understanding.

BY HERSCHEL SMITH
8 hours, 58 minutes ago

I had previously mentioned that I would not weigh in on Cliven Bundy. I usually like to read my homework very carefully. I don’t know Cliven Bundy and he doesn’t know me. I know little about his family and his history, but fortunately for us, this has all been made very easy.

This has nothing whatsoever to do with tortoises or grazing fees. Dana Loesch has done a good job of explaining it, and by now it has made its way to several other venues. It has to do with evil, greed, cronyism, nepotism, and malfeasance in office.

There are several takeaways from this affair. First of all, the main stream media is dead. The reports of conditions on the ground were given to us by blogs, alternative media, email and social media like Facebook and Twitter. The main stream media still hasn’t caught up. Perhaps in a month of two some large news publication like The New York Times or The Chicago Tribune will come out with an expose on Harry Reid’s evil in this affair, but don’t bet on it, and even if they do, it will be a month too late.

This death has been a long time coming, but it is finally here. The only thing anyone needs the main stream media for now is to cite their ridiculous editorials for the purpose of ridicule. The collectivists and the press have been like two ticks and no dog – both of them parasites. Eventually parasites have to perish. Unfortunately for us, many more parasites are in cahoots with the collectivists, but that’s for another time. Right now, don’t lament the death of the main stream media. They deserve it. Good riddance. You can write their obituary and bid them farewell. They’re done.

Next, Mike Vanderboegh has harped on a theme, that being “We won’t fire the first shot. We will shoot in self defense.” Sure enough, it almost came to that, but not quite. The militia who did show up held their composure and did remarkably well. No one took wild shots, no one escalated the situation, but a strong message was sent.

That said, this is far from over. The BLM is still very active, and for those who are of like mind, i.e., the notion that the federal government owns land is morally abominable, there are many miles to go before we rest. In fact, this wasn’t even a skirmish. It was a prelude to coming attractions if the federal government doesn’t check its own power (something not likely to happen). There are many federal agencies (DOJ, ATF, EPA, BLM, DHS, DEA, etc.), and together they can successfully trample rights just about anywhere over just about anything they wish.

Next, while I do like my AR-15, for the men who were providing overwatch and security for the protesters, I wondered if I was in that position which weapon I would want? My answer? My scoped, bolt action rifle. Leave the squad rushes and advance through fields of fire to the U.S. Marines on base at Camps Lejeune and Pendleton. Such would have been folly in a situation like this. One commenter remarked concerning a previous article that a sniper is anyone firing from a clandestine position. I don’t buy it. If that’s true, I can arm my mother and stick here in a hole and call her a sniper. Skilled shooting would have been at a premium if this had escalated to an engagement.

Finally (and there will be many more observations we will be able to make as this all sinks in), since the roots of this are so easily explained, the judgment is just as simple. Tyrants wish to usurp God’s authority. Thus their lusts and desires for rule over others runs antithetical to the economy and administration of the Almighty.

The halls of tyranny are the abode of demons and haters of God. But God will not be mocked. Tyrants and those who enable them will lose their souls, but even before that, time isn’t on their side. Tyrants will be held accountable both in time and eternity.

Be of strong heart and good cheer. You are not on the losing side. 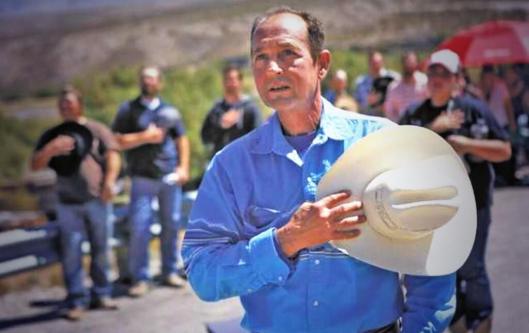 Terresa Monroe-Hamilton also has posted about the Bundy/BLM issue: