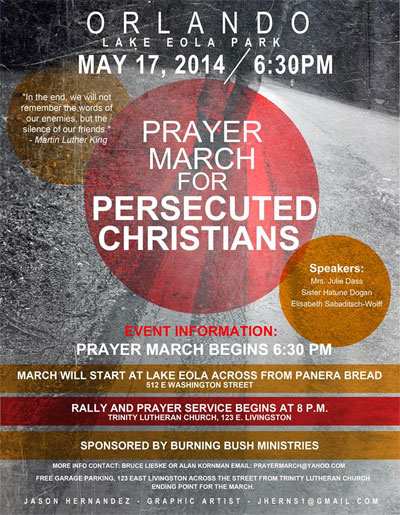 ICLA is concerned about the impact that some sharia principles have on religious freedom. Many atrocities around the world have been committed in the name of sharia and ICLA wants to see these brought to an immediate end. Much of our participation at the Organisation for Security and Cooperation in Europe (OSCE) Human Dimension meetings are devoted to this end. By participating in this march, ICLA wants to send a message of support to the many people around the world who suffer religious persecution and have their freedom of worship undermined.

Here are some headlines that outline the plight of Christians in particular:

Boko Haram and the Kidnapped Schoolgirls

Some background about the march:

A known Islamist has been selected to stand for the Conservative Party in an east London borough.

According to Ted Jeory in the Express, Mufti Shah Sadruddin, who has no known previous links to the Conservative Party, has taken to his Facebook page to urge Muslims in the borough of Newham to vote for whoever is best placed to remove Newham’s elected Mayor Sir Robin Wales. Jeory writes: “Anonymous leaflets have been circulating in the borough listing the Muslim candidates people should vote for, regardless of party.” 1

Sadruddin is joined on the Conservative list by two former candidates of the Respect Party; a hard-left group with one MP – the equally hard-left George Galloway.

If the Express is right, and Sadruddin is urging Muslims to vote for any party likely to punish Sir Robin, perhaps the Conservatives need to ask questions about what messages its candidates send out. They may also question exactly why Sadruddin is so keen to stand for them in the first place. Maybe the so-called “Mega Mosque” gives some indications.

For the past few years in the London borough of Newham, a campaign has been afoot to build a mosque four times the size of St Paul’s Cathedral. The Riverine Centre would have been one of the largest Islamic Centres in Europe, but planning permission was refused by Newham Council in late 2012. Conor McAuley, Newham Council’s executive member for regeneration and strategic planning, said at the time that “the proposed mosque building is too big and would have an impact on important historic buildings nearby.” 2

The group behind the plan, and who would have controlled the mosque, is known as Tablighi Jamaat. Formed in 1926 and an offshoot of the Deobandi movement, Tablighi Jamaat has long been accused of encouraging segregation from non-Muslims and the suppression of women.

Some campaigners against the mosque said it would represent a headquarters for this controversial group, from which they were likely to proselytise in east London and dominate other mosques and Islamic groups.

Furthermore, according to the Evening Standard, Tablighi Jamaat has been described as the “antechamber of terrorism” by French officials, as they seem to produce a rather disproportionate number of followers willing to engage in terrorist acts, such as Richard Reid (the ‘shoe bomber’) and two of the July 7 2005 London bombers. 3

It is in its apparent treatment of women though that causes perhaps the greatest concern. In 2012 for example, it was reported that Tablighi Jamaat were barring women from their own weddings in London. Dr Taj Hargey, director of the Muslim Education Centre of Oxford, said of such weddings: “The ceremony is normally a male-only affair where a male relative, usually a father or brother, signs on behalf of the woman and the service is conducted by a male priest, an imam, in front of male witnesses exclusively.” 4

It was the planning refusal by Newham Council, and therefore the refusal to allow a “mega-mosque” run by a deeply troubling group, which seems to have riled Mufti Shah Sadruddin. Sir Robin Wales, who Sadruddin wants to see removed, opposed the building of the “mega-mosque” at the time.

London’s Mayor Boris Johnson has expressed concern that the Tory Party may be being exploited. This is not the first time such concerns have been raised.

Labour MP Jim Fitzpatrick, back in 2010, worried that the Labour Party was being infiltrated by members of the Islamic Forum of Europe, which calls for the establishment of sharia law in Britain. 5

Whatever the motives and whatever the results, major parties really ought to know better than to appoint candidates who believe: “The Islamic state is the greatest contribution to humanity.”