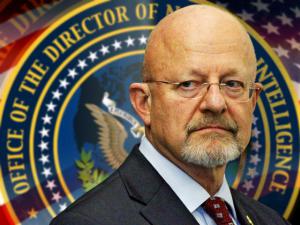 Color me not surprised in the least. Trevor Loudon and I have warned you for years that there is a very real connection between Barack Obama, his Administration, Russia and China. It’s one thing to claim there are direct ties, it’s another to catch these governments in bed together.

Judicial Watch has done just that and my hat is off to them. It turns out that Theodore H. Moran, an adviser to James Clapper, the Director of National Intelligence, has been a naughty little subversive. Yes, he has… worse still, he’s been caught. Moran has been working for the Chinese company Huawei Technologies while on the US government payroll. No biggie, right? Wrong. Huawe Technologies has been cited by the United States Congress as having potential ties to Chinese intelligence.

According to Judicial Watch, the Chinese company, Huawei Technologies, has been cited by the United States Congress as having potential ties to Chinese intelligence. According to a 2012 House Intelligence Committee report, Huawei and the Chinese government’s relationship could provide for “economic and foreign espionage by a foreign nation-state already known to be a major perpetrator of cyber espionage.”

DNI adviser Moran may have a serious conflict of interest due to his relationship with Huawei. According to Judicial Watch, his role at the Office of DNI was to “provided intelligence agencies with judgments on key international issues, including foreign investments in the U.S.”

Judicial Watch is seeking to obtain:

Judicial Watch President Tom Fitton said of the pending suit, “Once again, we’ve had to sue the Obama administration to get basic information about a pressing national security issue. We want basic documents to evaluate any conflicts of interest at the heart of our nation’s intelligence establishment – the Office of the Director of National Intelligence.”

So, let me get this straight… On the one hand, Clapper screams about the threat of cyber espionage. On the other hand, he’s literally bringing in Chinese spies to gather data from our intelligence agencies. ‘Two-faced, hypocrite, traitor,’ doesn’t seem to quite do Clapper justice. Remember, Clapper is the one who lied about Muslim Brotherhood contacts with this Administration. Evidently, if you are an American enemy, Clapper hearts you. Supporting a known enemy of the US and providing them aid is commonly known as treason.

As in the IRS scandal, the Obama Administration is refusing to play nice and provide transparent records and information. Gee, what a surprise.

This whole issue is part and parcel of Obama’s crony capitalism. Moran’s office deals with making judgement calls on highly sensitive international issues and foreign investments. Do the math. When we tell you a silent coup is going on in America where our enemies are being invited in and given control and wealth by the US, we mean it. ‘Selling out America’ has taken on a whole new dark meaning here.

Moran has since resigned in 2013. This was after Rep. Frank Wolf (R-VA) complained to Clapper that Moran’s work with Huawei “compromises his ability to advise your office.” Moran claims to have disclosed to NIC in 2010 his relationship with Huawei Technology. But that does not absolve him of wrong doing here — and if you disclose you are working for the enemy to the enemy, what’s the diff? No one ever looked into Moran’s dirty work or his dealings with the Chinese. No one ever asked, why is the DNI/DOD and Communist China so cozy these days?

And in a monolithic bout of hubris and arrogance, Moran had this to say to the AP:

According to an Associated Press story at the time of Moran’s resignation in May 2013, Moran authored a policy paper distributed by Huawei Technologies arguing that “targeting one or two companies on the basis of their national origins does nothing for U.S. security in a world of global supply chains.” Moran also criticized what he termed “a policy of discrimination and distortion that discourages valuable inward investment from overseas, while providing a precedent for highly damaging copycat practices in other countries.” Moran told AP that he was “totally transparent.”

They are being transparent. They are out in the open, conspiring with our enemies and brazenly so. How can you not see a conflict of interest (at the very least) or the spies among us (most likely) and a subversive plot going on here? The Chinese government was paying Moran while he was on the US government’s payroll. He brought their spies into our intelligence agencies — knowingly and with intent. And it never even made the news. Nada, zip — but hell, we can certainly hashtag ourselves into oblivion or sip cocoa with a wimp in PJs. Now that’s news.

Perhaps instead of glorifying a traitor such as Edward Snowden, we might do better to look within the Progressive leadership of our country:

WASHINGTON (AP) — A longtime adviser to the U.S. Director of National Intelligence has resigned after the government learned he has worked since 2010 as a paid consultant for Huawei Technologies Ltd., the Chinese technology company the U.S. has condemned as an espionage threat, The Associated Press has learned.

Theodore H. Moran, a respected expert on China’s international investment and professor at Georgetown University, had served since 2007 as adviser to the intelligence director’s advisory panel on foreign investment in the United States. Moran also was an adviser to the National Intelligence Council, a group of 18 senior analysts and policy experts who provide U.S. spy agencies with judgments on important international issues.

The case highlights the ongoing fractious relationship between the U.S. government and Huawei, China’s leading developer of telephone and Internet infrastructure, which has been condemned in the U.S. as a potential national security threat. Huawei has aggressively disputed this, and its chief executive, Ren Zhengfei, has said the company has decided to abandon the U.S. market.

Moran, who had a security clearance granting him access to sensitive materials, was forced to withdraw from those roles after Rep. Frank Wolf, R-Va., complained in September to the intelligence director, James Clapper, that Moran’s work on an international advisory council for Huawei “compromises his ability to advise your office.”

“It is inconceivable how someone serving on Huawei’s board would also be allowed to advise the intelligence community on foreign investments in the U.S.,” Wolf wrote.

I wonder how many others in our agencies have a ‘conflict of interest?’ Since, evidently background checks are a thing of the past, I guess anything goes in getting a job in the US government and intelligence agencies these days. You just have to be Progressively Marxist to qualify and hate your country. A treasonous streak is a perk.

With all this going on under the sheets in Washington, does anyone believe the faux saber rattling of the Obama Administration at Russia, Iran and China? It’s murderous Kabuki Theater on an international scale. We speak of sanctions on Russia and an Asia pivot for national defense… but how can you defeat your enemy when you are bedding them constantly? Hell, Clapper doesn’t just have uncomfortably close ties to the Chinese government, he’s working with them. Yep, I said it and it is what I believe. We have an unholy alliance with Russia and China going on and the last to know will be the formerly free people of the United States if we don’t turn our elections around and clean House and Senate. Tick tock.