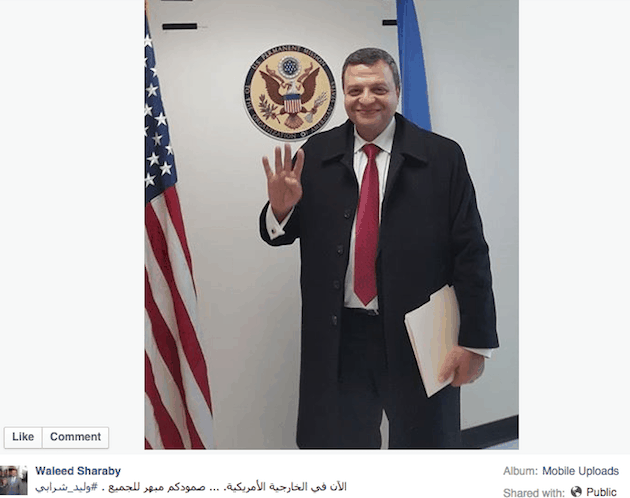 The statement was also released just two days before a major terror attack Thursday in Egypt’s lawless Sinai region, that killed at least 25. On Thursday, a speaker on a Brotherhood-affiliated television station warned foreign tourists and business interests to leave Egypt next month, or risk becoming a “target for the revolutionary punishment movements.” Something very similar was posted on Facebook.

The Brotherhood’s call for Jihad was published to invoke founding ideologue Hasan al-Banna, who “prepared the Jihad brigades that he sent to Palestine to kill the Zionist usurpers…”

“For everyone must be aware that we are in the process of a new phase,” the statement concludes, “in which we summon what of our power is latent within us, and we call to mind the meaning of Jihad, and prepare ourselves and our children, wives and daughters, and whoever marches on our path for a long, unrelenting Jihad. We ask in it the abodes of the martyrs.”

The Muslim Brotherhood is gearing up for bloody terrorist activities, chief among which will be the attempted assassination of Egyptian President Abdel Fattah al-Sisi in all likelihood.

The statement shows an image of two crossing swords and the word “prepare!” between them. Below the swords it reads, “The voice of truth, strength, and freedom.” According to the statement, “that is the motto of the Dawa of the Muslim Brotherhood.”

Al-Sisi is the one who once he became President of Egypt, outlawed the Muslim Brotherhood once more for being terrorists. He’s thrown many of them and their supporters in prison and executed a number of them, I believe. He’s also the one who just recently called for the reformation of the Islamic religion.

Once again, I will refer you to the wisdom of terrorism expert Patrick Poole:

“It invokes the Muslim Brotherhood’s terrorist past, specifically mentioning the ‘special apparatus’ that waged terror in the 1940s and 1950s until the Nasser government cracked down on the group, as well as the troops sent by founder Hassan al-Banna to fight against Israel in 1948,” he said.

“It concludes saying that the Brotherhood has entered a new stage, warns of a long Jihad ahead, and to prepare for martyrdom,” Poole said. “Not sure how much more clear they could be.”

Poole wondered if the call for Jihad would convince Brotherhood apologists that the group still backs violence.

“What remains to be seen is how this announcement will be received inside the Beltway, where the vast majority of the ‘experts’ have repeatedly said that the Brotherhood had abandoned its terrorist past, which it is now clearly reviving, and had renounced violence,” Poole said. “Will this development be met with contrition, or silence? And what says the State Department who met with these guys this week?”

Crickets ensued from the State Department and the Obama Administration. Gee, I’m soooo surprised. Not. The Brotherhood is within our ranks, roaming freely and with great power now. America is now standing against our ally al-Sisi and we want him destroyed. We now are standing against Israel, trying to manipulate her elections and treating Netanyahu abysmally. We actively train and arm the Palestinians to kill Jews. We are aiding Iran in nuking up. We won’t call Islamic terrorists, terrorists. Depending on the day of the week, the mood of the moment and who is watching, we are either conducting faux attacks on radical Islamists or helping them. Watch what your leaders are actively doing – don’t just listen to their spewed lies.

By welcoming the delegation of the Muslim Brotherhood, Obama tacitly gave his approval for terrorism. If al-Sisi is killed, his blood will be on Obama’s already dripping hands.

Here are some clips from Muslim Brotherhood TV channels. Several death threats were made against the Egyptian president and the journalists who support him on these videos.

Cleric Salama Abd Al-Qawi said on Rabea TV that anyone who killed al-Sisi would be doing a good deed. Cleric Wagdi Ghoneim told Misr Alan TV that “whomever can bring us the head of one of these dogs and Hell-dwellers” would be rewarded by Allah and commentator Muhammad Awadh said on Misr Alan TV, that the punishment for the “inciting coup journalists” was death. I wonder what Obama’s reward will be as he bows to Allah and supports global Jihad?

20 thoughts on “The Muslim Brotherhood Calls For “A Long, Uncompromising Jihad” In Egypt After Meeting With US State Department”