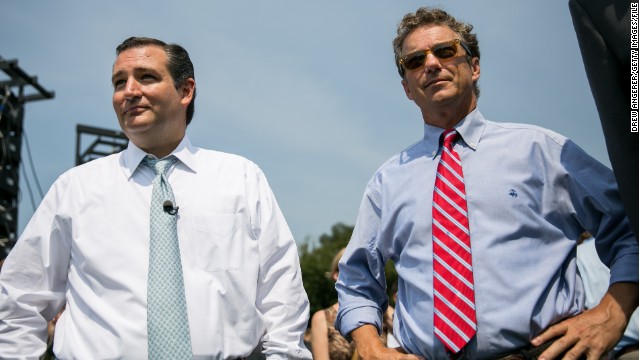 Ted Cruz gave possibly the best speech I have ever heard on the Senate Floor. John Adams would have been proud of him. While on the Senate floor, Cruz beseeched his fellow Republicans to defend the most innocent among us… the unborn. He spoke fervently in favor of defunding Planned Parenthood and protecting the precious lives of millions of unborn babies. This is an issue that most conservatives are in favor of and support. It is at the very heart of being a conservative. The magnificent speech that Ted Cruz gave followed the GOP leadership’s blocking of his attempt to get them to vote on his amendment to strip the funding from the butchers of Planned Parenthood and the apocalyptic funding of the Iranian nuclear deal.

In a voice reminiscent of the Founding Fathers, Cruz flayed the Republican leadership in Congress for utterly failing to “lift a finger to defend life” by defunding Planned Parenthood. These so-called leaders that we have voted in and trusted with the leadership of our country, betrayed everything they stood for by voting 77 to 19 to advance a bill to authorize spending for Planned Parenthood and to fuel the publicly funded abortion mill. Ted Cruz is absolutely right when he points out that Planned Parenthood has committed multiple heinous crimes that they should be charged, prosecuted and convicted for. He asked why the DOJ and the FBI have failed to open any investigation into the death retailer. Then Cruz wondered aloud how it was possible that not one single Democrat has called for that investigation – not one.

How is it that these people that we have elected, many claiming to be Tea Party conservatives, seem determined to vote for everything we stand against? They support murderers of the unborn; they seem cool with Obamacare; they spend like drunken sailors and they let the immigration/refugee crisis here in the US spiral ever further out of control. All of them seem to back Barack Obama to one extent or another. They say one thing and do another. Obama and the Democrats would happily walk through glass or crawl through fire to see their objectives fulfilled. Republicans can’t even be bothered with a ‘nay’ vote. It’s pathetic. The GOP has failed the American people and it is no longer the party of conservatives. They are Democrat-lite. They are moderate Marxists. The Senate, the House, the Presidency and the Supreme Court all need a political enema.

Instead of standing against extortion by Obama, the Republicans fold like a cheap hand. Obama says if Planned Parenthood isn’t funded, then he will veto funding for the entire federal government and shut it down. The Republicans, except for Ted Cruz, proceed to roll over and wet on themselves. Then they crawl to Obama and offer up the unborn on a sacrificial bloody alter, so they can make nice with a demon. It’s abhorrent and evil. Every one of them should be voted out of office. The House and Senate are about to pass a “clean” spending bill, but Cruz said that bill is anything but clean and right he is. It’s really hard to wash all that blood off, isn’t it guys?

We don’t need people in Congress who are willing to play along, to get along. We need warriors who will fight for the American people and what is right. We need constitutionalists like Ted Cruz who will do the right thing no matter what… who don’t care if it costs them everything. For doing the right thing, the principled thing, Cruz has been ceaselessly derided, not just by those in Congress, but by the media, talking heads, pundits and frankly, by those who should know better.

While the Senate voted, Cruz offered up an amendment to stop Planned Parenthood’s funding. It would have also cut off funds for the monstrous Iranian nuclear deal. The next thing that happened was beyond the pale and signaled what I consider to be the end of the Republican Party. In a departure from Senate custom, a quartet of Republican leaders blocked the Texas senator from even getting a vote on his amendment. Only one senator, Mike Lee of Utah, stood with Cruz on the Senate floor. Only one ethical man who was determined to vote to save the unborn and the millions who could die in a nuclear holocaust stood with Ted Cruz. Only one.

Yes, Cruz is an outsider. He has no support in the Senate, because unlike the rest of the sycophants there, he believes in doing what he was sent there to do. Not make buddies and money… not garner power and influence. And instead of holding him up for the leader he is, all I hear are those that paint him as some kind of lunatic or egomaniac because he won’t play nice. It’s beyond infuriating and it explains why we are where we are. When good men like Ted Cruz and Mike Lee are not only not allowed to do the right thing, they are excoriated for it, you have turned into Rome and the barbarians are at the gate. Literally.

Cruz’s hour-long speech goes over this and his disappointment in his fellow countrymen is apparent. When the ones who could actually save our country can longer even be heard because of gangs who run the Senate, then I fear for my government and I certainly fear for my country. But the betrayal goes deeper still. I give you Rand Paul who was a staunch supporter of Mitch McConnell and still is. He is now claiming that Cruz is done for because he called McConnell the liar that he is. I am truly sorry I ever supported Senator Paul. Never, ever again.

“Ted has chosen to make this really personal and chosen to call people dishonest in leadership and call them names, which really goes against the decorum and also against the rules of the Senate, and as a consequence, he can’t get anything done legislatively,” Paul told Fox News Radio. “He is pretty much done for and stifled and it’s really because of personal relationships, or lack of personal relationships, and it is a problem”…

“I approach things a little different, I am still just as hardcore in saying what we are doing, I just chose not to call people liars on the Senate floor and it’s just a matter of different perspectives on how best to get to the end result,” Paul said in the interview.

The Tea Party helped propel Paul forward and what does he do? He sidles up to a corrupt bureaucrat and deftly crawls between the sheets with him. Paul has now chosen his side and it is McConnell’s. He says he’s staying in the presidential race… I don’t know why he should even bother. He has no chance of winning and he should just slink back to Kentucky where he can huddle with McConnell to dominate that state. Rand Paul has finally shown his true face. Compromise is just another word for surrender, Senator.

Cruz is cut from a different cloth than Paul. He will go down fighting. If working the system is in vain, why not? Better to lose a political battle than your soul. Cruz has principles and integrity – Paul, not so much evidently.

Ted Cruz’s campaign is slow and steady. His coffers are being filled by those that know he is a man that actually represents America, not the rotten Washington Cartel.

Supporters of Paul have been steadily joining the Cruz team. Evangelicals are solidly behind Ted Cruz because he is a man of faith, as is his father, Rafael Cruz. He is the very embodiment of an anti-establishment candidate and Cruz will go all the way in his bid to win the presidency. He believes the country is at stake, as do I. One of the reasons Paul has turned on Cruz, who was a friend and a solid one at that, is because of sheer jealousy in my opinion. He is losing support to the Texan and that just ticks him off. Cruz’s “Liberty Leaders for Cruz” coalition is made up of mostly former Rep. Ron Paul (Texas) supporters, a direct affront to Sen. Rand Paul.

I firmly support Ted Cruz for the nomination. The fact that he stands alone in the Senate only adds more to his credit. America is going to have to make a decision… do you want someone who tells the truth and will do the right thing no matter what, or do you want someone who is good at politics and being part of the good ole boy club? Are you willing to fight the dirty Washington Cartel or are you willing to let the Marxists on both sides of the aisle take over permanently? Because that is what we are talking about here. People have screamed for a leader who would rise up and speak and act like Reagan. Ted Cruz is that man and because of that he is feared and hated in the beltway. But every day he goes to do battle in the belly of the beast – that takes courage and fortitude. Isn’t that the leader we need? The one we have waited and cried for? Now is the time to rally behind Ted Cruz with thunderous support and save our nation. If you want to see and hear a modern day equivalent of the Founding Fathers, watch Cruz’s speech below. It says it far better than I can. Ted Cruz is a true constitutional conservative.

Maggie’s Notebook: Ted Cruz: Why Boehner Resigned, Why We Don’t Need Conservatives in Congress (a transcript of the above speech is available here)