There’s a reason for most everything; it’s just a matter of figuring out the divine mysteries which enter our lives. Most of us are slow learners and learn life’s lessons over and over. A good friend once explained it as taking “Attitude 101…Again.”

So it is with 11 year old Assistant Scoutmasters teaching young people Orienteering, the use of maps and compasses in order to stay on the path. This past week a new crop of eager young minds gathered around my compass for instructions; how to orient it to a map, set a course and follow it. Some might have thought the lesson was for the boys; but they’d have only been partially right. 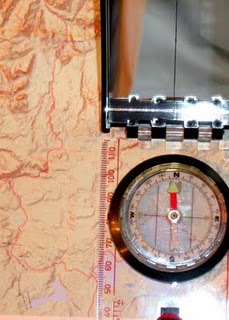 The next night while working at the Houston Temple, there were very few patrons to attend to so I had extra time to read the scriptures. The pages opened to Alma 37 and I began reading at a random spot, towards the end of the chapter:

“38 And now, my son, I have somewhat to say concerning the thing which our fathers call a ball, or director—or our fathers called it Liahona, which is, being interpreted, a compass; and the Lord prepared it.

39 And behold, there cannot any man work after the manner of so curious a workmanship. And behold, it was prepared to show unto our fathers the course which they should travel in the wilderness.

40 And it did work for them according to their faith in God; therefore, if they had faith to believe that God could cause that those spindles should point the way they should go, behold, it was done; therefore they had this miracle, and also many other miracles wrought by the power of God, day by day.”

What are the odds of turning to a scripture about using a compass the day after teaching the scouts? Will wonders never cease? Now, I’ll be the first to admit my compass was purchased at a local sporting goods store and hardly compares to the fine workmanship as was found on the Liahona; and it certainly never exhibited specific instructions from the Lord on how to get through an orienteering course.

“41 Nevertheless, because those miracles were worked by small means it did show unto them marvelous works. They were slothful, and forgot to exercise their faith and diligence and then those marvelous works ceased, and they did not progress in their journey;

42 Therefore, they tarried in the wilderness, or did not travel a direct course, and were afflicted with hunger and thirst, because of their transgressions.”

Some might say they were lost; but they were lost in a multitude of ways. I could explain in my own words; but the next verses encapsulate it perfectly:

“43 And now, my son, I would that ye should understand that these things are not without a shadow; for as our fathers were slothful to give heed to this compass (now these things were temporal) they did not prosper; even so it is with things which are spiritual.

Christians all around the world are looking forward with great anticipation to Easter Sunday; a time to celebrate the resurrection of our Lord and Savior, Jesus Christ. The world we know is in turmoil and yet, if you consider our lot in life, are we not living the “Life of Riley” with all our conveniences?

We complain because gasoline is up another twenty cents a gallon and they say it will continue to rise. We grumble when traffic on the freeways bogs down while listening to an iPod plugged into the stereo system of our air conditioned car. Yea, we have it tough looking for alternative routes on our GPS trying to get home.

“45 And now I say, is there not a type in this thing? For just as surely as this director did bring our fathers, by following its course, to the promised land, shall the words of Christ, if we follow their course, carry us beyond this vale of sorrow into a far better land of promise.

46 O my son, do not let us be slothful because of the easiness of the way; for so was it with our fathers; for so was it prepared for them, that if they would look they might live; even so it is with us. The way is prepared, and if we will look we may live forever.”

This message has been available to anyone with ears to listen or eyes to see, let us not be slothful in observing what has been done for our sakes. Easter isn’t to be celebrated just one day of the year; but in our hearts each day. If we will stay on the path our way home has been prepared. In the name of Jesus Christ, Amen.