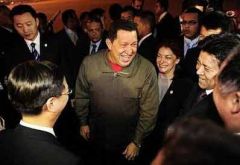 Venezuela and China are charting the road to the future, seeking new strategic alliances in areas such as food security, infrastructure and machine construction.

In building closer relations, the two governments began 2011 with intense joint work by their respective delegations.

In that respect, Venezuelan President Hugo Chávez said their work was facilitated by the presence in Venezuela of major Chinese companies that are willing to collaborate with the Venezuelan government on national development.

Likewise, the two sides are negotiating new credits for the Venezuela national housing program to solve the serious housing shortage, helping to meet the plan to build two million homes in the next six years, 150,000 of them in 2011.

Chávez said 750 housing constructions projects are underway nationwide, to ensure “the end of the miserable huts to which many people were condemned by capitalism.”

Recently, top executives of the Chinese company Citic Group accompanied Chávez on a visit to Barinas, where 5,360 homes are being built.

The first apartments at that site should be ready by September, and the rest in March 2012, Chávez said.

He noted that Citic Group would also build about 20,000 homes in the Fuerte Tiuna district of Caracas, where Venezuela has joint housing construction projects with Belarus and Russia.

The president said that in the coming months, modern equipment would be delivered from China for housing construction in Venezuela…

Important agreements exist between the two nations in other sectors, such as the accords between the state oil company PDVSA and the Industrial and Commercial Bank of China, for the financing of projects and financial services in Venezuela.

Citic Group and the Industrial and Commercial Bank of China agreed on another variant, forming a joint venture to develop oil, mining, finances and construction materials in Venezuela.

During the talks underway, the issue of sending oil to China emerged.

In that respect, Chávez said that Venezuela has the largest reserves of crude in the world, and is currently sending China 400,000 barrels daily. In the coming years, the hope is to raise that figure to one million. China will open up oil and mining operations in South America, which also has one of the largest gold reserves, among other minerals.

According to Venezuelan authorities, the accords with the Chinese were a continuation of existing solid economic integration, and a boost to complementariness with strategic and geopolitical factors.

Starting to feel more and more surrounded by enemies America? You should.

Interesting debate on the history of the Middle East with Harvard historian Niall Ferguson and Ziauddin Sardar.

Zombie made The Blaze! Congrats!! Definitely well-deserved my friend. 8)