Is the Timing of the War With Obama Over Mandatory Birth Control Payments… Another ObamaCare Revelation, God’s Answer to Prayers for Intervention by Many Americans?

The present issue of the Department of Health and Human Services (HHS) requiring (through ObamaCare) that all private insurers, including Catholic charities and hospitals, cover the cost in full for contraception, sterilization procedures, and the “week-after“ pill ”ella” that can induce early abortions is being framed as a fight over contraception. It is not an issue of contraception! It is an issue of religious liberty and an assault on the Freedom of Religion guaranteed by the Bill of Rights.

No politicians ever go after the Roman Catholic Church… Why? Because it is suicidal. Also, with everyone salivating to get the Hispanic voting block, who are almost all Catholics, this recent news of anti-religious freedom in ObamaCare resulting in a battle with the Catholic church could be Obama’s Waterloo.

Jews, Protestants, Evangelicals, Mormons, a coalition of people of faith and even Atheists are standing with the Catholics on this matter. 90% of all Americans identify themselves as being related to some religion, even if not practicing.

So the question is, is the timing of this realization of one of the coming horrors in ObamaCare a huge mistake by Team Obama and perhaps an intervention by God in answer to all the prayers for help and guidance being said by God fearing Americans daily? Or is the primary focus of the left more about creating division and chaos to fundamentally transform America than getting elected… or re-elected? 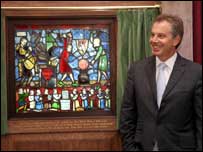 Take a good look back at the famous ‘Fabian’ Window… the group the Progressives stem from. The Fabian Window is a view into the Heart of the New World Order Agenda, and yes that is former Prime Minister of Great Britain, Tony Blair standing by that sinister Window!

The founders of the Fabian Society are depicted in the famous stained-glass Fabian Window[1] designed by George Bernard Shaw. The window was stolen in 1978 and reappeared at Sotheby‘s in 2005. It was restored to display in the Shaw Library at the London School of Economics in 2006 at a ceremony over which Tony Blair presided. 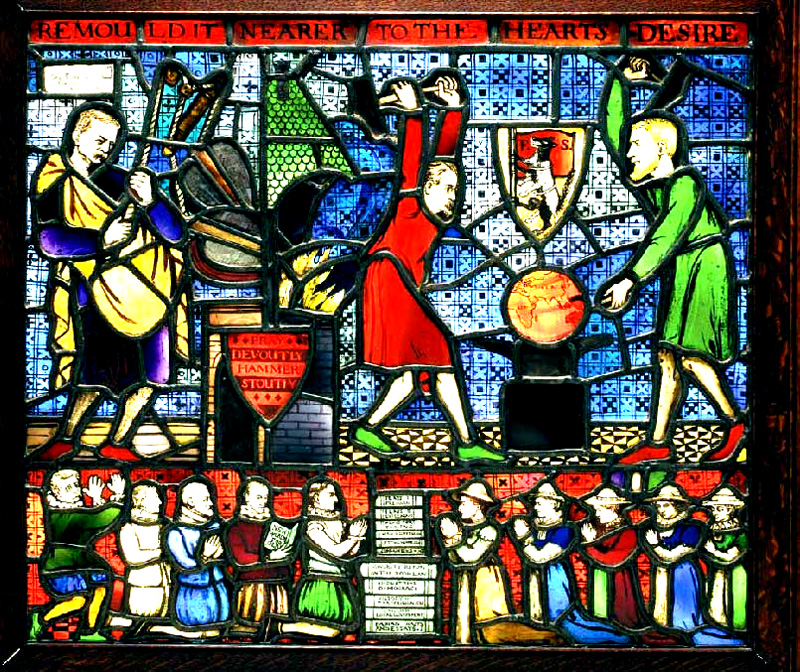 The stained glass window was designed by George Bernard Shaw in 1910 as a commemoration of the Fabian Society, and shows fellow Society members Sidney Webb and Edward R. Pease, among others, helping to build ‘the new world’. Four Fabians, Beatrice and Sidney Webb, Graham Wallas, and George Bernard Shaw founded the London School of Economics with the money left to the Fabian Society by Henry Hutchinson. Supposedly the decision was made at a breakfast party on 4 August 1894. Artist Caroline Townshend (cousin of Shaw’s wife Charlotte Payne-Townshend and daughter of Fabian and Suffragette Emily Townshend) created the Fabian window, according to Shaw’s design in 1910. Also included in the window besides Shaw and Townshend themselves, were other prominent Fabians such as H. G. Wells, Annie Besant, Graham Wallas, Hubert Bland, Edith Nesbit, Sydney Olivier, Oliver Lodge, Leonard Woolf, and Emmeline Pankhurst.

Uber-Progressive and Obama puppetmaster and Hillary Clinton mentor, George Soros, is a graduate of the London School of Economics. Coincidence?

—Obama denigrates religion, covers up religious symbols when he speaks in churches, and proclaims that we are not a “Christian” nation. In fact, we are a Christian nation, but not exclusively so, and far more tolerant of all believers and disbelievers than the Arab countries from whom he courts favor. In those countries you may be maimed, banished or killed if you are not Muslim. Freedom of religion in those countries is but an empty phrase in constitutions that exalt Islam over all other religions. Is Obama remolding our religious heritage? …Taken from CFP’s Beware the Obama Fabian Window. Many feel that Obama is Wolf in Sheep’s Clothing on the Fabian Window Coat of Arms.

Remember, Obama’s weakness is religious people. He doesn’t have the churches and true Bible reading/God fearing Americans behind him. So they are poking us to get us worked up to standup as a focus point making us the fringe and bringing us head to head with the left… the unions, OWS, avowed Progressives, etc.

Below are just a few of the article and perspective on this subject:

· Archbishop to U.S. Troops: Obamacare Reg ‘Blow to a Freedom You Have Fought

Archbishop Timothy Broglio, who leads the Roman Catholic Archdiocese for the Military Services, wrote a letter to be read at all Sunday Masses for U.S. military personnel around the world that said that a regulation issued by the Obama Administration under the new federal health care law was “a blow” to a freedom that U.S. troops have not only fought to defend but for which some have recently died in battle. “It is a blow to a freedom that you have fought to defend and for which you have seen your buddies fall in battle,” the archbishop wrote.

· Updated: *167* Bishops (More Than 90% of Dioceses) Have Spoken Out Against Obama/HHS Mandate

Updated: *167* Bishops (More Than 90% of Dioceses) Have Spoken Out Against Obama/HHS Mandate by Thomas Peters7 days ago In the past I’ve compiled a list of all the bishops speaking out on a particular controversial issue (for instance, over Notre Dame’s invitation to President Obama) — here are the bishops who have spoken out against the Obama/HHS mandate.[See my ongoing coverage of Obama/HHS’s war against religious liberty here, here, here and most recently here. I’m also tweeting more updates @AmericanPapist.] If I have missed anyone please let me know in the comments! And please double-check that your bishop really is not there…

*Here is Ultra Left Wing HHS Secretary Kathleen Sebelius’ Spin (Remember, Sebilius was an ardent supporter of murdered partial birth abortionist, Tiller and her extreme record on abortion has sadly been ignored (or hidden) by the media.)

If the federal government can succeed in forcing people to violate their faith, it will have the power to force anyone to do anything. It is therefore sad but not surprising that Health and Human Services secretary Kathleen Sebelius took to USA Today this week to spin rather than explain her boss’s decision to force people and entities all over the country to fund abortifacients, contraception, and sterilization against their consciences.

However, one of the most startling comments came from former Democrat Rep. Kathy Dahlkemper who said that she would have never voted for the health care bill had she known that the Department of Health and Human Services would require all private insurers, including Catholic charities and hospitals, to cover the cost in full for contraception, sterilization procedures, and the “week-after“ pill ”ella” that can induce early abortions.

For those of us who have followed and fought against the passing of ObamaCare that knew about every ugly detail that has come to light since its passing… and there are many more to come, the amazement about its content keeps creating amazement for us. Government-run healthcare is the crown jewel of socialism and the ugliness contained within has only begun to surface. How dare an elected official who voted on this type of freedom changing bill say, “If I had known….” Read the bills, pay readers, have your staff read it. There really should be a penalty to pay by these people. Election 2012 or the Supreme Court Ruling will be our only chance(s) to rid ourselves of ObamaCare!!

This is not a matter that will just blow over, even though the White House is starting to back peddle on this issue for now; but this is a glimmer into our future if Barack Obama is re-elected. Those in the trenches know that any and all of the compromises we see during this election year will be rescinded as soon as Obama is re-elected.

This fight is much larger than this single issue… As Father Morris stated on Hannity the other night and again today on The Factor… “This is the fight over Freedom of Religion”, the very issue that America was founded on! The Left’s siege on churches has begun!!

Senator Rand Paul stood-up and blasted the HHS mandate as ‘authoritarian’ and ‘totalitarian; “Gloves are off”, he said! Similar remarks from Speaker Boehner, Senator Marco Rubio and congressional politicians from both sides of the aisle.

“The President made a decision, which I think was a wise one that he was not going to unilaterally disarm and leave the field to the Koch Brothers to decide who would be President of the United States and to control the congress. And his commitment was full disclosure…”

Read more at The Daily Beast…