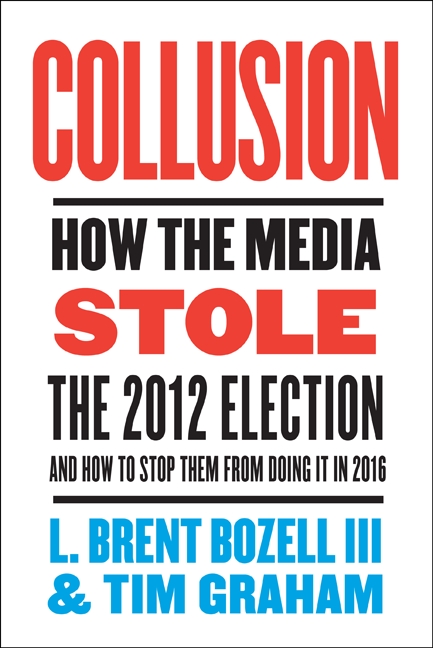 Purchase at Amazon.com or visit Harper Collins Publishers to get your copy today…

Brent Bozell from the Media Research Center has outdone himself this time with the intrepid research and assistance of Tim Graham. Collusion: How The Media Stole The 2012 Election And How To Stop Them From Doing It In 2016 is history and a battle plan all rolled into one glorious manuscript.

With the nightmarish move this summer, I needed a book that would give me hope and enlighten me and this book does not disappoint. You need to get this book — it will open your eyes to what happened in the last election and gird your loins for the next. In the words of Rush Limbaugh, this book is ‘essential.’

The documentation is first rate and they tell the story that the liberals don’t want you to ever hear. Backed by painstaking references and research, they lay out what happened with bullet proof facts and precision. In fact, the Media Research Center has been doing that for over 15 years. The MRC has been one of my daily haunts for years – they provide real news, not Marxist propaganda.

This book details just how dishonest the media is, how manipulative and how corrupt they have become. The media stole the 2012 election with a lot of help from progressives on both sides of the aisle. We must not fall for that in 2016, if we make it that far (and I have my doubts). You want to know how the media operates? How bad they really are? Bozell and Graham pull no punches, so dive in. There’s plenty of read meat to tide you over.

From Ed Driscoll at PJMedia comes one example:

As Brent Bozell told me during our interview, everything boiled to a head in the fall of 2012 and the fallout over Benghazi:

Just think about how [the MSM] pursued foreign policy issues with, say, President George Bush. Remember WNDs and Iraq. They wouldn’t leave that one alone until they got what they thought was the to the bottom of it. Benghazi? They never even started investigating it.

And what do we know? We know also that Candy Crowley, who was the debate moderator in the third presidential debate, took away the shining moment from Mitt Romney when Barack Obama made the outlandish statement that he had, in fact, called it terrorism, denounced it as terrorism the first night, when in fact, he hadn’t. And Mitt Romney looked at Obama in this look of disbelief, like I can’t believe you just gave me the presidency, and she jumped in to defend the President and jumped in to back him up.

And he pulled back to her and he said to her, now say that again. And she repeated her defense of Barack Obama. This isn’t — this isn’t journalism. This isn’t reporting. They pick sides.

So be proactive for the coming battle. Get this book. Read it and live it. And if you really want to piss off a liberal, make him read it too. He might just change his point of view.

Buy Collusion: How The Media Stole The 2012 Election And How To Stop Them From Doing It In 2016 today — in fact, get two.

4 thoughts on “Collusion: How The Media Stole The 2012 Election – A Book Review”