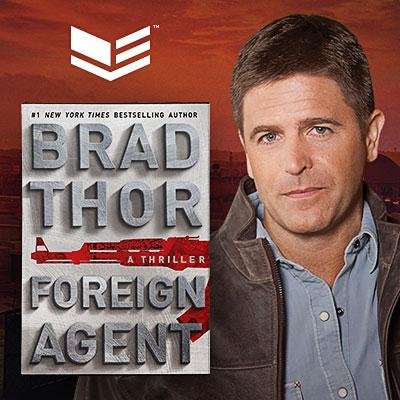 “I am about to suggest something very bad,” said Thor. “It is a hypothetical I am going to ask as a thriller writer.

“If he oversteps that, how do we get him out of office? And I don’t think there is a legal means available. I think it will be a terrible, terrible position the American people will be in to get Trump out of office, because you won’t be able to do it through Congress.”

Thor is terrified as I am. We are not alone. The difference here is that Brad Thor has the stones to come out and say it.

“Listen, I believe it was somebody at National Review that used that exact term, and it resonated with me. …Trump is a boorish orange raccoon. He is an absolute jackass. He is. I’ve said that on your show before. I despise Trump just because he’s such a boorish jackass. But the problem is, is that — damn it, damn it fellow Republicans — damn you, fellow conservatives, who cannot see the potential for tyranny in this man. Shame on you, shame on you all. And damn you all to hell who refuse to acknowledge the potential for tyranny.

“I don’t care that things might be good under Trump. That’s not good enough to gamble America’s freedom away on. It is there for everyone with eyes to see, that this man is a potential tyrant. He is a caudillo; he is a South American strongman waiting to come into power here in the United States. He will demonize anybody that stands in his way. Congress will not stop this man. We had some of our best and brightest in my lifetime on the GOP side, lined up in this primary, and he steamrolled all of them. And he didn’t do it with great ideas. He did it by being an ass, by insulting them, by making things up.

“How the hell do you debate with somebody who pulls facts out of his butt? This guy talked about stuff that wasn’t even true. These poor Republicans brought knives to a tactical nuke fight. They couldn’t win against him. And you’re telling me Congress will stand up to tyranny from Donald Trump? It will never happen. He will demagogue members of the press, members of Congress, judges. He will steamroll them, the same way dictators in South America do. It’s going to happen here. We cannot cede the battlefield to this man. There is still a fight to be had and still a fight to be won. Let’s get back in this fight.”

My principles are firm and set in cement. I will stand with those such as Brad Thor and Glenn Beck and fight the tyranny of Donald Trump and yellow journalists with every fiber of my being. Brad Thor did not threaten Trump’s life. Not even close. He did threaten his move to destroy the Constitution. There are those of us who will not be silenced out there period and they fear us. Brad Thor is at the top of that list and I admire him for it and support what he says.

The attacks against those such as Beck and Thor by outlets like the Drudge Report and Breitbart are just outrageous. It shows how easily some will sell out their principles to follow a charismatic leader. It’s shades of Nazi Germany. Sides are being chosen and the lines are being drawn. Choose your side carefully. Do you stand for the Constitution, or for a strongman? Which is it?