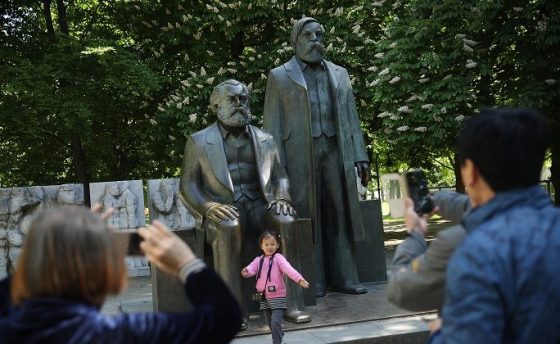 Indeed, the meeting did signal a new era. With CCP leader Xi Jinping re-orientating the Party to a more revolutionary path domestically, it follows that old revolutionary ties would be rekindled internationally.

After the China/Soviet split of the early 1960s, the CPUSA sided with Moscow and was openly hostile to China and pro-China American communists. In the United States, this was more than political rivalry; it often spilled over into violence. Both factions spied on each other for their respective masters in Moscow and Beijing.

According to the archives of the former East German intelligence services, in January 1963, leading CPUSA official Henry Winston met with leaders of the Moscow-aligned East German Communist Party. Winston secretly provided the East Germans with a list of members of the “Progressive Labor Party,” the pro-Beijing communist organization in the United States. The list was prepared by CPUSA comrade Mille Stand, a chemical engineer who fled Germany in the 1930s to escape Nazi persecution. It is very likely that the list of “Beijing parrots” was also passed on to Moscow.

American Maoists were regarded as traitors to the Soviet cause and were treated as such by the Moscow loyalists. The enmity smoldered until the 1980s and only officially ended after the “collapse” of the Soviet Union in 1991. Even then, the CPUSA would remain very standoffish to China for more than a decade.

Mille Stand, incidentally, would go on to introduce his own son Kurt to East German intelligence. Kurt Stand, a member of the CPUSA youth wing, would go on to recruit two comrades, his friend Jim Clark and his future wife, Theresa Squillacote, to the East German cause. Squillacote worked in the Pentagon and handed over many sensitive documents to her East German contacts.

The trio were eventually arrested, and, in 1997, were sentenced to long terms of imprisonment. On his release in 2012, Kurt Stand returned to activism. He is now a leader of the Washington chapter of Democratic Socialists of America (DSA), which serves as the backbone of Sen. Bernie Sanders’ political movement. Incidentally, members of the so-called Metro DC DSA received recent gushing news coverage for harassing Homeland Security Secretary Kirstjen Nielsen while she was dining at a restaurant in Washington on June 1.

The American communist movement has always been disloyal to the United States.

After the retreat of East European communism, the once-dominant CPUSA was hit by mass defections and decreased political influence. Membership fell from a peak of 100,000-plus in its heyday to about 2,000. The party continued to maintain strong ties to the communist parties of Cuba, the UK, Iraq and Vietnam — and even to the still-strong Communist Party of the Russian Federation — but it lacked a strong international sponsor.

It was estimated by Soviet dissident Vladimir Bukovsky that between 1981 and 1991, the Communist Party of the Soviet Union secretly financed the CPUSA to the tune of $21 million. In 1987 alone, the figure was about $3 million.

That was a big deficit to make up. CPUSA slashed staff and turned the five-day-a-week CPUSA publication “People’s World” into the “People’s Weekly World.” In 2009, the long-standing print publication went to online only. While the 1990s and early millennial years were very hard for the CPUSA, fortunes have improved in recent years. The CPUSA has recovered about 5,000 members and the party has formed an alliance with the 47,000-strong Democratic Socialists of America. That lack of foreign money is still a problem, though.

CPUSA/CCP relations did begin to improve a little in the mid-2000s. One high-powered CPUSA group visited China and Vietnam in late 2006.

The delegation — comprising CPUSA was then-National Chairman Sam Webb, Executive Vice Chairman Jarvis Tyner, International Secretary Pamela Saffer and Labor Secretary Scott Marshall — returned with a “wealth of political and cultural experiences they say they hope to share with the U.S. public in order to build better understanding and friendship between the peoples of the U.S., China, and Vietnam.”

While much of the U.S. news media “portrays China as a land of freewheeling capitalism and exploitation,” Saffer said, she indicated that she was “impressed by the country’s socialist construction. In China, laws are made to support working people.”

Saffer and Webb both affirmed that relations between the CPUSA and the Chinese and Vietnamese parties “had been further strengthened, and they look forward to building even stronger relations in the future.”

However, nothing much actually happened for several years. What little activity there was mainly focused on studying the CCP’s economic model.

Wadhi’h Halabi, a Massachusetts academic who serves on the CPUSA Economics Commission, has made several visits to China since 2000, to lecture and attend conferences on “world political economy.”

On July 6, 2011, a forum entitled, “China, the Working Class, Unions and the Economy,” was held at the CPUSA-connected Niebyl-Proctor Marxist Library in Oakland, California. A description of the event read:

“China is now developing into the largest economy in the world and this forum will discuss how this affects Chinese working people, unions (official & independent) and the Chinese people. It will also look at how the U.S. government, U.S. unions and media look at this development.”

In a sign of communist rapprochement, Halabi spoke alongside David Ewing, of the San Francisco branch of the old Beijing line U.S.–China Peoples Friendship Association.

Six years later, on Oct. 14 and 15, 2017, Halabi and another Boston Communist Party member, Dylan Walker, participated in the Eighth World Socialism Forum of the Chinese Academy of Social Sciences in Beijing. The conference focused on the 100th anniversary of the October Revolution in Russia and “an examination” of the “temporal characteristics of the Great Transformation Era, and socialism with Chinese characteristics.”

Halabi, invited to address the forum, spoke on the topic, “What is the greatest honor we can pay the October Revolution?”

Halabi said, “The Great October Socialist Revolution was probably the single greatest step forward in human history. It strengthened Marxism and the working class. The Revolution gave birth to all Communist Parties worldwide, and to the Communist International.”

He continued: “It is true the Comintern suffered serious weaknesses, especially after Lenin’s death. … They are not reasons to reject unity among Communist Parties, but it is essential to identify why they developed and to address them. The greatest honor we can pay to the October Revolution is to rebuild international Communist unity.”

CPUSA’s Bachtell addressed “international communist unity” in his speech to the conference: “Marxism in the 21st Century and the Future for World Socialism,” sponsored by the CCP on May 28 in Shenzhen.

“We enthusiastically join in celebrating Karl Marx on the occasion of the 200th anniversary of his birth and express deep appreciation to the International Department of the Communist Party of China for hosting this event.”

“Marxism is the world’s most influential body of thought and has changed the course of human history. It is more relevant than ever for addressing humanity’s urgent challenges, despite the desperate efforts by the capitalist class to bury it.

“Only socialism can ultimately restore a harmonious relationship between society and nature and between humans and their labor. And the remarkable experience in China shows a socialist-oriented system makes the transition to sustainability on a massive scale possible.”

Bachtell went on to address the dangers posed to world peace by U.S. President Donald Trump and his administration: “The danger of authoritarianism and fascism has grown in the U.S. and Europe. Trump and the so-called alt-right, or fascists, linked to him pose an unprecedented threat to democracy, peace, and the environment,” he said.

“Trump is governing as he campaigned. … He deploys anti-China trade rhetoric to divide the working class domestically and pit U.S. workers against those of other countries.

“Trump has assembled a war cabinet whose members have the fantasy of restoring U.S. imperialism as the world’s sole superpower.

“Building a united front to defeat the extreme right’s domination of the U.S. government is an overarching strategic objective.”

Defeating the US ‘Right’

By Bachtell’s logic, the U.S. government is the major threat to world peace, while the CCP is a force for good. Therefore, the moral thing to do by communist standards is to defeat Trump and the U.S. “right.”

But what would the American communists do if things turned violent? What would they do if the United States got into a full-scale military confrontation with China?

An advertisement for a CPUSA reading group at the Niebyl-Proctor Marxist Library in Oakland on Dec. 4, 2010, answered the question this way:

“The United States government has been committing direct acts of provocation against China’s economy, and other aspects of its society, including its military. … If these confrontations are allowed to become full-blown, it … will demand from all of us new energies on yet another—perhaps the biggest—domestic front against U.S. Imperialism.”

Flush with wealth to lavish on its allies, and with rapidly growing military might, the CCP is clearly embarking on a new phase of the international revolutionary process. Reaching out to (and secretly funding) foreign communist parties will be a necessary part of this program.

Once the CPUSA would readily commit espionage and treason for Soviet money and praise. What crime will they not commit when the CCP money starts flowing into their bank accounts?