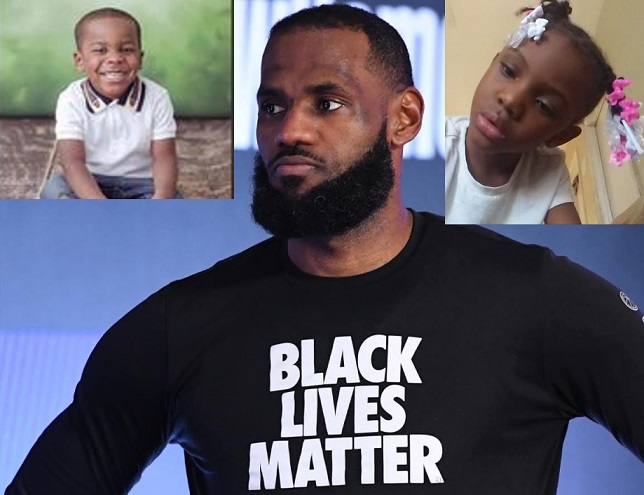 Their lives don’t matter to LeBron James, noted apologist for and profiteer from Chinese Communist genocide and repression of minorities, because they weren’t killed by a white cop but rather by black thugs or what Joe Biden once called “predators.” The NBA star, blessed with a massive physique and the ability to put a ball through a hoop with some regularity, has used the forum and the audience his stardom has bestowed on him only to condemn and target white cops who risk their lives to save black lives by shooting black criminals, while blithely and somewhat hypocritically ignoring the carnage that kills such innocent black lives.

LeBron, who no doubt has his own armed security in addition to what the NBA and its franchise cities provide for their fans, venues, and players, attacked and marked for assassination a Columbus, Ohio, cop who wasn’t “woke” enough to allow a black teen to murder another black teen and instead made the split-second decision to save the innocent black teen from an assault with a deadly weapon. As Fox News reported:

Bodycam footage released late Tuesday showed Bryant being shot as she was attacking another Black teen with a knife.

James suggested that the police shooting was unjustified coming on the heels of the conviction of former Minneapolis police Officer Derek Chauvin on murder and manslaughter charges in the death of George Floyd.

YOU’RE NEXT #ACCOUNTABILITY,” the NBA icon wrote with an hourglass emoji over an image of one of the officers at the scene of Bryant’s shooting. James was accused by critics of leveraging his massive Twitter following to target the officer.

“Lebron James is inciting violence against an Ohio police officer. This is disgraceful and dangerous. Is the NBA okay with this? Is Twitter?” Sen. Tom Cotton, R-Ark., asked.

“I’m so damn tired of seeing black people killed by police. I took the tweet down because it’s being used to create more hate – This isn’t about one officer. It’s about the entire system and they always use our words to create more racism. I am so desperate for more ACCOUNTABILITY.

Sorry, LeBron, but your own words condemn you.  Your tweet wasn’t misinterpreted or misused. You are the racist, condemning a white cop who saved a black teen’s life simply because of the color of his skin. It is this kind of black-on-black crime that plagues the African-American community and which he and Black Lives Matter routinely ignore. The next time your Lakers play the Bulls in Chicago LeBron, perhaps you can visit the grieving family of 7-year-old-Jaslyn Adams, gunned down by a gang-banger at a Chicago fast-food drive-through. As the New York Post reported:

A 7-year-old girl died and her father was wounded after they were shot at a McDonald’s drive-thru in Chicago on Sunday, a report said.

The child, identified by police as Jaslyn, and her 28-year-old dad, Jontae Adams, were in a car outside the fast-food restaurant in the city’s Homan Square neighborhood when two gunmen opened fire on them, the Chicago Sun-Times reported, citing police and a worker.

Jaslyn was struck several times in the shooting at about 4:20 p.m. She was taken to Stroger Hospital, but could not be saved, the newspaper reported.

Her father was hit in the torso and hospitalized in stable condition.

A McDonald’s worker told the publication that two people exited a gray car and began shooting at Adams’ vehicle.

No arrests have been made. Police believe the violence may be gang-related, the report said. 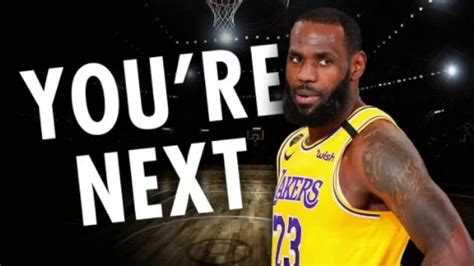 Since that report, two black males,  Demond Goudy, 20, and Marion Lewis, 18, have been arrested by police for Jasslyn’s murder. The first item of note is that in most news accounts neither suspect is identified as African-American. If they were white church-goers it would be headlined and you could measure the reaction on the Richter Scale. And just suppose a white cop had encountered either or both of these fine young gentlemen in a Chicago alley and shot them thinking they had a gun. A second Chicago fire would have resulted.

One of the two suspects was out on bail, but does LeBron care? As the Chicago Tribune reports:

One of two shooters opened fire “not once but twice” at a car in a McDonald’s drive-thru, killing 7-year-old Jaslyn Adams and wounding her father on the West Side earlier this month, prosecutors said Friday.

Demond Goudy, 21, who was on bond for four separate felony cases at the time of the shootings, appeared before Cook County Judge David Navarro, who denied bail during a lengthy hearing audio streamed live on YouTube.

Demond Goudy, 21, who was on bond for four separate felony cases at the time of the shootings, appeared before Cook County Judge David Navarro, who denied bail during a lengthy hearing audio streamed live on YouTube. 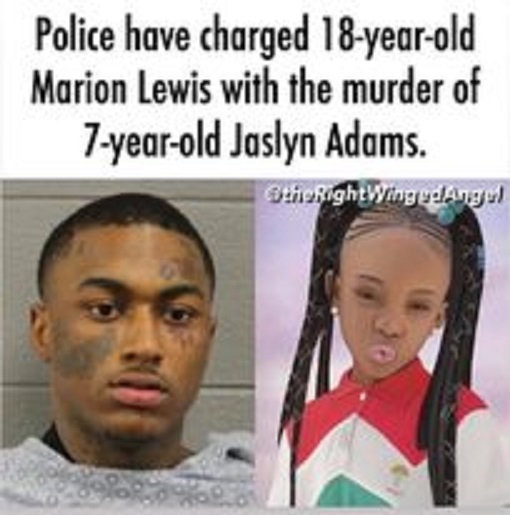 Say what? A gang-banger with four felony warrants is allowed to roam Chicago streets and kill black children? Where is LeBron James? Where is Black Lives Matter? And it was gang-related, LeBron, gang-related.  No white cops were involved, except for those who respond to the black-on-black gang crime in cities like Chicago. Nor were there any vigils, no riots, no visits by Al Sharpton, or any pompous racist tweets by NBA stars who must have their jockstrap on too tight.

Nor was LeBron concerned about the murder by a black gang-banging thug of 3-year-old Elijah LaFrance at his birthday party. As Fox News reported:

A three-year-old boy was shot and killed at a birthday party in Florida Saturday evening, authorities said.

Officers responded to a ShotSpotter alert at a residence in Miami-Dade County and found the boy, Elijah LaFrance, suffering from an apparent gunshot wound, according to a statement by the Miami-Dade Police Department. LaFrance was rushed to an area hospital, where he died from his injuries….

The property was an Airbnb rental, which was booked to host the party, according to WFOR-TV. The station reported that the shooting occurred following an altercation outside the residence. 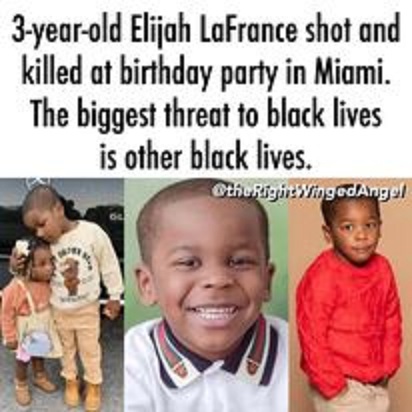 Contrary to the lies coming from LeBron James and his “woke” progressive friends, blacks are not being hunted down and killed by cops in a systemically racist America. They are being killed by other blacks, often young men raised without fathers. Ironically, one of the founding dogmas of Black Lives Matter is the destruction of the nuclear family. Does LeBron support that? Like most leftists, LeBron prefers not to deal with the systemic societal rot caused by urban blacks trapped in Democratic-run urban plantations.

Not only are the cops not waging war on black America but it is the war on cops waged by LeBron and others that has increased the body count in our nation’s cities. Cops have decided in large numbers that enforcing the law in high-crime areas is simply not worth it and are retiring, pulling back, or not becoming cops in the first place. As Heather Macdonald of the Manhattan Institute noted, the falsehoods on this subject have grown so pervasive that it is black lies that matter more. According to MacDonald, who has looked at the facts and crunched the numbers:

Heather MacDonald is the author of “The War on Cops” and “The Diversity Delusion”. After the initial Ferguson Riots and the birth of the “Black Lives Matter” movement, she coined the term “Ferguson Effect” to describe the deadly effect BLM and de-policing have on vulnerable minority communities. Since the George Floyd riots, the murder rates in US cities have spiked an average of 30%. Gateway Pundit spoke to Heather MacDonald about the Derek Chauvin trial and what it will mean for the US in the future….

The “Ferguson Effect” refers to the twin phenomena of officers backing off from discretionary proactive enforcement under the accusation that such enforcement is racist, and the resulting emboldening of criminals.  The first iteration of the Ferguson Effect in 2015 and 2016, following the police shooting of Michael Brown in Ferguson, Missouri in 2014, led to the largest two-year increase in homicides in 50 years. Another 2000 blacks died of homicide over those two years compared to the benchmark of 2014.

The George Floyd Effect dwarfs anything seen so far.  2020 saw the largest percentage increase in homicides in U.S. history.  Over 2000 more blacks have been killed in drive-by shootings in 2020 compared to the already high benchmark of 2019.  When final tallies come in, there will likely have been about 8500 black homicide victims in 2020, more than all white and Hispanic homicide victims combined, even though blacks are only 12% of the U.S. population.

Four dozen black children were gunned down fatally in 2020 in their beds, living rooms, and front porches; at birthday parties and barbecues; while sitting in their parents’ car. Not a single one of those child victims drew a protest from Black Lives Matter activists because their killers were all black. Likewise, the vast majority of black adult homicide victims are killed by other blacks, which is why they are ignored by the media and by left-wing politicians.

The police could end all fatal shootings tomorrow and it would have a negligible impact on the black death by homicide rate. Every year the police kill about 1000 people, the vast majority of whom are armed and dangerous. Whites make up about 50% of those police-shooting victims; blacks about 23-25%–again, almost all those police-shooting victims posing a violent threat to the officer or to bystanders. In 2020, the police fatally shot 18 allegedly “unarmed” blacks (and 24 “unarmed” whites)—unarmed being defined liberally to include suspects grabbing the officer’s gun or fleeing in a stolen car with a loaded revolver on the seat next to them.  Those 18 “unarmed” blacks make up .2% of black homicide victims in 2020, and a percentage of the 40 million black US population too small to calculate.

There you have it LeBron, the game stats from the game you and others have been playing. None of you care about the black lives of Elijah Lafrance and Jaslyn Adams and what and who is killing them.