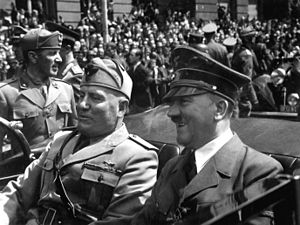 Numerous commentators have raised alarming comparisons between America’s recent economic foibles and Argentina’s fall “from breadbasket to basket case.” The U.S. pursues a similar path with her economy increasingly ensnared under the growing nexus of government control. Resources are redistributed for vote-buying welfare schemes, patronage style earmarks, and graft by unelected bureaucrats, quid pro quo with unions, issue groups and legions of lobbyists.

In the Thirties, intellectuals smitten by progressivism considered limited, constitutional governance anachronistic. The Great Depression had apparently proven capitalism defunct. The remaining choice had narrowed between communism and fascism. Hitler was about an inch to the right of Stalin. Western intellectuals infatuated with Marxism thus associated fascism with the Right.

Later, Marxists from the Frankfurt School popularized this prevailing sentiment. Theodor Adorno in The Authoritarian Personality devised the “F” scale to demean conservatives as latent fascists. The label “fascist” has subsequently meant anyone liberals seek to ostracize or discredit.

Fascism is an amorphous ideology mobilizing an entire nation (Mussolini, Franco and Peron) or race (Hitler) for a common purpose. Leaders of industry, science, education, the arts and politics combine to shepherd society in an all encompassing quest. Hitler’s premise was a pure Aryan Germany capable of dominating Europe.

While he feinted right, Hitler and Stalin were natural bedfellows. Hitler mimicked Lenin’s path to totalitarian tyranny, parlaying crises into power. Nazis despised Marxists not over ideology, but because they had betrayed Germany in World War I and Nazis found it unconscionable that German communists yielded fealty to Slavs in Moscow.

Where communists generally focused on class, Nazis fixated on race. Communists view life through the prism of a perpetual workers’ revolution. National Socialists used race as a metaphor to justify their nation’s engagement in an existential struggle.

As many have observed, substituting “Jews” for “capitalists” exposes strikingly similar thinking. But communists frequently hated Jews too and Hitler also abhorred capitalists, or “plutocrats” in Nazi speak. From afar, Soviet Russia and Nazi Germany each reeked of plutocratic oligarchy. Both were false utilitarian Utopias that in practice merely empowered dictators.

The National Socialist German Workers Party is only Right if you are hopelessly Left. Or, ascribe to Marxist eschatology perceiving that history marches relentlessly towards the final implementation of socialist Utopia. Marx predicted state capitalism as the last desperate redoubt against the inevitable rise of the proletariat. The Soviets thus saw Nazis as segues to communism.

As usual, Marx got it backwards.

It’s also ironic that even as orthodox Marxism collapsed due to economic paralysis, cultural Marxism predicated on race, sex and identity politics thrives in “Capitalist” America. The multiculturalists substituted race where the Soviets and Maoists saw only class. America’s civic crusade has become political correctness, aka cultural Marxism, preoccupied with race. Socialism wheels around again.

While political correctness as manifest in the West is very anti-Nazi and those opposing multiculturalism primarily populate the Right, it’s false to confuse fascism with conservatism. Coupling negatives is not necessarily positive. Because the Nazis would likely detest something that conservatives also dislike indicates little harmony. Ohio State hates Michigan. Notre Dame does too, but Irish fans rarely root for the Buckeyes.

America’s most fascistic elements are ultra leftwing organizations like La Raza or the Congressional Black Caucus. These racial nationalists seek gain not through merit, but through the attainment of government privileges. What’s the difference between segregation and affirmative action? They are identical phenomena harnessing state auspices to impose racialist dogma.

The Nation of Islam and other Afrocentric movements, like the Nazis, even celebrate their own perverse racist mythology. Are Louis Farrakhan and Jeremiah Wright conservatives? Is Obama?

The Nazis’ anti-Semitism derived indirectly from Karl Marx, who despite Jewish ancestry was deeply anti-Semitic. Bankers and other capitalists were disproportionately Jewish. Elsewhere, Jews played prominent roles. Before falling under Hitler’s sway, Mussolini’s inner circle was overly Jewish. Peron was the first leader to let Jews hold public office in Argentina. Franco, a Marana, welcomed Jews back into Spain for the first time since 1492 and famously thwarted Hitler by harboring Jewish refugees.

Despite Democrats’ pretensions every election, patriotism is clearly a conservative trait so Nazi foreign policy could be vaguely right wing, but how did Hitler’s aggression differ from Stalin’s? The peace movement evidenced liberals being duped as “useful idiots” more than pacifistic purity. Note the Left’s insistence on neutrality during the Hitler/Stalin pact and their urgent switch to militarism once Germany attacked.

After assuming power, Nazis strongly advocated “law and order.” Previously, they were antagonistic thugs, which mirrored the communists’ ascension. The Nazis outlawed unions perceiving them as competitors for labor’s loyalties, i.e. for precisely the same reason workers’ paradises like Communist China and Soviet Russia disallowed unions. To Nazis, the state sustained workers’ needs.

Even issues revealing similarity to American conservatism could also describe Stalin, Mao and many communists. This is not to suggest liberals and fascists are indistinguishable, but a fair assessment clearly shows if any similarities appear with American politics they reside more on the Left than Right.

On many issues the Nazis align quite agreeably with liberals. The Nazis enforced strict gun control, which made their agenda possible and highlights the necessity of an armed populace.

The Nazis separated church and state to marginalize religion’s influence. Hitler despised biblical morality and bourgeois (middle class) values. Crosses were ripped from the public square in favor of swastikas. Prayer in school was abolished and worship confined to churches. Church youth groups were forcibly absorbed into the Hitler Youth.

Hitler extolled public education, even banning private schools and instituting “a fundamental reconstruction of our whole national education program” controlled by Berlin. Similar to liberals’ cradle to career ideal, the Nazis established state administered early childhood development programs; “The comprehension of the concept of the State must be striven for by the school as early as the beginning of understanding.”

Foreshadowing Michelle Obama, “The State is to care for elevating national health.” Nanny State intrusions reflect that persons are not sovereign, but belong to the state. Hitler even sought to outlaw meat after the war; blaming Germany’s health problems on the capitalist (i.e. Jewish) food industry. The Nazis idealized public service and smothered private charity with public programs.

Hitler’s election platform included “an expansion on a large scale of old age welfare.” Nazi propaganda proclaimed, “No one shall go hungry! No one shall be cold!” Germany had universal healthcare and demanded that “the state be charged first with providing the opportunity for a livelihood.” Obama would relish such a “jobs” program.

Nazi Germany was the fullest culmination of Margaret Sanger’s eugenic vision. She was the founder of Planned Parenthood, which changed its name from the American Birth Control Society after the holocaust surfaced. Although Nazi eugenics clearly differed from liberals’ abortion arguments today, that wasn’t necessarily true for their progressive forbears.

National Socialist economics were socialist, obviously, imposing top-down economic planning and social engineering. It was predicated on volkisch populism combining a Malthusian struggle for existence with a fetish for the “organic.” Like most socialists, wealth was thought static and “the common good supersede[d] the private good” in a Darwinist search for “applied biology” to boost greater Germany.

The Nazis distrusted markets and abused property rights, even advocating “confiscation of war profits” and “nationalization of associated industries.” Their platform demanded, “Communalization of the great warehouses” (department stores) and presaging modern set aside quotas on account of race or politics, “utmost consideration of all small firms in contracts with the State.”

Nazi Germany progressively dominated her economy. Although many businesses were nominally private, the state determined what was produced in what quantities and at what prices. First, they unleashed massive inflation to finance their prolific spending on public works, welfare and military rearmament. They then enforced price and wage controls to mask currency debasement’s harmful impact. This spawned shortages as it must, so Berlin imposed rationing. When that failed, Albert Speer assumed complete power over production schedules, distribution channels and allowable profits.

Working for personal ends instead of the collective was as criminal in Nazi Germany as Soviet Russia. Norman Thomas, quadrennial Socialist Party presidential candidate, saw the correlation clearly, “both the communist and fascist revolutions definitely abolished laissez-faire capitalism in favor of one or another kind and degree of state capitalism. . . In no way was Hitler the tool of big business. He was its lenient master. So was Mussolini except that he was weaker.”

Mussolini recognized, “Fascism entirely agrees with Mr. Maynard Keynes, despite the latter’s prominent position as a Liberal. In fact, Mr. Keynes’ excellent little book, The End of Laissez-Faire (l926) might, so far as it goes, serve as a useful introduction to fascist economics.” Keynes saw the similarities too, admitting his theories, “can be much easier adapted to the conditions of a totalitarian state than . . . a large degree of laissez-faire.” Hitler built the autobahn, FDR the TVA. Propaganda notwithstanding, neither rejuvenated their economies.

FDR admired Mussolini because “the trains ran on time” and Stalin’s five year plans, but was jealous of Hitler whose economic tinkering appeared more successful than the New Deal. America wasn’t ready for FDR’s blatantly fascist Blue Eagle business model and the Supreme Court overturned several other socialist designs. The greatest dissimilarity between FDR and fascists was he enjoyed less success transforming society because the Constitution obstructed him.

Even using Republicans as proxies, there was little remotely conservative about fascism. Hitler and Mussolini were probably to the right of our left-leaning media and education establishments, but labeling Tea Partiers as fascists doesn’t indict the Right. It indicts those declaring so as radically Left.