MINNEAPOLIS, MN (April 8, 2010) – A broad coalition of national and regional Tea Party groups have announced the formation of the National Tea Party Federation (NTPF). The NTPF is established to create a unified message and media response amongst key leadership and their affiliates. At the same time, the NTPF will act as a clearinghouse and to promote the Tea Party movement’s objectives of:

The federation includes key organizations and leadership and is committed to changing the dynamics of communicating clearly to its membership while supporting the aforementioned principles. The approach will allow for clarity of message, rapid response to media misinformation while continuing to build the brand equity of the Tea Party movement. The NTPF will act in unison without a central leadership or overhead yet collaborate through a common set of principles.

The founders of the National Tea Party Federation include the following Tea Party groups:

The National Tea Party Federation is comprised of national, regional and local leadership that has worked to build trust amongst the various parties. The founding members will work to encourage other groups and leadership to join the federation thereby extending its impact and capabilities.

Jamie Radtke, further commented, “We have experienced the attempts to suggest that Tea Party members are not part of America’s mainstream. As a mother, I have made my best efforts to raise my voice to oppose the actions of this government for the benefit of my family, community and my country. We and the Virginia Tea Party Federation welcome this effort and the national exposure it will give our movement and our members.”

NTPF has also established alliances which include like-minded advocacy and support groups such as:

Mark A. Skoda of The Memphis Tea Party commented, “The combination of the Tea Party leadership and a strong network of alliances brings together activists with the resources to get our message out while coordinating across these many groups. The talent, experience and results orientation of the National Tea Party Federation is unprecedented in the current political environment.”

Amy Kremer, of American Grass Roots Coalition and a Director of TEA Party Express, commented, “As a woman and mother, my concerns for the country revolve around our message of smaller government and accountability. The NTPF provides a way in which we can coordinate our efforts nationally and respond to the antagonism of the Left through the media and hold them accountable to responsible reporting.”

Grass roots activists everywhere have worked to inform themselves, notify their representatives of their objections and take action in the form of rallies, meetings and calls into those representatives. Individual groups have worked tirelessly to assemble their members and deliver their comments to their elected legislators. However, the formation of the National Tea Party Federation will allow for a “clearinghouse” of messaging, media comment, local video and documentation while at the same time aligning the affiliates in “one message, one face.”

Skoda, further stated, “The Tea Party movement’s favorability is at an all time high of fifty-two percent. The extraordinary efforts, put forward by common citizens to make their voices heard, will now have a federation capable of national communication.”

Darla Dewald of ResistNet also commented, “The power of this federation is extraordinary. The leadership and advisors who have chosen to affiliate within the National Tea Party Federation are key activists with the capability to deliver a clear message while also working with their membership to achieve change.”

Maggie Hunt of the Santee East County Tea Party stated, “This federation, much like the United States itself, is a combination of large Tea Party organizations and smaller local groups. We are so please to play our part and to participate in this important effort. The time to align our messaging is now and the National Tea Party Federation will give voice to many more in the Tea Party movement.”

Dozens of other Tea Party leadership and affiliates have been invited into the National Tea Party Federation and are working through their review processes. The NTPF is an open federation and welcomes all Tea Party groups and affiliates who are committed to the core principles of fiscal responsibility, constitutionally limited government and free markets.

For further information or to register and participate in the National Tea Party Federation, please visit our website at www.thenationalteapartyfederation.com. 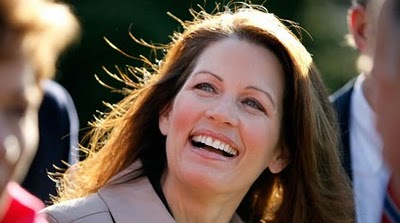 Minnesota congresswoman Michele Bachmann will be the featured speaker today at the 9:30 am Minneapolis TPX rally. Prior to the rally, Andrea Shea King will be attending a 9:00 am Bachmann press conference. Watch for coverage of both events at her site — The Radio Patriot — throughout the day. 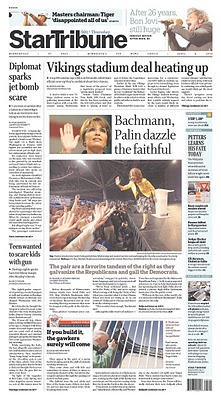 MELANIE MORGAN is right where she belongs: the front seat of the TPX Blue Bus. Melanie was a featured speaker at the kickoff of this TPX tour at Searchlight, Nevada, generously assisting Harry Reid plan for his upcoming retirement. All along the tour, Melanie has been keeping her readers up-to-date on TPX tour rallies, and we can’t thank her enough for the coverage.

Co-author of the book, American Mourning, Melanie is an important part of what this tour is all about, because when she sinks her teeth into a political movement, she leaves a mark. Just ask former California Governor Gray Davis. 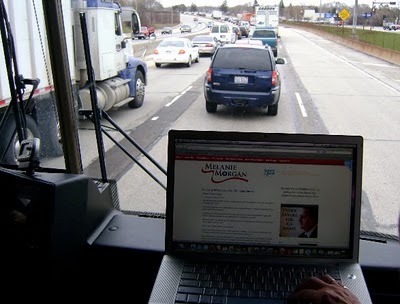 Andrea has amazing coverage of the yesterday’s TPX rally held in Eau Claire, WI, as well as a report on the IRS’ assessment of the Tea Party. Seems we’re not a threat, after all.

Marathon Pundit is reporting on today’s tour stops, and Noisyroom has coverage throughout the day.

For the last several months I’ve been working on a ground-breaking new project. 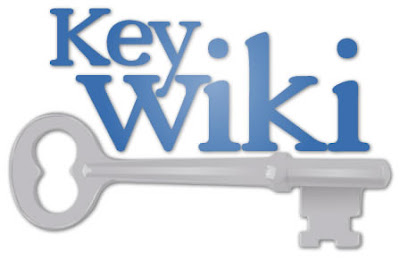 Together with a growing team we’ve created KeyWiki – a look at the covert side of politics.

At this stage KeyWiki is focusing primarily on the left in the United States.

We’ve started profiles on over 35,000 US people and organizations from the Democratic Socialists of America to the Center for American Progress, and from President Barack Obama to street level cadre communists.

In short, all the people who are dragging America down.

Most of the profiles are “stubs”, but an increasing number are comprehensive and a few run to several pages.

We hope our ever-expanding KeyWiki will prove a very helpful resource for those fighting to restore the great American republic.

To check us out, visit KeyWiki.org

Go to search at the top left of the page and type in the name of your favorite US leftist. Press GO. Capitalization and correct spelling are crucial. If you don’t find the name you’re looking for immediately, type in a surname or keyword and press SEARCH.

If you’re a bit of a radical yourself, see if we have YOUR name on file. If for some bizarre reason we have not got a profile on you yet, please use the contact form to send us your details and a recent photograph.

I’ll be posting more on KeyWiki in the next few days.