By: RBT
Ron the Cop

As I just released to members of the local media, this blockage of emails by Spokane PD has a very chilling effect.

My email to Spokane City Clerk Terri Pfister is self-explanatory. As members of the press/media who are dependent on the transparency of government – re filing PDRs, I would think this would be of interest to you and your readers/viewers.

Yes, we are receiving your emails. As to the systems breakdown, you’ll be getting a more formal response from the City’s Attorney’s Office.

The emails that underlay KREM2’s “Cage Fight“ investigative report were very illuminating in decisions that were made by police administrators and the County Prosecutor’s Office in the Creach OIS. If the City is free to block emails at the whim of City administrators, this begs the question of whether other emails messages within the City have been compromised.

Update: An email that just came in…

The below email record can be freely attributed to me with my links to references/sources.

As members of the press that have been following the Creach OIS investigation, I would think you would have an interest in these developments to inform your viewers and readers. In other media markets there would be a media feeding frenzy.

What is the reluctance to cover this story? Is it because you don’t won’t to offend the power elite in this town as I and others have alleged in fear of retribution/realization because of potential business and ad revenue losses? If so your shirking in your responsibility to the citizens of Spokane.

If what I’ve said is wrong or in error in anyway as Mr. Shook has said, please let me know and I will immediately correct/apologize for my mistake/error.

Further why is the local media so willing to give Steve Tucker a pass and wide birth on these issues. Perhaps as my sources tell me some investigative reporting is in order to see how he spends his day. I don’t think the citizens of the City and County of Spokane are getting their money’s worth.

END_OF_DOCUMENT_TOKEN_TO_BE_REPLACED 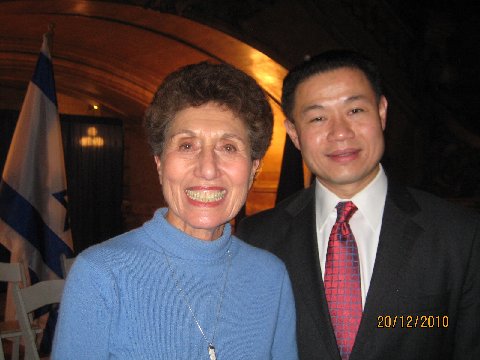 An overflow crowd gathered in the cavernous lobby of the stately New York Surrogate Courthouse in lower Manhattan on Monday evening December 20th for a moving evening dedicated to the majestic heritage of the Jewish nation. Sponsored by the Agudath Israel, the Jewish Community Relations Council (JCRC), the Met Council on Jewish Poverty and the UJA-Federation of New York, the Jewish Heritage celebration was the brainchild of New York City Comptroller John C. Liu, a native of Taiwan, who was the chief organizer of the event.

“I not only consider myself a friend to the Jewish community, but one who developed a true appreciation and understanding of the rich cultural and religious traditions of this timeless and eternal nation,” said Mr. Liu. In his introductory remarks, Mr. Liu mentioned that he had just returned from his second trip to Israel and found it to be “a most magnificent experience in every way” and extended his thanks to the Jewish Community Relations Council for sponsoring this trip and his previous trip which took place in 1999. “I was extremely honored to visit Israel for the first time, along with Dr. Ruth Westheimer, who had lived in Israel after World War II.”

Mr. Liu made reference to his participation in Chanukah menorah lighting ceremonies and his introduction to eating Hamantaschen on Purim. “Being a part of these traditions is very important to me and I salute the Jewish people for not only representing a beacon of light and hope to the world but for teaching the world the true meaning of freedom, democracy and liberty.”

Quoting the late David Ben Gurion, the first prime minister of Israel, Ido Aharoni, Consul General of Israel in New York, said, “Being a realist in Israel means that you must believe in miracles. Our very existence as a people since the dawn of time has been solely dependent of the mercy and compassion of the G-d of Israel and tonight we celebrate the heritage that we clung to and sacrificed for throughout the millennium.” Mr. Aharoni praised John Liu as being “a courageous bridge between Israel and New York City.”

Helen Freedman of the Americans For A Safe Israel said in an interview that, “It is wonderful to see so many supporters of Israel and the Jewish people gathered here tonight. As the nation of Israel faces the most difficult and challenging times, we are deeply indebted to people like John Liu and other non-Jewish friends and allies.”

Among those honored at Jewish Heritage of New York were Anna Rachmansky, the president of the Shorefront YMHA of Brighton Beach. Ms. Rachmansky arrived in the United States 30 years ago from the former Soviet Union and has dedicated her efforts towards creating a wide variety of social service programs that assist the Russian-Jewish community. She is also the chairperson of the Russian leadership division of the UJA-Federation on New York and recently delivered remarks at “The Wall Street Dinner,” a premiere UJA fundraising event. She also works closely with the Jewish Community Relations Council.

“We must never forget that there are those out there who struggle with hunger and poverty on a daily basis,” declared Alexander Rapaport, who was honored for operating soup kitchens in the Borough Park section of Brooklyn. With the invaluable assistance of the Met Council on Jewish Poverty, Mr. Rapaport serves over 500 meals every day to those in need.

Praised for his work of saving Jewish lives 365 days a year through his work with Hatzolah, was honoree Rabbi David Cohen. Hatzolah, as an organization, is the largest volunteer ambulance service in the world. Chevra Hatzolah in New York has more than a thousand volunteer EMTs and paramedics who answer more than 250,000 calls each year with private vehicles and a fleet of more than 70 ambulances. Hatzolah members were among the first responders to the World Trade Center on September 11, 2001 and alongside other rescue workers, Hatzolah volunteers risked their lives to rescue, treat and transport countless victims of the terrorist attack.In the process they earned great respect from their peers in the emergency service community.

Deborah Hes, the executive director of the Jewish Community Center of Washington Heights was honored for her diligent efforts in helping Russian Jews integrate into the complex network of the New York City community. Also being honored was Steven Goodman for his four decades of Jewish communal service through his work the YMHA system of programs that help the less fortunate.