After recent exposes of appalling behavior by Planned Parenthood staff, a friend made this succinct little video.

Looking to 2012, some Republican Presidential contenders are reasonably strong on national security, some on economics. Very few are strong on both.

Though he has said he will not run, freshman Florida Congressman Allen West is an obvious exception.

Lt. Colonel West’s national security credentials are beyond question. He has extensive ‘in the field’ military experience and has an encyclopedic knowledge of military history and the character of radical Islam. He understands the external threats facing America and is very forthright in addressing them.

Also West understands the U.S. Constitution and the economic system it implies – the free market.

Initially, I agreed with West’s decision not to run in 2012. However, the more I see of the man, the more I hope he will re-consider.

The important question is – how will America be then? 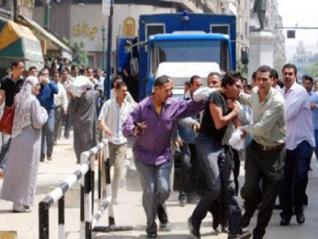 Voice of the Copts’ representative in Egypt, attorney Ashraf Edward, relayed the following information from Cairo, which has unfolded over the past two days:

On January 27th, Egyptian law enforcement and special police under Mubarak’s control went into Al-Fyom prison, 50 miles north of Cairo, and ordered all prisoners to change from prison uniform into civilian clothing and board a bus prepared to take them to Cairo with the express purpose of countering protesters and creating disorder in the streets.

The majority followed these orders and went to Cairo while some refused (168 in total) and were left to submit to military police who returned them to the prison. Mubarak’s special police then killed all prisoners and also killed the head prison guard along with two of his officer assistants.

Their bodies were recently discovered in the autopsy room of a hospital in Cairo. Many were found to have been burned with gas and treated with electric shock, and some had fingernails missing.

A thirty-nine year old prisoner was killed by a shot to his head, according to an Egyptian Secret Service agent who was an eyewitness. The inmate had been waiting for his father to arrive at the prison with borrowed money to pay his bond of 100 Egyptian pounds (thirty dollars) so he could be released.

We are waiting for additional information from the same source in Cairo.

“Take a look at me.You think I’m sleeping on a cot? It’s not happening.”

Wisconsin, Ohio and now I’m hearing it is happening in Indiana as well.

The Jawa Report is being sued and is under attack. Please, if you can at all, go to their site and donate. This could happen to any of us and the Jawas do so much good work in exposing evil out there. Thanks!

Read all about the suit here…

One to watch is Fiona Tregenna, a University of Johannesburg economics lecturer.

Fiona Tregenna is currently working on her Ph.D. in Economics at the University of Cambridge. She holds degrees from the Universities of Massachusetts (Amherst), Witwatersrand and Natal. Her main areas of interest are macroeconomics and political economy. She worked for the Congress of South African Trade Unions as well as previously for its research institute, the National Labor and Economic Development Institute, doing research, policy and political work. She has also taught courses at the Universities of the Witwatersrand and Massachusetts. Ms. Tregenna has published various working papers, book chapters, articles and policy documents.

Will Tregenna become a future African National Congress Member of Parliament, high ranking South African government official or international bureaucrat? She will almost certainly become one or all of the above.