From The Daily Beck…

I posted here on an upcoming national activist “teach-in” on “Debt, Austerity and Corporate Greed” being organized by Democratic Socialists of America leaders Frances Fox Piven and Cornel West. 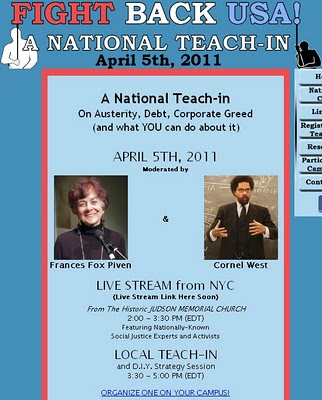 D.S.A. and its youth wing, Young Democratic Socialists, and their various fronts are getting right behind the event:

To join that movement and escalate the activism planned in the days, weeks and months ahead we are organizing a “National Teach-in on Debt, Austerity and How People Are Fighting Back…”

More than one hundred campuses have signed up to participate in the teach in. Scheduled for April 5th at 2 p.m. (Eastern Daylight Savings Time), the event seeks to counter the drumbeat of right-wing propaganda. Content will be streamed live to teach-ins organized in local communities from the national teach-in at Judson Memorial Church in New York City. The local teach-ins will use the streamed material and add their own speakers that focus on their community. DSA has endorsed this program and is encouraging local groups and YDS chapters to organize local events that connect to the national teach-in. Jobs with Justice, the Student Labor Labor Project, and others are promoting the teach-in…

Now we learn that three other prominent activists will join the “teach-in.”

This is a big deal.

Five of the most influential socialists in the country are inciting thousands of young college age activists to take to the streets of America.

The same people who gave us Egypt and Libya…

Tell me again what the definition of insanity is? Or is it treason? Hmmm…. Charge!!!

Another great song from my buddy Chris Ross.