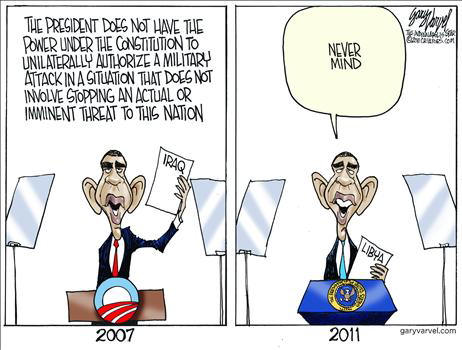 Barack Obama basically stomped on the War Powers Act last week in a hissy fit proclaiming that it did not apply to his Libyan kinetic military action.

Showing clear disdain for the Act and America in general, Obama claimed that it was not applicable since the Libyan debacle was not actually a full-blown war. Under the War Powers Act, the President has 60 days to get authorization from Congress for any military involvement, and if he fails to get that authorization, he must end the involvement within 30 days. The 60-day authorization period expired on Friday the 20th. He penned a letter to Congress saying that the role of the US in the conflict was so limited that he does not need to seek congressional approval.

In a blatant act of Obama’s word smithing, ABC News reports the following:

“Since April 4,” the president wrote, “U.S. participation has consisted of: (1) non-kinetic support to the NATO-led operation, including intelligence, logistical support, and search and rescue assistance; (2) aircraft that have assisted in the suppression and destruction of air defenses in support of the no-fly zone; and (3) since April 23, precision strikes by unmanned aerial vehicles against a limited set of clearly defined targets in support of the NATO-led coalition’s efforts.”

A senior administration official told ABC News that the letter is intended to describe “a narrow US effort that is intermittent and principally an effort to support the ongoing NATO-led and UN-authorized civilian support mission and no fly zone.”

“The US role is one of support,” the official said, “and the kinetic pieces of that are intermittent.”

Bovine excrement. From the beginning of Obama’s invoking the Responsibility to Protect Doctrine, the Obama administration has cited the 1973 War Powers Act as the legal basis of its ability to conduct military activities for 60 days without first seeking a declaration of war from Congress. Now he disowns the Act and in typical forked tongue fashion, he utilizes the War Powers Act and then dismisses it when it is no longer pertinent to his agenda. You know, sort of like the way he views our Constitution.

“In no part of the constitution is more wisdom to be found,” James Madison wrote, “than in the clause which confides the question of war or peace to the legislature, and not to the executive department.”

The Libyan debacle was never voted on because Obama knew it would never be passed. Libya was not a current threat to the US. I contend it was a dry run to see how Responsibility to Protect would play out if used in other actions. Such as, just being hypothetical here, Israel.

An interesting note from Floyd Reports:

From the days of the Founders until recent decades, no significant U.S. military action took place apart from Congressional authorization. A look at the history of U.S. interventions abroad taken without Congressional approval shows most actions were taken in self-defense or as an immediate response to a foreign attack upon U.S. interests. The War Powers Resolution may be unconstitutional because it allows the president to initiate war for 60 days.

Even assuming the act is constitutional, it is dubious that Obama had the authority to commit troops to battle. Its provisions specifically limit when the president may send our soldiers into “hostilities”:

The constitutional powers of the President as Commander-in-Chief to introduce United States Armed Forces into hostilities, or into situations where imminent involvement in hostilities is clearly indicated by the circumstances, are exercised only pursuant to

(3) a national emergency created by attack upon the United States, its territories or possessions, or its armed forces. (Emphasis added.)

Intervening in Libya’s civil war meets none of these criteria.

Obama is getting more and more brazen in his actions. He is ruling by executive orders, regulation and decree and not by the Constitution and the laws that the rest of us honor and follow. There are a number of lawmakers who are now demanding answers, but they will not be listened to by Obama. And in Obama’s usual two step mode, he may play legal games to get around the War Powers Act:

But the Obama administration, which cited the War Powers Resolution when it authorized the action in Libya, may be taking precautions.

Kucinich, though, said doing so would merely be a “legal loophole.” He suggested the administration would still be in violation of the law “as it was intended.”

John Yoo, a former Bush administration attorney who played a key role in drafting its interrogation policies, and Robert Delahunty, a fellow Bush Justice Department official, wrote in a Wall Street Journal column Friday that these tactics would not count as a “fair, honest reading of the War Powers Resolution.”

A great comment from Gateway Pundit from American Patriot puts this in light of what Abraham Lincoln said:

“Allow the President to invade a neighboring nation whenever he shall deem it necessary to repel an invasion, and you allow him to do so whenever he may choose to say he deems it necessary for such purpose, and you allow him to make war at pleasure. Study to see if you can fix any limit to his power in this respect, after having given him so much as you propose. If to-day he should choose to say he thinks it necessary to invade Canada to prevent the British from invading us, how could you stop him? You may say to him, — ‘I see no probability of the British invading us;’ but he will say to you, ‘Be silent: I see it, if you don’t.’

“The provision of the Constitution giving the war making power to Congress was dictated, as I understand it, by the following reasons: Kings had always been involving and impoverishing their people in wars, pretending generally, if not always, that the good of the people was the object. This our convention understood to be the most oppressive of all kingly oppressions, and they resolved to so frame the Constitution that no one man should hold the power of bringing this oppression upon us. But your view destroys the whole matter, and places our President where kings have always stood.”

Obama would be king evidently and use our military might at his pleasure. After the fashion of any good pretender to the throne, he takes council from his advisors, ‘the Congress,’ until that advice no longer suits his purpose. Whereupon he bids them silent, that he may pursue his “clearer” vision. Congress after all should hold its tongue if it can’t satisfy its master’s wishes. Waging war by decree, in Obama’s view, is his right as the most powerful ruler in the world. The Congress is just window dressing and the American people are just riffraff who don’t know what is best for them. Better to leave that to the ruling elite who are wiser and more capable to decide who lives and who dies and what borders are appropriate.

5 thoughts on “Waging War by Decree”