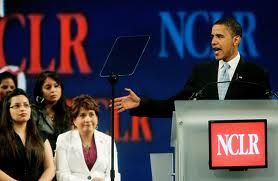 The White House has confirmed that President Barack Obama will speak at the 2011 NCLR (National Council of La Raza) Annual Conference, NCLR President and CEO Janet Murguía announced today. The NCLR Annual Conference and National Latino Family Expo, the single largest national Latino event of the year, will be held in Washington, D.C., July 23–26, at the Washington Marriott Wardman Park Hotel. More than 25,000 participants are expected to attend the four-day event.

If you aren’t aware of the goals and vision of La Raza, we find this explanation in a rather odd place. Posted by Aztlan Power.

From the John McCain supporters forum: 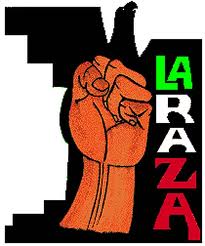 1. UNITY in the thinking of our people concerning the barrios, the pueblo, the campo, the land, the poor, the middle class, the professional -all committed to the liberation of La Raza.

2. ECONOMY: economic control of our lives and our communities can only come about by driving the exploiter out of our communities, ourpueblos, and our lands and by controlling and developing our own talents, sweat, and resources. Cultural background and values which ignore materialism and embrace humanism will contribute to the act of cooperative buying and the distribution of resources and production to sustain an economic base for healthy growth and development Lands rightfully ours will be fought for and defended. Land and realty ownership will be acquired by the community for the people’s welfare. Economic ties of responsibility must be secured by nationalism and the Chicano defense units.

3. EDUCATION: must be relative to our people, i.e., history, culture, bilingual education, contributions, etc. Community control of our schools, our teachers, our administrators, our counselors, and our programs.

4. INSTITUTIONS: shall serve our people by providing the service necessary for a full life and their welfare on the basis of restitution, not handouts or beggar’s crumbs. Restitution for past economic slavery, political exploitation, ethnic and cultural psychological destruction and denial of civil and human rights. Institutions in our community which do not serve the people have no place in the community. The institutions belong to the people.

5. SELF-DEFENSE: of the community must rely on the combined strength of the people. The front line defense will come from the barrios, the campos, the pueblos, and the ranchitos. Their involvement as protectors of their people will be given respect and dignity. They in turn offer their responsibility and their lives for their people. Those who place themselves in the front ranks for their people do so out of love and carnalismo. Those institutions which are fattened by our brothers to provide employment and political pork barrels for the gringo will do so only as acts of liberation and for La Causa. For the very young there will no longer be acts of juvenile delinquency, but revolutionary acts.

6. CULTURAL values of our people strengthen our identity and the moral backbone of the movement. Our culture unites and educates the family of La Raza towards liberation with one heart and one mind. We must insure that our writers, poets, musicians, and artists produce literature and art that is appealing to our people and relates to our revolutionary culture. Our cultural values of life, family, and home will serve as a powerful weapon to defeat the gringo dollar value system and encourage the process of love and brotherhood.

The definition of consorting with the enemy: habitually associate with (someone), typically with the disapproval of others. Obama is constantly associating with those who hold our culture, our form of government and our American values in contempt. One wonders who’s side he is on and when his actions become treason?

Update from The Blaze: 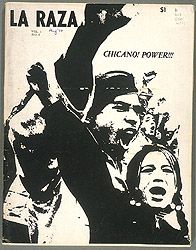 The progressive politically-connected National Council of La Raza has been a staple (illegal) immigration advocacy group on the left and has long benefited from the generous support of government financial grants. But according to an investigation by Judicial Watch, federal funding of the group “skyrocketed” shortly after one of its top officials got a job in the Obama White House.

Cecilia Munoz, La Raza’s senior vice president and lobbyist, joined the Obama administration as director of intergovernmental affairs in 2009. Since then, Judicial Watch reports, federal funding being poured into the organization has more than doubled: