Stated by a Muslim Liberal Democrat Marxist who worked and campaigned for Barack Obama:

“I want you to focus and I hope you can talk to your families and your friends and your neighbors that when someone says that there is a penetration of Jihadi Islamists within Canadian society, do not dismiss it as some right-wing xenophobic racist rant.

Today in the White House there are three members of the Muslim Brotherhood that influence Obama’s policy. 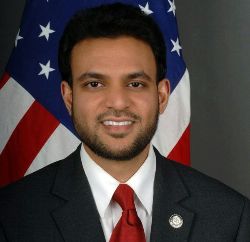 This is happening while we sit silent and I say that as a Liberal Democrat, as someone who worked and campaigned for Barack Obama.

We have evidence in Canada of this penetration that’s going on.”

Tarek Fatah, a moderate Muslim advocate and Liberal Democrat Marxist, told an auditorium filled with thousands of Canadians at Ideacity that “the religion of Islam is being used as a tool by a fascist force.”

“Instead of bringing victory over the fascist forces of the Muslim Brotherhood, we now recognize that their infiltration is right up to the American White House, but we can’t say that.”

“Today we are fighting another idea of Islamo-fascism that has shut our mouths and we can’t speak because we’re too scared that someone may turn around and call us a racist. And mind you, everyday as I speak, a few dozen Muslims would have been killed by now by these Jihadi’s.”

He says that he has seen his own “fellow travelers betray the cause of Social Justice and align themselves with the most horrendous fascists that you could ever meet.” The far-left has joined with radical Islamists and they are working together. Recall that Glenn Beck warned of this in January 2011 and now, from inside the Liberal Democratic movement, Tarek sees it with his own eyes and speaks out about it.

America’s government-controlled media fail to report the truth, which is why many Americans research, self-educate and become citizen journalists in order to bring you the truth. On this subject, we have previously explained that Islamism is not a religion; it is a complete system comprised of totalitarian rule over day-to-day life – political, financial, legal, social, cultural and religious – and its mission is Jihad. Tarek explains this too.

“Please understand that there is a distinction between Islam as a faith which, along with every other religion, has its own problems, and “Islamism,” which is an ideology, a political ideology, that says that Western Civilization has to be destroyed.”

“The books that are distributed at Eaton Centre and the Dundas Square clearly state by the founders of the Muslim Brotherhood that all Western countries have to be destroyed.”

Obama’s embrace of those who hate America and actively pursue the destruction of our country from within and externally has been on display for quite awhile and it’s time we see, speak and hear the truth.

Obama brought the Muslim Brotherhood into our White House; no one but Obama did this. He brought George Soros into our White House, an anti-Semite who aided the Nazi’s and a financial terrorist who is making billions off the economic misery Obama has purposely caused in our country. Many Americans fail to understand this while the media hides the truth. From corrupt dictators (e.g. inviting President Ali Bongo of Gabon to the White House) to domestic terrorists (e.g. Bill Ayers) to self-proclaimed Communist/Marxist (e.g. Van Jones), these, and many more like them, are the people Obama brings into our White House… these are his friends and associates.

“Allah is our objective, the prophet is our leader, the Koran is our law, Jihad is our way, dying in the way of Allah is our highest hope.”

“Jihad is our way” explicitly endorses the reinstatement of a worldwide Islamic regime.

As Tarek says, talk to your families, friends and neighbors; show them the warning from this Liberal Democrat Marxist (video below).

“Why is it happening? Because we are not speaking out. And the dangers we face… if we do not confront them today, our children will not forgive us tomorrow.”

25 thoughts on “Muslim Brotherhood In Our White House – Vetting Obama”