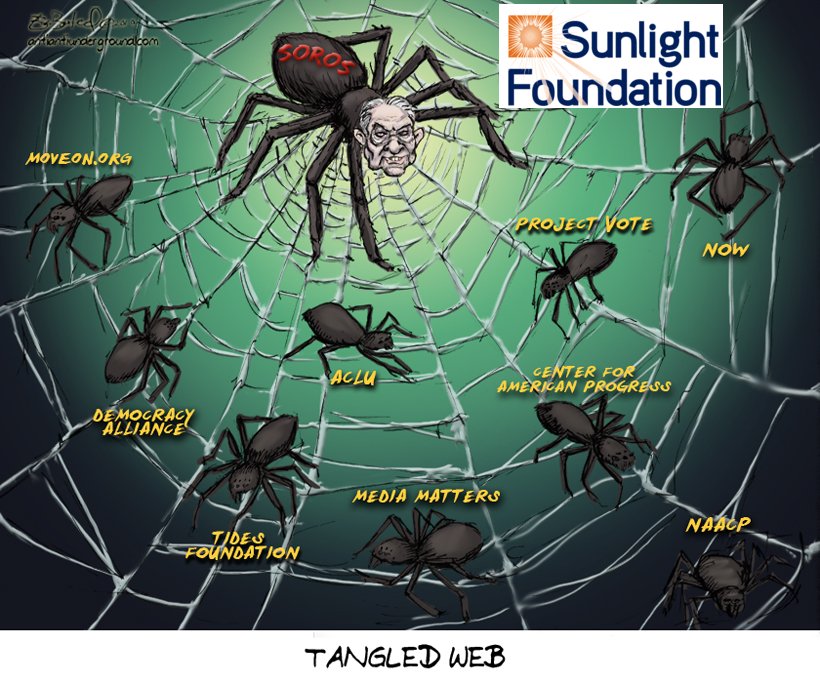 Sunlight is said to be the best of disinfectants; electric light the most efficient policeman. – Louis Brandeis

This is the defining statement that The Sunlight Foundation claims to base their cause on. Oh, if that were only even remotely true…

Founded in January 2006, the Foundation has a stated goal of using the revolutionary power of the Internet and new information technology to enable citizens to learn more about what Congress and their elected representatives are doing and thus help reduce corruption, ensure greater transparency and accountability by government and foster public trust in the vital institutions of democracy. At the declared core of all of the Foundation’s work is a focus on the power of technology and the Internet to transform the relationship between citizen’s and their government.

The truth is somewhat different however. The Foundation and its many tentacles, began in 2006 during the Bush Administration. I suspect it was meant to be used to skew political instances against the Republicans in order to assure an Obama win in 2008 – to snare them in a web of record so-to-speak. It made for a great political weapon and it certainly didn’t hurt. However, during the current Administration, much of what The Sunlight Foundation and its minions record is either soft-balled, inaccurate or twisted to make it look more favorable. Politics at its finest! It is a very insidious and clever form of propaganda, claiming one thing, while in reality doing the opposite. A classic Progressive tactic.

Claiming non-partisanship and not officially supporting any candidate, in 2007, the Foundation did have three specific priorities for the incoming Congress in 2007:

Now, I ask you, has ANYONE made any noise about the above three priorities during the Obama Administration that you know of? Token at best and primarily against the right side of the aisle. In fact the left side of the aisle has done the opposite of the above – they have gone all gonzo on financial corruption, meetings in secret, undecipherable legislation for nefarious purposes, power grabs and shredding the Constitution. Either The Sunlight Foundation is massively incompetent or corrupt. I vote for number two, Bob.

The Foundation’s initial projects – from the establishment of a Congresspedia, the making of “transparency grants” for the development and enhancement of databases and websites and two separate efforts to engage the public in distributed journalism and offer online tutorials on the role of money in politics efforts – are based on the premise that the collective power of citizens to demand greater accountability is the clearest route to reform.

Unfortunately, the supporters of The Sunlight Foundation are suspect and funding is provided, in part, by George Soros. Therefore, the transparency and the claim of participants of self-policing blogs etc., while reducing corruption and increasing accountability, is highly doubtful and most likely is being used to an extent as a propaganda outlet.

From Discover The Networks:

Michael Klein is co-founder and Chairman of The Sunlight Foundation. In January 2006, he retired from the law firm of Wilmer, Cutler & Pickering after 35 years as a practicing attorney. He now serves as a trustee of the American Himalayan Foundation and the Pen Faulkner Foundation.

A Senior Fellow at The Sunlight Foundation is veteran journalist and editor Bill Allison, who for nine years worked for the George Soros-funded Center for Public Integrity, where he co-authored The Cheating of America, whose central thesis holds that “the rich and powerful shirk their responsibilities” as taxpayers. Allison was also senior editor of The Buying of the President 2000 and co-editor of The Buying of the President 2004.

The National Director of The Sunlight Foundation is Zephyr Teachout, who formerly worked as a lecturer at the University of Vermont and was Director of Online Organizing for Howard Dean‘s 2004 presidential campaign. A licensed attorney, Teachout has represented indigent death-row inmates in North Carolina for the Center for Death Penalty Litigation; she was also the co-founding Executive Director of the Fair Trial Initiative, a fellowship program that trains young lawyers in death penalty trial work.

The Sunlight Foundation’s major disbursements (ranging from $25,000 to $325,000) in 2006 included grants to Citizens for Responsibility and Ethics in Washington (which also has received financial backing from George Soros‘ Open Society Institute, Democracy Alliance, the Tides Foundation, the Streisand Foundation and the Arca Foundation), the Young Elected Officials Network, (a project of People for the American Way), MAPLight.org, the Center for Responsive Politics, OMB Watch, the Center for Media and Democracy, the Center for Citizen Media, NewAssignment.Net, Room Eight, the Project on Government Oversight and ReadtheBill.org. Smaller grants (ranging from $1,650 to $16,000) were made to Metavid, More Perfect, Arizona Congresswatch, the Connecticut Local Politics Blogspot, WashingtonWatchdog.org, the National Institute on Money in State Politics, the Project on Government Oversight and the BluegrassReport.

Are you seeing a pattern yet? I am. Almost all of these lean left and/or are Progressive. Well spent funds indeed.

The Sunlight Foundation website features or featured four blogs on the subject of ethics and money in Washington D.C.; they are run by four of its principals: Citizen’s Notebook (Zephyr Teachout); Sunspots (Ellen Miller); Under the Influence (Bill Allison) and Dollarocracy (Larry Makinson). I’m not sure if all of these still exist, but they are leftist in nature and purpose. The Sunlight Foundation’s site currently reads like a conservative hit piece.

That’s just 2011. Question – is charity in the name of political expediency still charity? The Foundation doesn’t try to hide any of its connections – it’s right there for all to see. George Soros is The Open Society Institute. Do you really think these organizations are being ethical and transparent when they are bought and paid for by the likes of George Soros? If you do, I have a bridge to sell you and some great swamp land that you really must see or not.

Just how deep does Sunlight go down the Soros spider hole? All the way to the bottom baby. Don’t mistake sunlight for an on-coming Progressive freight train bent on manipulating political data online.

19 thoughts on “Sunlight Down the Spider Hole”