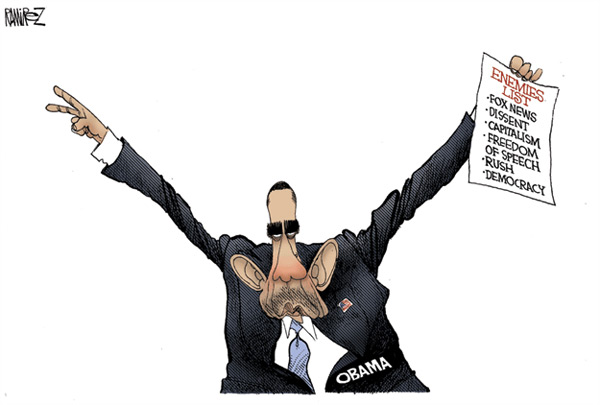 In the notorious tradition of Nixon’s Enemies List, Obama is now openly persecuting patriots at every opportunity. He tries to shame them, taint them, marginalize them and if all that doesn’t work, he sends goons after them and either imprisons them or threatens them with imprisonment. He’s using every agency at his disposal, with a special emphasis on the EPA, FDA, IRS, SEC, ATF and Fish and Wildlife authorities. And he has hired a whole governmental ‘army’ to enforce his dictates and go after his enemies. Welcome to the American Stasi.

We have watched how Obama smears those who would dare to donate to Mitt Romney’s campaign. That should make us want to donate even more, not back down and cower in fear. We all know that Obama is determined to be reelected legally or illegally – he doesn’t care. He just wants to hold on to his power, so he can finish what he started – destroying America with his pathological politics of corruption, greed and evil. If the elections don’t suffice, he’ll invent an emergency to ensure his death grip on the throat of America.

Look at how Gibson Guitars has been treated. They have been raided multiple times, but they can’t defend themselves because in the last three years, this administration won’t say what crime they are charging them with. They are destroying a good and honest company that creates jobs and does business production here in America. Their crime – successful capitalism. Something Obama will not tolerate.

Then there are farmers. The EPA is clamping down on the Amish and others who don’t follow every regulation in an effort to put them out of business and it is working. I hear the stealthy, sly footsteps of Cass Sunstein. Soon, very soon, the government will control all our farmland and food. Then if you step out of line, they’ll just starve you to death. Farming on your own property will be illegal. It’s coming – bet on it. Right now they are seizing farmer’s bank accounts. The FDA is now using the terrorist based “Bank Secrecy Act” as justification to invade, investigate and even confiscate the bank accounts of Americans in the agricultural business.

The Bank Secrecy Act that came out of the events of 9/11, which has been expanded during the decade long war on terror, is now being used to criminally attack farmers who choose not to use banks as their sole or primary source for monetary transactions. This is especially relevant after the credit crisis of 2008, where many American[s] began withdrawing money from banks after bank solvency came into question.

This banking law, which allows for the unwarranted confiscation and seizure of funds based solely on perceived impropriety, is one of many new policies created under the Bush and Obama administrations to control the public, and the flow of money in the United States. Beginning in 2013, new capital controls are set to be implemented which will make it extremely difficult to move dollars in and out of the country, and more recently, the Obama administration diverted funds from other departments to hire thousands of IRS agents for the new healthcare system that will also commence in 2013.

Glenn Beck – We Are All Criminals Now

Now, we turn to Ted Nugent, who has been all over the news as of late. Evidently Obama has had Ted Nugent in his sights for at least two years and probably much longer. Nugent was charged with breaking a law – of which the judge hadn’t even heard – while hunting black bear in Alaska. But you can bet the Feds did and they brought charges hoping to snare Nugent. But that didn’t work out as they intended – Nugent accepted that he ‘unknowingly’ broke the law and the sentence carried the same weight as jaywalking, a misdemeanor offense. They tried to snag him in California and accused him of baiting a deer. A total falsehood and you’d have to be a moron to do it since he was airing the episode on TV. They stormed three of his friends’ homes and then searched a room not covered by the search warrant. They found a set of brass knuckles and told Nugent’s friend they would drop the felony charge if he would help them ‘get’ Nugent. Fortunately Ted has very good friends. But they took all kinds of stuff from their homes.

Now, they have made Nugent slaughter his pigs in Michigan – labeling them as feral. Since when is livestock you keep in a pen ‘feral?’ Obviously they either don’t know or more likely, don’t care what the definition is. They were the wrong color and thus deemed ‘feral’ and Nugent was forced to slaughter them. It’s tempting to draw conclusions about motives related to winning points with the Dearbornistan locals, given that the “reason” for slaughtering the pigs is clearly a pretext; one wonders to oneself, could squeezing pig farmers be calibrated to curry favor with a Muslim community?

He’s also been persecuted for his Oryx in Texas as well. They are harassing him about raising these animals when he brought them back from the brink of extinction. A three legged little one was born and he is not being allowed to put it out of its misery. It will die a slow and painful death. How is that compassion? If he puts it down, it’s a felony.

Someone high up would not allow Nugent to attend a SEAL’s funeral when it was the hero’s final wish. His concerts have been cancelled in several cases as well. The Feds interviewed him over comments he made at an NRA conference recently. He was cleared, but I guess free speech is no longer very ‘free’ in this country. Nugent is a good man – a patriotic man. That’s a lot more than you can say about Obama and his thugs.

This isn’t just about Ted Nugent folks – it’s about each and every one of us. They are coming after the bloggers, the patriots, small businesses, you name it. There is no way we can avoid violating one of these bogus laws. It’s only a matter of time. Obama doesn’t care about the Constitution – it means nothing to him. They are coming and we had better stand together, or we will all hang separately as patriots. The way Nugent is being treated is absolutely disgraceful.

From Kim Strassel at the Wall Street Journal:

He’s targeted insurers, oil firms and Wall Street—letting it be known that those who oppose his policies might face political or legislative retribution. He lectured the Supreme Court for giving companies more free speech and (falsely) accused the Chamber of Commerce of using foreign money to bankroll U.S. elections. The White House even ginned up an executive order (yet to be released) to require companies to list political donations as a condition of bidding for government contracts. Companies could bid but lose out for donating to Republicans. Or they could quit donating to the GOP—Mr. Obama’s real aim.

We all know of Obama’s Enemies List, but do you know who his predatory partners are? Along with Communists and radicals, he has a special fondness for the Muslim Brotherhood. In fact, he has opened the front door of the White House and has told them to make themselves at home. These are the evil asshats who support and fund Hamas. These are Islamic terrorists of the ilk that carried out 9-11 and Obama embraces them while persecuting American patriots.

Obama is not even subtle about it. They have removed all references to radical Islam in federal publications. They allow Shariah Law to be carried out on American soil. Obama’s best friend is the Prime Minister of Turkey who gives him advice on his daughters. You see, it doesn’t matter whether Obama is a Muslim or not, his father was. Obama has Islamic street cred. It even gives him a basis for using Taqiyya against Americans. Obama is actively and aggressively promoting Islam around the planet and especially here at home. The only thing that matches his love of Islam, is his hatred of Israel.

If one is known by who his friends and enemies are, then Obama’s predatory partners and the patriots he persecutes are screaming volumes at us. It’s clear that his campaign of pathological politics and communism is on a set of tracks that leads somewhere we dare not go.