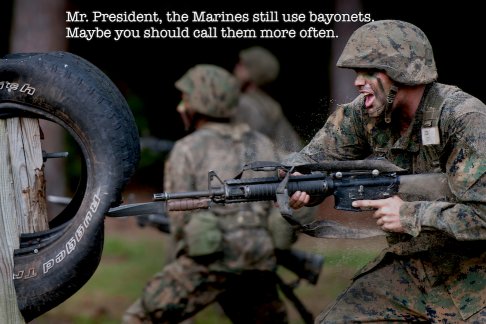 To send President Obama’s snide little comment from last night’s debate right back at him, he needs to find out how our military actually works. He could start by talking to a Marine or a soldier who’s had his or her life saved because he or she knew how to put their bayonet training to use.

Or to the men of the 10th Mountain, some of whom I’m honored to be acquainted with, who participated in an amazing but under-reported endeavor known as Operation Mountain Thrust. It involved them landing by helicopter on the side of a mountain to outflank the Taliban, a position the jihadis thought was inaccessible. Horses and donkeys were used to cart supplies in on a daily basis.

This week, The Grouch and The Pirate’s Cove took advantage of my generous offer of link whorage and earned honorable mention status with some excellent pieces they sent in.

Simply head over to Joshuapundit and post the title and a link to the piece you want considered along with an e-mail address (which won’t be published) in the comments section no later than Monday 6 PM PST in order to be considered for our honorable mention category. Then just return the favor by creating a post on your site linking to the Watcher’s Council contest for the week when it comes out Wednesday AM.