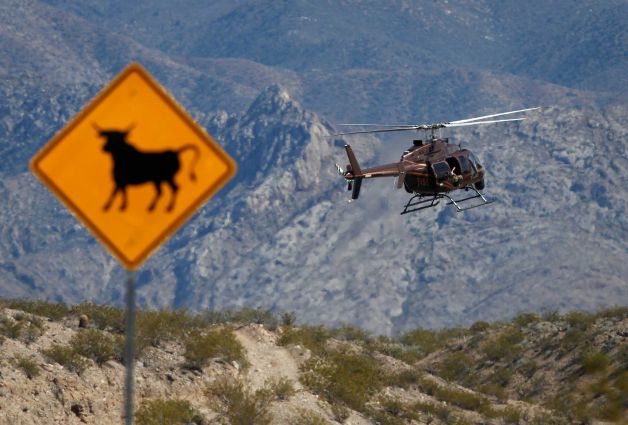 Update: Sheriff Gillespie has stated that the BLM is standing down.

See my previous posts on this:

The latest in the Bundy Ranch standoff is coming in this morning. It seems the FAA has designated the airspace over the area a No-Fly zone now – no news helicopters allowed:

And although there were reports that cell towers were being blocked, as of right now, it appears that is not the case. More likely the media was hogging bandwidth. Will watch that. Rumors are running rampant, so be careful what you believe. I have also heard Feds were searching cars and seizing guns. This is from the Bundy web site. Things look to escalate and fast today as the Oath Keepers and militias arrive en force. DHS is also incoming according to reports on the ground.

As many of you know, one of my top favorite blogs out there is SurvivalBlog. Level headed guys who know their stuff. Along with Dana Loesche and Allen West, they are supporting the Bundy Ranch. I want to give you their spot on analysis from today:

The Bundy Ranch continues to spiral with the BLM not backing down, and the militias are beginning to show up. This escalation of the conflict is not good and will result in bloodshed, unless the federal government backs down. For those who are not sure about what rights are being violated, I’ve broken it down into several sections here:

And there is other suppressed case history in Nevada that is worth a read here.

So far, I’ve heard elected officials are coming from Arizona, Utah, Washington and Montana. Others are considering it as well. Michele Fiore is on the ground with the protesters and doing a fantastic job (I knew she would!). TheBlaze, who has been on the wrong side of the argument (and still is pretty much), posted a great interview with Michele:

Fiore, a Republican, said Friday she has been making the 80-mile drive from Las Vegas to a growing tent city of militia members, advocates and protesters in dusty but scenic rangeland near Bundy’s ranch, just east of the Virgin River. She said she was horrified that BLM police used stun guns on one of Bundy’s adult sons during a Wednesday confrontation on a state highway near the Bundy melon farm in the Gold Butte area.

By all accounts, the Feds have hundreds of vehicles there now and they are gearing up for a confrontation. They are not just pushing in Nevada either. Now the BLM is in my backyard. They are looking to seize 90,000 acres of the Red River from Texas. If they do, it will change the boundaries between Texas and Oklahoma, just as the BLM/EPA did to Wyoming. Texas gets screwed in the process. Since when does the government get to just ‘redraw’ state lines? People own that land and have been paying taxes on it for over 100 years. Sound familiar? We are all Nevada ranchers now.

In Utah, the BLM is doing as crappy a job at range management as they do in Nevada apparently. There is a dust up there now over 2,000 wild horses that are taking over grazing areas that cattlemen are paying fees on. The environmentalists want the horses to win, the ranchers want the cattle to have priority because they are paying the Feds for that right.

These fights are happening all over the west, every hour of every day. The BLM and the government are hated and rightly so. The Feds want power and control — we just want to be left the hell alone.

When the government was cornered yesterday and asked if they were euthanizing Bundy’s cattle, they had no comment. I told you days ago they were doing it and were lying about it. What else are they lying about? You could start by asking Clean Face Harry Reid who has his buddy heading the BLM in Nevada and stands to make millions on shady real estate deals if he can just get rid of these pesky ranchers.

In typical Marxist fashion, the SPLC just labeled 67 year-old, Mormon cattle rancher, Cliven Bundy a domestic extremist. In fact, what the BLM and Feds are doing here is nothing less then domestic terrorism on Americans.

In the end, this is not about grazing fees, grazing rights or court orders. It goes way deeper than that. This is about our Constitutional freedoms and the government militarizing up, treating the west as a territory and not as sovereign states and people as slaves, not Americans. Will the people become the Fed’s cattle or will we fight for our God-given freedoms? I believe the time has come that the question must be answered.

Playing cowboys and Feds probably will end badly, but at some point, patriots have to make a stand. Time to choose a side and dig in.

6 thoughts on “Playing Cowboys And Feds”