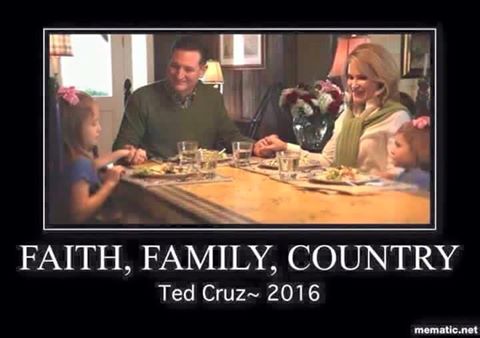 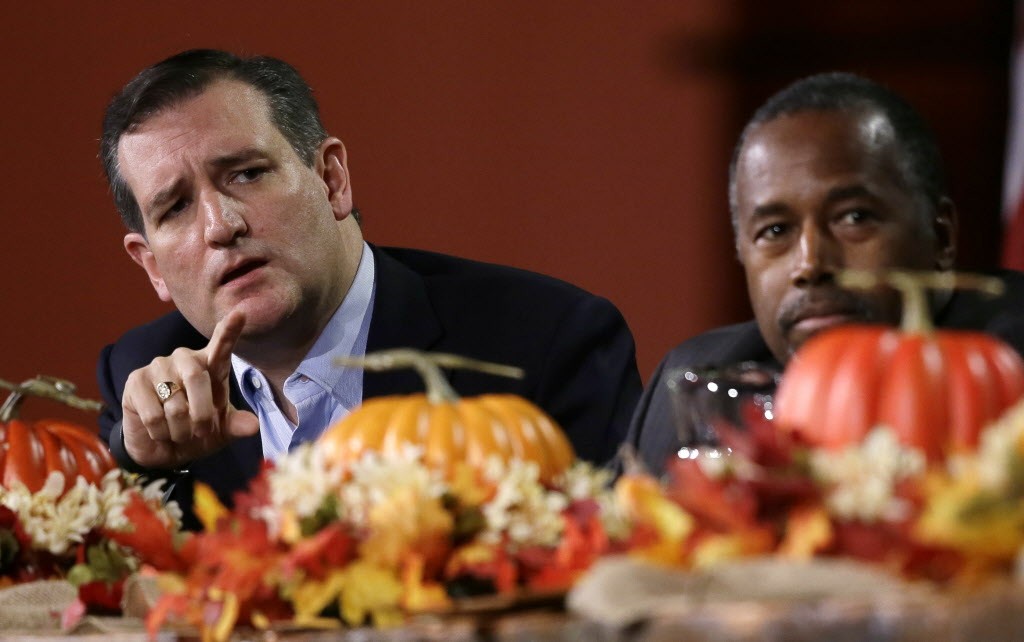 I always cheer up immensely if an attack is particularly wounding because I think, well, if they attack one personally, it means they have not a single political argument left. – Former British Prime Minister Margaret Thatcher

I have neither curiosity, interest, pain nor pleasure, in anything, good or evil, they can say of me. I feel only a slight disgust, and a sort of wonder that they presume to write my name. – Percy Bysshe Shelley

The media’s the most powerful entity on earth. They have the power to make the innocent guilty and to make the guilty innocent, and that’s power. Because they control the minds of the masses. – Malcolm X

This week’s winning essay, Bookworm Room’s The Wall Street Journal’s hatchet job on Ted Cruz, is pretty much about what the title implies it is. As Republican presidential candidate Ted Cruz continues to rise in the polls, like Donald Trump he becomes a target for character assassination and trial by media… not just for his conservative principles, but in particular for his positions on illegal migration. That’s an issue dear to the heart of both Leftist Democrats and as we see here, the GOP establishment. Bookworm takes this effort by Kim Strassel apart in her usually erudite fashion. Here’s a slice:

I’ve made no secret of the fact that I support Ted Cruz. I realize he’s not perfect, but no candidate is. What matters to me is that his political values most closely align with mine, that he’s not scared of a fight (and, especially, he’s not scared of the media), and that he is truly smarter than just about everyone else out there. I learned yesterday, though, that Kimberley Strassel at the Wall Street Journal most definitely does not like Cruz. She wrote a savage hit piece on him essentially blaming him for ISIS’s ability to spread throughout the United States. (That spread, of course, has nothing to do with Obama’s open borders policy and the contempt he shows for every person and idea that suggests that Islam might have a problem.)

But before honing in on her perception about Cruz’s alleged security failures, Strassel first lambastes him as a rank opportunist who cares only about self-aggrandizement and refuses to take care of the GOP’s needs:

The senator’s supporters adore him because they see him in those moments when he has positioned himself as the hero. To them he is the stalwart forcing a government shutdown over ObamaCare. He’s the brave soul calling to filibuster in defense of gun rights. He’s the one keeping the Senate in lame-duck session to protest Mr. Obama’s unlawful immigration orders.

Mr. Cruz’s detractors see a man who engineers moments to aggrandize himself at the expense of fellow conservatives. And they see the consequences. They wonder what, exactly, Mr. Cruz has accomplished.

ObamaCare is still on the books. It took the GOP a year to recover its approval ratings after the shutdown, which helped deny Senate seats to Ed Gillespie in Virginia and Scott Brown in New Hampshire. Mr. Obama’s immigration orders are still on the books. The courts gained a dozen liberal judges, all with lifetime tenure, because the lame-duck maneuver gave Democrats time to cram confirmation votes through. Mr. Cruz’s opportunism tends to benefit one cause: Mr. Cruz.

So it’s Cruz’s fault we have Obamacare and it’s his fault because . . . he took a principled stand against it? (I admired that stand when he took it and I still do.) The fact is that Cruz is one of the few Republicans in Congress who actually stood by the party planks and actual promises he and other alleged conservatives made to voters since 2008. He is the only one in Congress on the right who shows the slightest bit of spine. So when Strassel writes, “but Obamacare is still on the books,” the real question shouldn’t be “How do we blame Ted Cruz?” Instead, the real question should be “How did this happen when Republicans control Congress and the purse strings?”

Strassel’s claim that, following Cruz’s principled stand, it took Republicans “a year to recover,” is patently ridiculous. Republicans have enjoyed greater electoral success in the past six years than the party ever has — and she is going to blame defeats in Virginia and Massachusetts on Cruz. That is infuriating.

The above insults are just throat-clearing for Strassel’s real issue: Ted Cruz has made us less safe than we should be because he refuses to authorize the government to turn America into even more of a police state with endless spying on citizens:

Mr. Cruz regaled the crowd about how he had opposed a proposal to intervene in Syria and how he doesn’t support “nation building.” To this he could add a few others: He has consistently voted against defense reauthorization bills that enable troop funding. And this spring he ginned up support to pass a law that undercuts the National Security Agency’s ability to use metadata to root out terror plots. Mr. Cruz, citing “privacy rights,” co-sponsored the bill, along with Chuck Schumer, Dick Durbin, Al Franken and Barbara Boxer.

It may have seemed like a good idea to Mr. Cruz at the time. But after Paris, he finds himself with a national security agenda that is increasingly at odds with the public will. Florida’s Marco Rubio (who opposed the NSA bill) had fun this week reminding Americans of the stark foreign-policy differences between himself and the Texan, noting that Mr. Cruz has supported laws that “weaken U.S. intelligence.” Mr. Rubio, who has delivered at least 10 major foreign-policy addresses in the past few years, is running as the unabashed hawk, calling for robust new U.S. world leadership. Mr. Cruz may have walked himself into playing the counterpoint—a Rand Paul stand-in.

Strassel is snide — and she is wrong. Cruz is absolutely right to place limits on the NSA and meta-data. As is developed at some length my post about a talk by Mary Theroux of the Independent Institute, all of us should be deeply suspicious about our government at this point — a government that hoards people’s information like a miser and that is becoming ever more out of control and the master, not the servant, in this country:

The government’s spying on American citizens is so enormous we literally cannot comprehend its scope. The data collection (which is in the multiple zetabytes) grossly violates our inherent Fourth Amendment right to be free from unreasonable search and seizure. NSA employees before Snowden tried to blow the whistle on this beginning around the year 2000, and got ferociously persecuted by the government because of their efforts. Snowden’s spectacular leak broke that log jam.

But here’s the really important thing that Theroux said: The government gets so much data, it’s useless for the stated purpose of crime and terrorism prevention. As it comes in, it’s simply so much white noise. It certainly didn’t stop 9/11 or the Boston bombing. In this regard, think of England, which has more CCTVs per capita than any other country in the 1st world, and maybe in any world. Nevertheless, these cameras do nothing to prevent crime. As the number of cameras has increased, so has the crime rate. The data is useful only after the fact, to help (sometimes) apprehend the criminal.

Well, one can argue that ex post facto apprehension is a good thing — but it’s a good thing only if there’s been a clear violation of a pretty well known law (e.g., don’t beat people to death or don’t rob a jewelry store). We’re looking at something much more sinister here. Think of the volume of law in America and, worse, think of the staggering volumes of rules interpreting those laws.

As Theroux noted, Stalin’s chief of police famously said (and I’m paraphrasing) give me the man and I can find the crime. We Americans have a government that’s sitting on data that can be used to criminalize us after the fact the current government (Republican or Democrat or Third Party) doesn’t like us. It’s like a landmine under every American.

No thinking citizen should trust a government that produces a Lois Lerner and then protects her from indictment, even though at least one of the charges against her is that she released private data the IRS held to Democrats for partisan purposes. Nor are abusive employees the only problem. Don’t forget that the government is so dysfunctional that the Office of Personnel Management allowed personal information for millions of employees (including social security numbers and security check information) to get into hackers’ hands. Our government has proven itself to be both corrupt and incompetent, yet Strassel excoriates Cruz for refusing to give it an even longer leash.

Here’s the reality: All that meta-data the government collected has yet to be used to stop a single terrorist incident. All it does is collect more and more information that our government can use against us. It is an Orwellian nightmare that Stalin and other authoritarians of whatever stripe could only dream of having. If it had stopped the Tsarnaev brothers, or any of the other attacks on our soil, perhaps we should feel differently, but there is no evidence that it has made any real difference.

Our Founding Fathers had several guiding principles, one of which is that the good intentions of a benevolent government could not be trusted in perpetuity. The Founders loved George Washington and would have elected him King, but they were worried that a George Washington III might prefer to be a tyrant.

Much more good stuff at the link.

In our non-Council category, the winner was Victor Davis Hanson with Obama Has Just Begun, submitted by Fausta’s Blog. Hanson, a classist and historian as well as a stunning writer tells us baldly that this last year of Barack Hussein Obama’s presidency is likely to be the most dangerous for the country – and why. This is a must read.

Here are this week’s full results. A number of our members – Fausta, GrEaT sAtAn”S gIrLfRiEnD, Nice Deb, The Noisy Room and Puma By Design were unable to vote this week, but were not subject to the 2/3 vote penalty:

Make sure to tune in every Monday for the Watcher’s Forum and every Tuesday morning when we reveal the weeks’ nominees for Weasel of the Week!