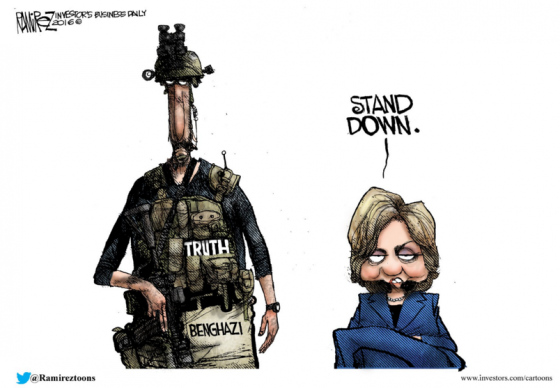 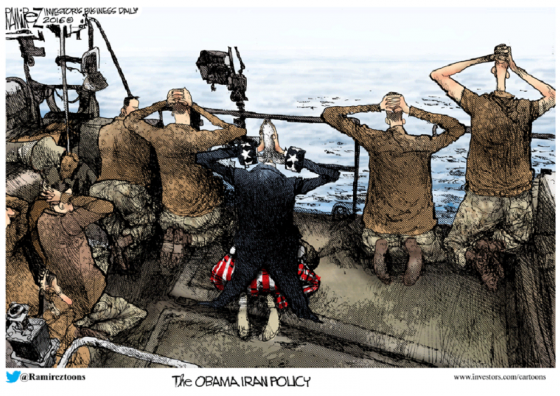 If you will not fight for right when you can easily win without blood shed; if you will not fight when your victory is sure and not too costly; you may come to the moment when you will have to fight with all the odds against you and only a precarious chance of survival. There may even be a worse case. You may have to fight when there is no hope of victory, because it is better to perish than to live as slaves. – Sir Winston Churchill

Let’s set the record straight. There is no argument over the choice between peace and war, but there is only one guaranteed way you can have peace–and you can have it in the next second–surrender. – President Ronald Reagan

Peace, above all things, is to be desired, but blood must sometimes be spilled to obtain it on equable and lasting terms. – President Andrew Jackson

This week’s winning essay, Joshuapundit’s Barack Obama’s Real Legacy – America, Humiliated, is about America’s recent interaction with Iran. It reveals why everything the Iranian and our State Department told us about the recent incident with two of our naval vessels are outright lies and in particular why Iran chose that particular time for this incident. Here’s a slice:

When is a world power in serious decline? One indication is when neither its leaders, its military or its citizens begin losing the ability to command respect from foreign powers.

Our recent engagement (if you could call it that) with Iran is one shameful indication of such a decline.

The official story out of Washington is that two of our Riverine gunships manned by U.S. Marines somehow accidentally wandered off course into Iranian territory, where one of them broke down. The Iranian IRG naval forces showed up,impounded the two boats and detained our sailors briefly, repaired the damage and after an apology and confession of wrongdoing from the American commanding officer sent them on their way. Much was made of how kindly the Americans were treated by their captors, and how this was a triumph of diplomacy, exactly why the Iran deal needed to be implemented.

Most of the above paragraph is sheer horse manure. Instead, the capture of the two gunboats was deliberately planned and carried out in international waters and designed to send a sharp message the White House, which shamefully collaborated in this farce.

The gunboats were reported taken near Farsi Islands, which is the official naval base for the Iranian Revolutionary Guard. According to the White House, these two boats were en route to Kuwait from our base in Bahrain. Since these boats are shallow draft vessels, they could have sailed fairly close to the Arabian side of the Gulf, hugging the shoreline. These are fast boats, and the trip should have taken just over an hour.There was no reason to go anywhere near Iran.

Somehow, these two gunboats wound up 70 miles off course, near an IRG naval base. And captured by what amounts to a couple of small motor boats with a fraction of their armaments and manpower:

Given the advanced radar, GPS systems and skill of the crew, does it seem logical that these two gunboats would err this much? The answer, of course is that they didn’t.

Former SEAL Matt Bracken caused a firestorm online with comments on Twitter and Facebook, and what he had to say was corroborated from one of my regular readers who shared his knowledge of these kinds of missions.

For an open-water transit between nations, the course is studied and planned in advance by the leaders of the Riverine Squadron, with specific attention given to staying wide and clear of any hostile nation’s claimed territorial waters. The boats are given a complete mechanical check before departure, and they have sufficient fuel to accomplish their mission plus extra. If, for some unexplainable and rare circumstance one boat broke down, the other would tow it, that’s why two boats go on these trips and not one! It’s called “self-rescue” and it’s SOP.

This entire situation is in my area of expertise. I can state with complete confidence that both Iran and our own State Department are lying. The boats did not enter Iranian waters.

What likely happened is that IRG forces intercepted the two gunboats on the normal route between Bahrain and Kuwait, jammed their communications and ordered them back to Farsi Island. The gunboats likely cooperated because they were ordered not to create an incident. And their ROE prohibit them from firing unless they were fired upon by their superiors. It’s quite likely the IRG was aware of these rules of engagement.

The IRG stripped the ships of their GPS units and all communications devices and even took the sim cards from the crew’s cellphones, so no real record of where the gunboats were actually seized would exist. Then they forced them to pose on their knees, to take pictures that went all over the world. And of course, there was that confession by the captain of violating Iranian waters:

The Iranians made a huge propaganda coup out of this:

A senior Iranian military commander in charge of the country’s Revolutionary Guard Corps claimed that the 10 U.S. sailors who were recently captured and subsequently released by the Islamic Republic “started crying after [their] arrest,” according to Persian language comments made during military celebrations this weekend.

Hossein Salami, deputy commander of the IRGC, which is responsible for boarding the U.S. ships and arresting the sailors, claimed in recent remarks, the “American sailors started crying after arrest, but the kindness of our Guard made them feel calm.”

Hossein went on to brag that the incident provides definitive evidence of the Iranian military’s supremacy in the region.

“Since the end of the Second World War, no country has been able to arrest American military personnel,” the commander said, according to an independent translation of his Persian-language remarks made Friday during a “martyrs’ commemoration ceremony” in Isfahan.

“I saw the weakness, cowardice, and fear of American soldiers myself. Despite having all of the weapons and equipment, they surrendered themselves with the first action of the guardians of Islam,” Ahmad Dolabi, an IRGC commander, said in Persian-language remarks at a prayer service in Iran’s Bushehr providence.

“American forces receive the best training and have the most advanced weapons in the world,” he added. “But they did not have the power to confront the Guard due to weakness of faith and belief.”

Much more at the link, including Iran’s motivation for doing this when they did.

In our non-Council category, the winner was Michael Totten with North Africa Exports Rape Culture to Germany submitted by The Razor.

Totten is one of the more knowledgeable commentators on the Middle East, simply because he reports what he sees on the ground in person rather than sitting in an air=conditioned hotel while some stringer he hired tells him what the local powers that be want him to hear. In this article he discusses what’s going on in Europe right now and reveals it as an inherent part of the culture these refugees come from. Do read it.

Here are this week’s full results. The Right Planet was unable to vote this week and one other member submitted an incomplete vote in the non-Council category. Neither was subject to the usual 2/3 vote penalty for not voting: