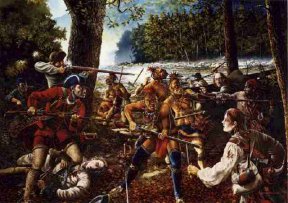 The French and Indian War, as the Americans called it, was a phase, and perhaps the most important one, of a global conflict (called by some historians the Seven Years’ War, by others the Great War for the Empire) between France and Britain, fought over the issue of which empire would control the future of the North American continent. In the American colonies, the war broke out in the Pennsylvania wilderness on May 28, 1754, when George Washington, aged twenty-two, attacked a small French force at Great Meadows. Washington was forced to surrender on July 3, but this was only a minor skirmish; the war began in earnest the following year, when General Braddock attempted to capture Fort Duquesne, which the French had recently built on the site of what is now Pittsburgh. Braddock’s regulars — Colonel Washington was a member of the general’s staff — had chopped their way westward for over a month through dense forest. On July 9, 1755, they were surprised by a small force (mostly Indians) seven miles from the fort that was their objective. The ensuing fight ended in a complete rout of the British; Braddock was killed, and Dunbar, the new commander, led the survivors — only about 1,500 out of an original 2,500 — back to Philadelphia. Despite Braddock’s crushing defeat, the bravery of the “Virginia blues” was caught up in the postwar myth of the vast superiority of the quick-witted American farmer-soldier over the British regular. In the following letter, written by Washington to his mother on July 18, Washington described the battle, and told her of his near escape from death.

As I doubt not but you have heard of our defeat, and, perhaps, had it represented in a worse light, if possible, than it deserves, I have taken this earliest opportunity to give you some account of the engagement as it happened, within ten miles of the French fort, on Wednesday the 9th instant.

We marched to that place, without any considerable loss, having only now and then a straggler picked up by the French and scouting Indians. When we came there, we were attacked by a party of French and Indians, whose number, I am persuaded, did not exceed three hundred men; while ours consisted of about one thousand three hundred well-armed troops, chiefly regular soldiers, who were struck with such a panic that they behaved with more cowardice than it is possible to conceive. The officers behaved gallantly, in order to encourage their men, for which they suffered greatly, there being near sixty killed and wounded; a large proportion of the number we had.

The Virginia troops showed a good deal of bravery, and were nearly all killed; for I believe, out of three companies that were there, scarcely thirty men are left alive. Captain Peyrouny, and all his officers down to a corporal, were killed. Captain Polson had nearly as hard a fate, for only one of his was left. In short, the dastardly behavior of those they call regulars exposed all others, that were inclined to do their duty, to almost certain death; and, at last, in despite of all the efforts of the officers to the contrary, they ran, as sheep pursued by dogs, and it was impossible to rally them.

The General was wounded, of which he died three days after. Sir Peter Halket was killed in the field, where died many other brave officers. I luckily escaped without a wound, though I had four bullets through my coat, and two horses shot under me. Captains Orme and Morris, two of the aids-de-camp, were wounded early in the engagement, which rendered the duty harder upon me, as I was the only person then left to distribute the General’s orders, which I was scarcely able to do, as I was not half recovered from a violent illness, that had confined me to my bed and a wagon for above ten days. I am still in a weak and feeble condition, which induces me to halt here two or three days in the hope of recovering a little strength, to enable me to proceed homewards; from whence, I fear, I shall not be able to stir till toward September; so that I shall not have the pleasure of seeing you till then, unless it be in Fairfax…

I am, honored Madam, your most dutiful son.