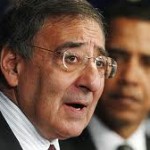 From Cliff Kincaid of America’s Survival:

We are planning to release more sensational details about CIA director Leon Panetta’s relationship with Communist Hugh DeLacy, himself linked to a communist spy ring. The Panetta story could be just as big as Alger Hiss. But we need conservative Senators to raise a ruckus. Otherwise, his nomination as Defense Secretary could sail through on Tuesday.

In a column about how the media — liberal and conservative — are mostly ignoring our revelations, Wes Vernon writes:

If Panetta’s nomination for Secretary of Defense makes it through the Senate Armed Services Committee — and barring indications to the contrary, it would appear “the skids are greased”— then what? Is there not one conservative senator prepared to raise this issue on the floor when the confirmation is up for debate? Not one? Why?

Don’t let this happen. Please contact your members of the Senate at 202-224-3121 and demand that Panetta be thoroughly investigated before he is confirmed for another sensitive national security post with access to classified information.

Please also specifically contact Senators David Vitter (202) 224-4623 and James Inhofe (202) 224-4721. Ask that they put a hold on the Panetta nomination so the information about his communist connections can be reviewed by the FBI.

“…DeLacy was not only a prominent member of the Communist Party USA, but also a personal contact of identified Soviet spies Solomon Adler and Frank Coe and accused spy John Stewart Service, and one has to wonder: What was there about DeLacy’s background and record that attracted the friendship of the man who is now CIA Director and has been nominated to assume an even higher national security post — Secretary of Defense?”