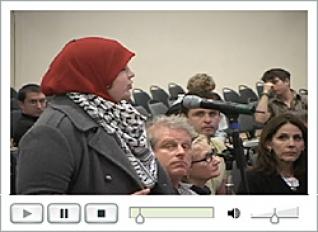 Read more at The Blaze… No really. 🙂

TIME reported on the amabassador’s visit. Mass arrests followed his trip to Hama.

After weeks of cautious, careful U.S. criticism of Assad, Ford’s physical presence in the city that has now defied both Assads — the father and former President Hafez, and his son Bashar — was a hugely symbolic, indeed taunting, gesture, one soon mimicked by the French ambassador. But will it do more harm than good?

Amateur video posted on YouTube showed the U.S. ambassador — or, at least, his champagne-colored jeep — being warmly received by olive-branch-waving Syrians as they chanted, “The people want the fall of the regime” and “We will only kneel to God.” Some demonstrators placed red roses on the windshield and hood of the vehicle as a male voice, presumably that of the cameraman, said the U.S. ambassador had visited Hama “to see the humanitarian situation for himself.” State Department spokeswoman Victoria Nuland said Thursday that Ford (who left Hama Friday afternoon) met with residents. He also visited a hospital, according to several accounts, in a trip that infuriated Syrian officials. See a photo-essay of protests in Syria.

Damascus quickly characterized the ambassador’s visit as being consistent with the regime’s longstanding argument that anti-Assad protesters were either actively or unwittingly part of a foreign conspiracy to bring down the Assad government because of its anti-Israeli foreign policy and its close ties to Iran. The trip was “clear evidence of the U.S. involvement in the ongoing events in Syria and its bids to aggravate the situations which destabilize Syria,” the regime said via its national news agency SANA.

Bouthaina Shaaban, Syria’s presidential and media adviser, told the BBC on Friday that Ford had not asked for permission to visit the restive city and described Ford’s action as “an escalation” that had created “great protest and resentment among the Syrian people.” The Interior Ministry also weighed in, branding those Ford met with as “saboteurs” whom he had “incited to more violence and [to] protest and to refuse dialogue.”

Some anti-Assad Syrians did not approve of the Ford visit. On Twitter, Shakeeb al-Jabri, whose profile says he is a Syrian living in Beirut, said Ford’s visit may backfire. “Some on-the-fence Syrians did not appreciate Ford’s visit to Hama,” he wrote. “They see it as meddling. Even those leaning more to the side of the revolutionaries. The US, especially the US, should butt out.”

La Raza Group Teams Up With Feds To Push Govt. Aid In Spanish